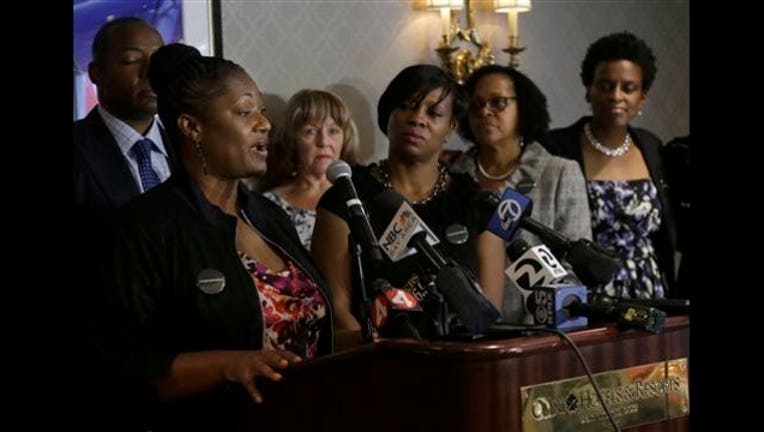 Tira McDonald, left, one of the plaintiffs filing a lawsuit over their ejection from a Napa Valley Wine Train, speaks at a news conference, Thursday, Oct. 1, 2015, in San Francisco. (AP Photo/Jeff Chiu)

NAPA, Calif. - Eleven book club members kicked off the Napa Valley Wine Train last year in an event widely criticized as racist have settled their lawsuit against the company for an undisclosed amount, according to their attorney.

The members of the Sistahs on the Reading Edge book club who rode the train that day, 10 black women and one white woman, were warned repeatedly during their trip on Aug. 22 that they were too loud and bothering
other passengers. They were eventually escorted off the train mid-ride and taken back to Napa.

The incident drew widespread attention when one of the women, author and entrepreneur Lisa Johnson, documented what was happening on Facebook. The posts were quickly disseminated all over the world, creating significant embarrassment for the wine train, a high-end tour of Napa Valley that serves wine and food.

The women filed an $11 million lawsuit in U.S. District Court in San Francisco in October and today settled it, pending approval from the wine train's board, according to attorney Waukeen McCoy. McCoy said the settlement terms were confidential, but that he was "very satisfied" with the outcome.

The book club had been meeting together for 17 years in and around Antioch and occasionally took weekend trips together.

They went for a day of sipping wine and enjoying the scenery and each other's company but quickly found themselves singled out by staff for being too loud and bothering other guests.

Johnson attributed them raising their voices to the way that they were seated -- in an L shape so that women on the ends had to speak loudly to be heard.

She said in making the reservation, they were assured the wine train could handle a group their size.

She had started out simply documenting the trip on her Facebook page, but soon found herself communicating the details of their removal from the train.

As the story swiftly spread, wine train staff responded on Facebook, accusing the women of "physical abuse towards other guests and staff," but later removed the post and recanted the statement.

The women ranged in age from their mid 30s to an 85-year-old grandmother and included one woman recovering from knee surgery, who had trouble making the walk to the back of the train as they were ejected.

The women said they suffered significant humiliation in the incident and that two of them even lost their jobs as a result of the attention.