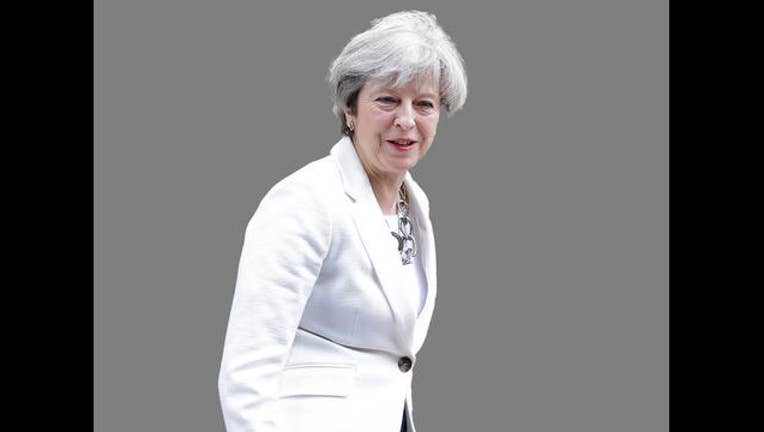 LONDON (AP) -- British Prime Minister Theresa May's gamble in calling an early election appeared Friday to have backfired spectacularly, with a real possibility that her Conservative Party could lose its majority in Parliament.

If confirmed, the result would lead to a period of political uncertainty and could throw Britain's negotiations to leave the European Union -- due to start June 19 -- into disarray. The pound lost more than 2 cents against the dollar within seconds of the announcement.

With more than two-thirds of the seats counted, the results appeared to be generally bearing out an exit poll that predicted the Conservatives would get 314 of the 650 seats in Parliament, down from 330, while the Labour Party was projected to win 266, up from 229. Conducted for a consortium of U.K. broadcasters by interviewing voters leaving polling stations, it is regarded as a directional, but not exact, indicator of the result.

As the results piled up, some form of minority or coalition government appeared increasingly likely. That raised the odds that an election called by May to provide "strong and stable government" would bring instability and the chance of yet another early election.

The results confounded those who said the opposition Labour Party's left-wing leader, Jeremy Corbyn, was electorally toxic. Written off by many pollsters, Labour surged in the final weeks of the campaign. It drew strong support from young people, who appeared to have turned out to vote in bigger-than-expected numbers.

It would also put pressure to resign on May, who called the snap election in the hope of increasing her majority and strengthening Britain's hand in exit talks with the European Union. As she was resoundingly re-elected to her Maidenhead seat in southern England, May looked tense and did not spell out what she planned to do.

"The country needs a period of stability and whatever the results are the Conservative Party will ensure we fulfil our duty in ensuring that stability so that we can all, as one country, go forward together," she said.

Others predicted she would soon be gone

"If the poll is anything like accurate, this is completely catastrophic for the Conservatives and for Theresa May," former Conservative Treasury chief George Osborne said on ITV. "Clearly if she's got a worse result than two years ago and is almost unable to form a government, then she, I doubt, will survive in the long term as Conservative Party leader."

"I don't see how she can be a strong and credible figure now to lead these negotiations," he said.

Corbyn said the result means "politics has changed" and voters have rejected Conservative austerity. Speaking after being re-elected to his London seat, Corbyn said May should "go ... and make way for a government that is truly representative of all the people of this country."

The result was bad news for the Scottish National Party, which by early Friday had lost about 20 of its 54 seats. Among the casualties was Alex Salmond, a former first minister of Scotland and one of the party's highest-profile lawmakers.

A big loss could complicate the SNP's plans to push for a new referendum on Scottish independence as Britain prepares to leave the EU.

May had hoped the election would focus on Brexit, but that never happened, as both the Conservatives and Labour said they would respect voters' wishes and go through with the divorce.

May, who went into the election with a reputation for quiet competence, was criticized for a lackluster campaigning style and for a plan to force elderly people to pay more for their care, a proposal her opponents dubbed the "dementia tax." As the polls suggested a tightening race, pollsters spoke less often of a landslide and raised the possibility that May's majority would be eroded.

Then, attacks that killed 30 people in Manchester and London twice brought the campaign to a halt, sent a wave of anxiety through Britain and forced May to defend the government's record on fighting terrorism. Corbyn accused the Conservatives of undermining Britain's security by cutting the number of police on the streets.

Eight people were killed near London Bridge on Saturday when three men drove a van into pedestrians and then stabbed revelers in an area filled with bars and restaurants. Two weeks earlier, a suicide bomber killed 22 people as they were leaving an Ariana Grande concert in Manchester.

Rachel Sheard, who cast her vote near the site of the London Bridge attack, said the election certainly wasn't about Brexit.

"I don't think that's in the hearts and minds of Londoners at the minute, (not) nearly as much as security is," said Sheard, 22. "It was very scary on Saturday."

That said, security was far from the only issue.

"It's important, but it's only one issue amongst several," said 68-year-old Mike Peacroft. "I wouldn't necessarily say it's at the top. Obviously at my end of the (age) spectrum, I'm more interested in things like pensions and so forth, NHS health care -- plus schooling, those are really my main concerns."