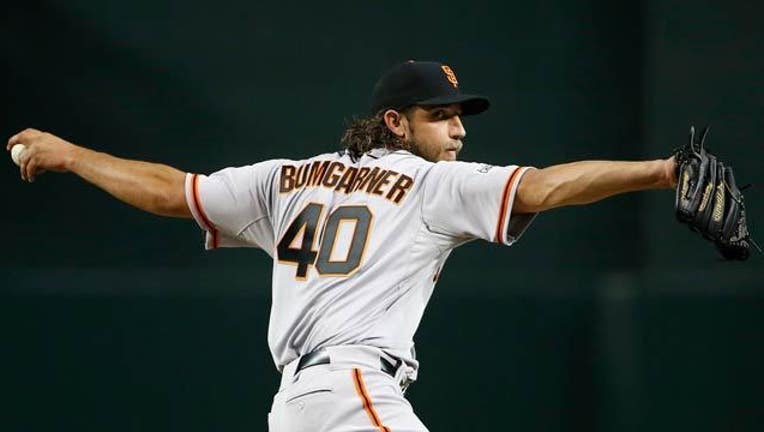 PHOENIX (AP) -- The San Francisco Giants did not exactly have a strong spring.

Individual players struggled at the plate and in the field. The starters floundered at times. Even postseason star Madison Bumgarner had his shaky moments.

Once the regular season started, though, the defending World Series champions looked the part.

Bumgarner pitched seven steady innings and the Giants opened defense of their third title in five years with a 5-4 win over the Arizona Diamondbacks on Monday night.

''It just goes to show you, you can throw spring training stats out,'' Giants manager Bruce Bochy said. ''The bell rung, these guys answered it.''

Bumgarner (1-0) was the NLCS and World Series MVP last year and was sharp to start the 2015 season, allowing a run on six hits.

The offense had an encouraging opener, too, despite losing power-hitting Pablo Sandoval during the offseason and right fielder Hunter Pence to a broken arm that will keep him out early this year.

Sparked by the top of the order - Nori Aoki, Joe Panik and Angel Pagan - San Francisco had 10 hits in four-plus innings against Josh Collmenter (0-1) to build a four-run lead.

Panik had three hits, Pagan had a pair of run-scoring singles and Aoki added two hits. Brandon Crawford chipped in with a two-run double in the fifth.

The Giants nearly blew it, but Jeremy Affeldt got a big out in the eighth inning and Santiago Casilla worked a perfect ninth for the save.

''It's about winning games, that's it, and we were able to find a way to do it,'' Bumgarner said.

The Diamondbacks made it interesting after Bumgarner left.

They loaded the bases against Javier Lopez and Jean Machi in the eighth inning, and pinch-hitter Jake Lamb hit a three-run double off Sergio Romo to cut San Francisco's lead to 5-4. But Affeldt struck out pinch-hitter David Peralta, and Arizona wasn't able to hit anything hard against Casilla.

''They showed a lot of fight,'' Arizona's Chip Hale said after his first game as a big league manager. ''That was great to come back.''

Bumgarner had one of the best postseason runs in major league history last year, earning two wins in the World Series and a five-inning save in Game 7 on two days' rest.

The left-hander wasn't exactly sharp in spring training, going 0-3 with a 3.70 ERA, but said he felt good and would be ready for the start of the season.

Bumgarner left a pitch up in the third inning to Mark Trumbo, who hit a run-scoring triple that nearly went out in the deepest part of the park.

Other than that, Bumgarner had the Diamondbacks under control, aided by double plays in the fifth and sixth.

''I don't know what else we can say about him,'' Bochy said. ''This guy's special; first start goes out there and throws a terrific game.''

Collmenter has been Arizona's jack-of-all trades during his four seasons in the desert, filling in wherever the Diamondbacks needed him, whether it was as a starter or long relief.

The over-the-top-throwing right-hander was rewarded for his workmanlike efforts by getting the ball on opening day.

Aoki, Panik and Pagan greeted him with one hit after another, going a combined 8 for 9 through the first five innings.

Pagan had a pair of run-scoring singles, Buster Posey hit a sacrifice fly and Crawford a two-run double in the fifth to put San Francisco up 5-1.

''For me to be successful I have to throw fastballs where I want them to be,'' Collmenter said. ''I was throwing them all over the place. I got behind in some counts I threw some pitches that they could put the bat on and they did that sometimes.''

Giants: Pence, who could be out a few more weeks with a broken forearm, had played 383 straight games - the longest active streak in the majors.

Diamondbacks: Arizona opened the season with two starting pitchers on the DL: Patrick Corbin and Bronson Arroyo, who are both recovering from Tommy John surgery last season.

Giants: Right-hander Ryan Vogelsong was moved up to start Tuesday night against the Diamondbacks in place of Jake Peavy, who struggled with a ''dead arm'' in his final three spring starts. Peavy is expected to be back in the rotation for the next series against San Diego later this week.

Diamondbacks: Right-hander Rubby De La Rosa will make his Arizona debut against the Giants after the Diamondbacks acquired him in an offseason trade that sent left-hander Wade Miley to Boston. De La Rosa was 4-8 with a 4.43 ERA in 18 starts with the Red Sox in 2014.