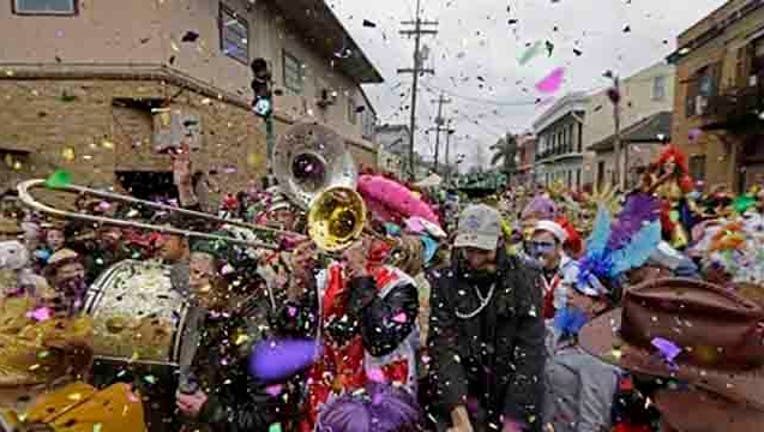 NEW ORLEANS (AP) — If there was a theme for this year's Mardi Gras costumes in New Orleans, it was 'Brrrrr.'

With temperatures near freezing, almost everyone was bundled up. Some costumes were no more than a fake-fur hat topped with animal ears.

The crowd was thick along St. Charles Avenue, where the route of Zulu, the day's first big parade, merged with that of Rex, one of the most elaborate. Rex was followed by two long "truck parades" — floats built up from flatbed trailers and decorated by costumed riders.

A 23-year-old man and a 24-year-old woman fell from different floats in a truck parade Tuesday in suburban Metairie, the Jefferson Parish Sheriff's Office said. The man was in stable condition and the woman was expected to be treated and released, said Col. John Fortunato, spokesman for the sheriff.

As Zulu passed, Ashley English said she was too cold to show off her costume.

"I have a corset on. You just can't see it," she said, pulling at the neck of her leather jacket. The corset was purple, she said, to go with her green and gold leggings.

Purple, green and gold were introduced as the colors of Mardi Gras in 1872, when a group of businessmen first crowned one of their own "Rex, king of Carnival."

English's friend, Jon Farkas, wore a hat fashioned like a white, big-billed bird, its long, yellow legs dangling in front of his shoulders. "It's supposed to be a pelican," he said.

Because of the cold weather, tutus were worn over jeans and many costumes, such as clowns or animals, were baggy enough to cover sweat shirts.

"My angel wings have tequila in them," she said, showing the mouthpiece of a hydration backpack covered by the wings. She said she lost her halo Sunday.

Just down a side street, a man was collecting admission outside a plywood cubicle labeled "BATHROOM." He and others at an RV repair shop had made a portable toilet of plywood, plastic buckets, and frequently changed plastic bags, which went into a nearby trash bin. It was $2 for men, $3 for women — or $10 and $12 for an all-day pass.

On Lee Circle, Wayne Encalarde sat in a pickup truck with a commercial portable toilet tied down in the bed. A big orange parking ticket was stuck behind one windshield wiper.

He said he parks there and is ticketed every Mardi Gras.

"It's worth it to have a bathroom for the kids," he said.

Partway down Zulu's route along Jackson Avenue, contractor Mike Cochran and several younger men were giving away gumbo from the parking lot of a building under renovation.

"Our main purpose — other than feeding the multitudes — is making sure nobody climbs the scaffold," he said.