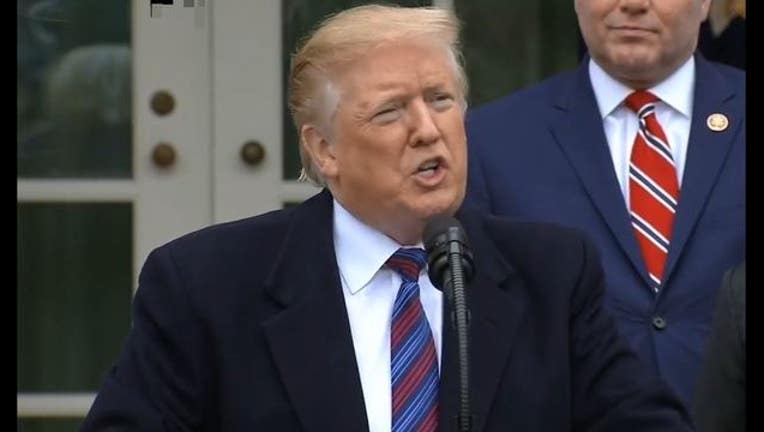 WASHINGTON (KTVU) - In a hastily called press conference in the Rose Garden on Friday intended to update the public about his meeting with Congressional leadership, President Donald Trump spent a lot of time talking about immigration, the border wall and specifically pointing fingers at the Left Coast.

In an off-script speech, Trump said: "San Diego and areas of California, we just finished brand new walls. Beautiful walls. Steel walls. And they wanted them badly. They were asking us - that's why we did it there. I said, 'Let's not go to California.' California always complains through their great governors. They're always complaining. I said, 'Let's not do it.' Let's let the governor ask us. But we did it anyway because they really needed it. They were having tremendous problems. So we built a brand new wall in San Diego and it's working really well. You should go and look at it. It's amazing. It's incredible how well it works. But these coyotes and these human traffickers - they make a right turn before they get to the port of entry. They go as far as the wall is, or as far as the barricade is., and then they make a left. Welcome to the United States. And what they do with usually the women - sometimes children - that they are trafficking with an end you don't want to know about."

Trump said the only way "you're going to stop this" is to put up solid steel or a concrete structure.

It wasn't crystal clear what Trump meant when he said that "California always complains," but the Golden State has become a flashpoint in the debate over his immigration policies, including his proposal to build a wall. State Attorney General Xavier Becerra has sued the administration multiple times challenging its immigration policies.

The wall proposal overcame a legal hurdle in March when a federal judge in San Diego gave the government the go-ahead to build along the border, despite complaints from the state and environmental advocates including the Center for Biological Diversity in Oakland, The Sierra Club, Defenders of Wildlife and Animal Legal Defense Fund. The groups sued last September, arguing the Trump administration didn’t have the legal authority to bypass environmental and other regulations to build the barrier.

California Gov. Gavin Newsom did not immediately address Trump's claims. But late last month, he tweeted that it's important to have an open crossing between the United States in Mexico, saying that $558 billion worth of goods flow across America's southern border, the one Trump has been threatening to shut down.

And in an interview with Politico in November, San Diego's Mayor Kevin Faulconer, a Republican, agreed that keeping the San Ysidro port of entry open is key economically for his city and Tijuana, Mexico. "Closures, even for a short time, can have significant impacts on residents and businesses," he said.

AP FACT CHECK: On Wednesday, the Associated Press conducted a fact check of some of Trump's claims about the wall. Some of these matters were also discuss Friday during the White House news conference.

TRUMP: On the number of immigrants living in the U.S. illegally: "I used to hear 11 million all the time. It would always stay right at 11. I said, 'Does it ever increase or go down?' 'No, it's 11.' Nobody knows. It's probably 30, 35 million people. They would flow in, mostly from the southern border, they'd come in and nobody would talk about it, nobody would do anything about it." - Cabinet meeting.

THE FACTS: It's nowhere close to 30 million to 35 million, according to his own Homeland Security secretary as well as independent estimates.

The nonpartisan Pew Research Center estimates there were 10.7 million immigrants in the U.S. illegally in 2016, the most recent data available. Advocacy groups on both sides of the immigration issue have similar estimates.

According to Pew, the number of immigrants in the U.S. illegally had reached a height of 12.2 million in 2007, representing about 4 percent of the U.S. population, before declining in part because of a weakening U.S. economy.

THE FACTS: This does happen, though it's not as common as Trump suggests by talking about it so often.

He is referring to adults who come with children they falsely claim to be theirs, so that they won't be detained under a no-child-separation policy.

But such cases of fraud are rare. According to the Homeland Security Department, about 500 immigrants were found to be not a "legitimate family unit" and thus separated upon detention from April 19 to Sept. 30 of last year. That's a small fraction of the 107,000 families apprehended in the last budget year, which ended Sept. 30.

TRUMP: "Mexico is paying for the Wall through the new USMCA Trade Deal. Much of the Wall has already been fully renovated or built. We have done a lot of work. $5.6 Billion Dollars that House has approved is very little in comparison to the benefits of National Security. Quick payback!" - tweet.

THE FACTS: Mexico isn't paying. It's also not true that there's been much construction beyond fencing erected during previous administrations; some renovation of the existing barrier has been achieved.

Trump is arguing, in essence, that the updated trade pact with Mexico and Canada, known as the U.S.-Mexico-Canada Trade Agreement, will yield economic benefits to the U.S. that, years from now, will cover the unrelated costs of the wall today. That assertion doesn't hold water even with those who support his push for a wall. He went further at a Cabinet meeting Wednesday, contending the wall will pay for itself on a "monthly basis."

The new trade deal won't change that much from the previous North American Free Trade Agreement. The three countries would continue trading in an environment of mainly low or no tariffs, with certain improvements for all three partners from the terms of NAFTA. Moreover, the new deal isn't in effect. It's awaiting ratification from legislative bodies in each country, and that is not assured.

There is no credible way for Trump to forecast additional growth covering costs that are being charged to U.S. taxpayers if the wall is built. Trade balances depend on too many factors - consumer tastes, exchange rates, overall economic performance and the choices of thousands of companies, for example - and some are well outside any government's control. Trump specifically promised in his 2016 campaign that Mexico would pay for the wall. It is not doing so.

Trump's case is also built on a mischaracterization of trade balances. Unlike economists and governments, he considers a trade deficit to be a payment to the exporting country. By that argument, if a trade deficit shrinks, the U.S. is saving money. But that's not how trade works. Consumers create a trade deficit by buying products made abroad. They get value for their purchase - the products - and are not giving money away.

Trump's claim that much of the "Wall has already been fully renovated or built" is only supported when counting work done by past administrations and ignoring the fact that fences are not the towering walls he promised. The 2006 Secure Fence Act has resulted in about 650 miles (1,050 kilometers) of border barrier. Money approved by Congress in March 2018 is to pay for 84 miles (135 km), but that work is not done.

Trump's point that the national security benefits would outweigh the economic cost is a legitimate one to debate. But the notion that U.S. taxpayers would not be covering the cost is baseless.