SACRAMENTO, Calif. - The state auditor issued a scathing report on Thursday, saying that the Employment Development Department has sent out at least 38 million pieces of mail with people's Social Security numbers on them, which puts Californians at heightened risk of identity theft.

State Auditor Elaine Howle wrote to the governor and the Legislature urging the agency to stop this practice: "EDD must take swift action to end its potentially harmful practice and better safeguard the identities of the residents it serves."

But as of yet, she said the agency has not yet removed the numbers from the most commonly mailed forms. The recent surge in unemployment claims as people are out of work during coronavirus, Howle said, "has further revealed the dangers of EDD's practices."

In fact, even though the state auditor’s office told the EDD to stop doing this a year ago, the auditing team found that during their current inspection, at least 38 million mailings still had people’s Social Security numbers on the front of the documents. Howle said she believes the number could be even higher than that. 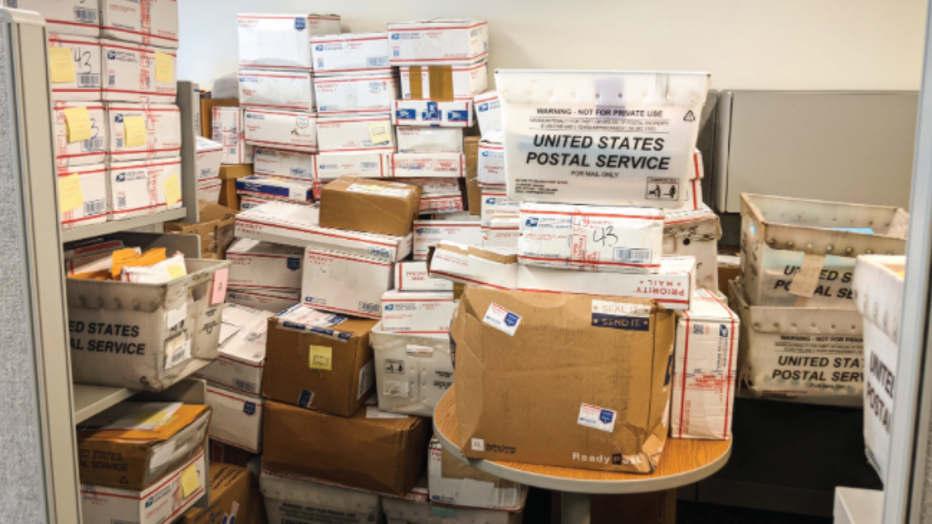 The California state auditor says she found at least 38 million pieces of mail sent out by the EDD that has Social Security numbers on them. Photo: State Auditor

The EDD media office confirmed it received a request for comment, but didn't immediately respond to the criticism.

Lawmakers on both sides of the aisles were quick to chime in with criticism.

"This is maddening," State Assemblyman David Chiu (D-San Francisco) said. "It is yet just another example of EDD's failures. They completely know this was a problem. This has been brought to their attention repeatedly. In fact, there was a bill signed this year on that topic. A decade ago, the legislature gave EDD a quarter billion dollars to upgrade its system and has yet to do so."

Assemblyman Jim Patterson (R-Fresno) said "the governor and the Attorney General, they have got to step up."

Over the last eight months, people have reported receiving mail from EDD that is not addressed to them. For example, one person who had recently moved into a new home reported receiving more than 65 pieces of mail from EDD addressed to at least 15 different people. "Such mailings may be linked to attempts to fraudulently collect unemployment benefits," the audit found.

As one local example, San Francisco school bus driver Michelle Panganiban told KTVU in September that she was shocked to find nearly one hundred letters from the EDD sent to her address. All the letters were addressed to names she didn't recognize. She says the return addresses were from various EDD offices throughout the state and some even felt like they had EDD debit cards inside.

"I'm sure they have a machine that is printing and stuffing, but there's nothing in their system that says hey, 100 are going to one lady? That doesn't make any sense," said Panganiban, who added that she worries if the people listed on the letters are real and waiting for checks to come in the mail.

And 20-year-old Sebastian Alvarez of San Diego said he fell victim to identity theft when it turned out his Social Security number had been stolen. He's not sure how his number was made public, but he did discover the problem when he began applying for unemployment.

This fall, he couldn’t access any funds, because it turned out a Milpitas woman had bought his SSN and was using his identity to collect benefits.

Alvarez said that he reported the situation to the EDD multiple times.

"It's a little frustrating, because I call and I call, and I tell them the same thing a thousand times," he said. "And they've even said, ‘Okay, an investigator is going to call you.’ And an investigator never calls me."

During last year’s audit, EDD told the state auditor that it was working on a way to fix the problem, but modernizing their system would take more than five years to complete.

Howle said her team offered some alternative suggestions in the meantime, including replacing full SSNs with a modified unique identifier. But, according to the state auditor, the EDD updated only two of the 10 forms, neither of which were high priority.

"By contrast, had EDD modified the three highest-volume documents as we recommended, it would have avoided sending full SSNs on nearly 34 million—or close to 90 percent—of the 38 million mailings it sent from March 2020 through mid-October 2020," the audit found.

EDD mails millions of documents each year as part of administering the unemployment benefit and disability insurance benefit programs, and many of these documents contain people’s’ full SSNs.

Howle added that she is also going to conduct an emergency audit of EDD's response to the COVID-19 pandemic, including its backlog of unemployment claims, its call center performance, and the adequacy of its IT infrastructure, that she hopes to release early next year.

This story was reported from Oakland, Calif. KTVU's Tom Vacar contributed to this report. Lisa Fernandez is a reporter for KTVU. Email Lisa at lisa.fernandez@foxtv.com or call her at 510-874-0139. Or follow her on Twitter @ljfernandez.