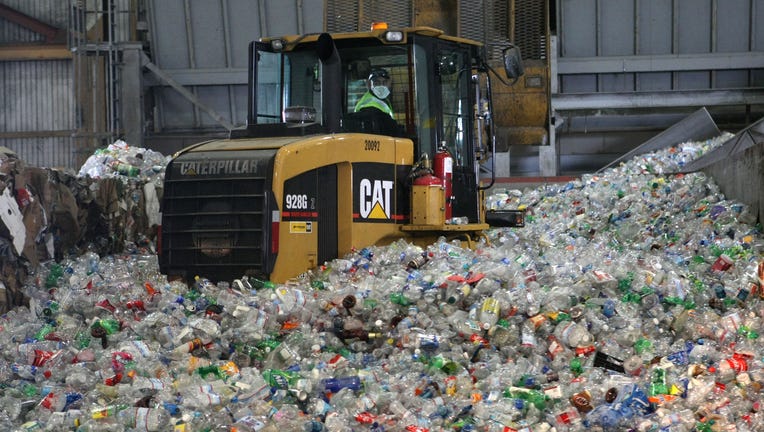 SACRAMENTO, Calif. - California lawmakers have approved what advocacy groups say are the nation's strongest protections against falsely labeling items as recyclable when they in fact are destined for landfills.

The measure sent late Thursday to Democratic Gov. Gavin Newsom for his consideration would reserve the "chasing arrows" recycling symbol for items that actually can be recycled.

The author of the bill named SB 343, Democratic Sen. Ben Allen, said in a statement that it will force truth in advertising and "will reduce contamination in the recycling stream and improve the sorting process, thereby saving cities and ratepayers money while empowering consumers to make more informed decisions."

It's among efforts in several states to ease confusion about recycling and increase recycling efforts. A Consumer Brands Association report recently asserted that the confusion has led to "a broken recycling system in America."

A coalition of 14 opposition organizations countered that the bill would have "resounding impacts" on the state's goal to divert 75% of trash from landfills and hinder the state's efforts to recycle packaging.

The bill would likely require state regulators to create a list of eligible items that "is extremely limiting," potentially including just 15, the groups said — eight types of paper materials, two forms of glass, two types of metals, two types of plastics and one type of colored plastic.

Those limits "will cause more materials to go to landfill," the opposing groups said.

The bill gives the state Department of Resources Recycling and Recovery, known as Cal Recycle, until January 1, 2024, to publish a study on what is recyclable and exempts products and packaging that is manufactured up to 18 months after the study is published.

"Consumers want to recycle correctly, which is why they dutifully look at labels and place everything with a chasing arrows symbol into the recycling bin — even products that will just get sorted back out and disposed into a landfill," National Stewardship Action Council executive director Heidi Sanborn said in a statement.

Californians Against Waste advocacy director Nick Lapis said that manufacturers "have been able to lie to consumers for far too long, and this bill will finally hold them accountable for actually making their products recyclable."

The groups cited a report this year by California's Statewide Commission on Recycling Markets and Curbside Recycling that said consumers assume that the chasing arrows symbol means that items should go into curbside recycling bins. The commission said the symbol should "be reserved for materials which are accepted in curbside bins and do not cause contamination."

Senators sent the bill to Newsom on a 29-7 vote, after it was advanced by the Assembly, 50-3. Newsom has not indicated whether he will sign it.

They also sent the governor a related bill by Democratic Assemblyman Phil Ting that would tighten rules for what can be used in compost to prevent contamination of the soil. Cal Recycle would adopt labeling rules so consumers can tell what can be composted.

Companies currently label some items as useable for compost "even when they contain harmful chemicals that contaminate our compost, consequently making that compost unusable," Ting said.