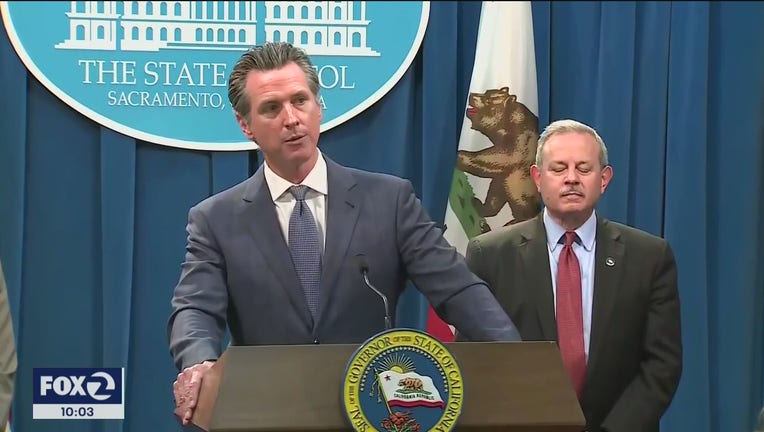 Gov. Newsom declares a state of emergency after the 1st coronavirus death in California.

SACRAMENTO, Calif. - California Gov. Gavin Newsom urged an end to gatherings of more than 250 people to counter the spread of new coronavirus, a move he said would cause “real stress” for many people and businesses but save lives.

Newsom said California public health officials late Wednesday issued an updated policy saying “non-essential” gatherings such as sporting events, concerts and conferences should be postponed or canceled until at least the end of March.

Smaller events can proceed only if organizers can keep people at least six feet apart to avoid transmission of the virus. The policy does not apply to school classes. Gatherings that include those at higher risk for severe illness should be limited to no more than 10 people no closer than six feet apart.

“Not holding that concert or community event can have cascading effects — saving dozens of lives and preserving critical health care resources that your family may need a month from now,” Newsom said in a statement. “The people in our lives who are most at risk – seniors and those with underlying health conditions -- are depending on all of us to make the right choice.”

The policy defines a “gathering” as anything that brings together people in a single space including auditoriums, stadiums, large conference rooms, meeting halls and cafeterias.

Last week, Newsom declared a statewide emergency because of the virus. His announcement on gatherings is a recommendation and not a ban like the one Washington Gov. Jay Inslee imposed on all gatherings of 250 or more in Seattle’s metro area. That order affects three counties with nearly 4 million people. At least 25 people have died in Washington, most at a single suburban Seattle nursing home.

There are more than 175 confirmed coronavirus cases in California and four virus-related deaths, including the first one in Los Angeles County on Wednesday. Officials in Sacramento County are taking steps to protect residents of an assisted living facility after a resident in her 90s died on Tuesday.

Newsom said eliminating larger gatherings “will cause real stress — especially for families and businesses least equipped financially to deal with them.” He said the state is working with businesses “who will feel the economic shock of these changes.”

Los Angeles Mayor Eric Garcetti said restricting large gatherings will be a headache and a potential financial hit for the city and the state, but it’s the right thing to do to stem the spread of the virus.

Trump suspends travel between US and Europe