The first federal lawsuit linked to the 126,000 gallons of oil that spilled into the ocean off Huntington Beach is a proposed class-action suit that includes claims to recover damages for individuals and businesses damaged by the massive leak.

HUNTINGTON BEACH, Calif. - As the U.S. Coast Guard investigates more than 126,000 gallons of oil spilled five miles off the coast of Huntington Beach, the first federal lawsuit linked to the disaster was filed late Monday to recover damages for individuals and businesses damaged by the massive leak.

Authorities are continuing their search for answers on what caused the massive Huntington Beach oil spill. 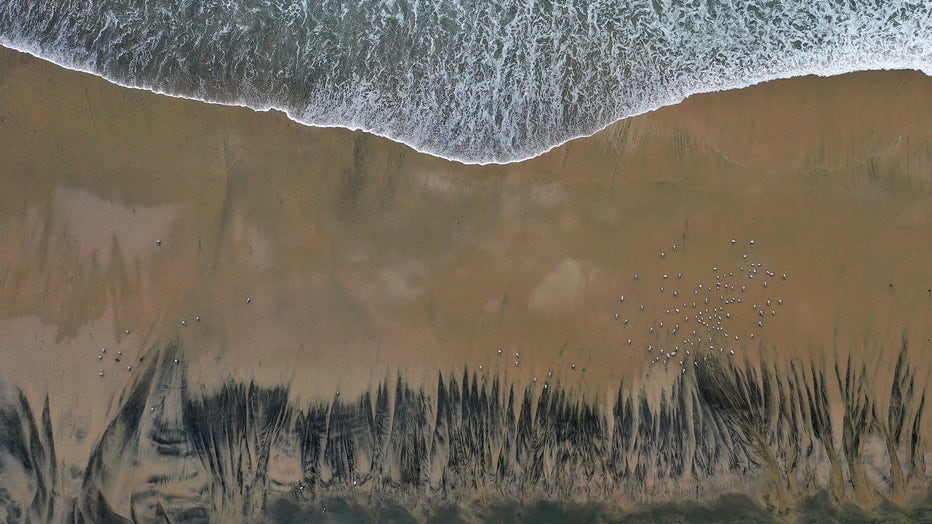 In an aerial view, shorebirds feed amid oil contaminating Huntington State Beach after a 126,000-gallon oil spill from an offshore oil platform on October 4, 2021 in Huntington Beach, California. The spill forced the closure of the popular Great Paci

The lawsuit was brought on behalf of Peter Moses Gutierrez Jr., who owns a disc jockey company that regularly performs along Huntington Beach. He alleges in the complaint that he is losing and will continue to lose a substantial amount of his DJ business due to the closure of the beach and other consequences of the spill.

Gutierrez also alleges he has been, or will be, exposed to toxic oil contaminants.

"After years fighting for business owners and residents devastated by the BP oil spill in the Gulf Coast and other oil spill victims around the country, we understand the terrible impact these events have on the environment, wildlife, and people," said the plaintiff's attorney Alex R. Straus.

"Today it is reported that 120,000 gallons of crude oil spilled from an offshore rig. But those numbers may increase as the investigation and clean- up efforts continue. The impacts on businesses, homeowners and their families are likely to be felt for years."

Crews are working around the clock to clean up the massive oil spill in Huntington Beach.

An oil slick plume measuring six nautical miles -- and spreading -- has caused significant harm. Shortly after the spill was discovered, beaches were closed, dead birds and fish were found washed up on shore, nearby wetlands were inundated with oil, and beachgoers reported feeling sick. Southern California officials fear "irreversible" damage. Oil spill contamination can persist for a decade or more.

"This is the latest tragedy of the oil industry, but it certainly won't be the last," said attorney Greg Coleman, who also helped file the suit.

"Our attorneys are already working with the Huntington Beach community and surrounding communities to protect their legal rights. These innocent victims deserve justice. With this lawsuit we hope to help them clean up their beaches and force the fossil fuel industry to clean up its act."

The U.S. Coast Guard received the first report of a possible oil spill off the Southern California coast more than 12 hours before a company reported the major leak in its pipeline and a cleanup effort was launched, records show.

Huntington Beach Mayor Kim Carr said the city's famous beaches could remain closed for weeks or even months, leaving residents and business owners facing an ecological and economic disaster. The spill prompted cancellation of the final day of the Pacific Airshow on Sunday, which drew hundreds of thousands of people to the shore on Saturday.

About 3,150 gallons of oil has been recovered from the water and 5,360 feet of boom has been deployed in an attempt to control the spread of the oil.

Justice Department officials and federal investigators are "investigating to determine if any criminal liability exists as it relates to the oil spill," said Thom Mrozek, a spokesman for the U.S. Attorney's Office.