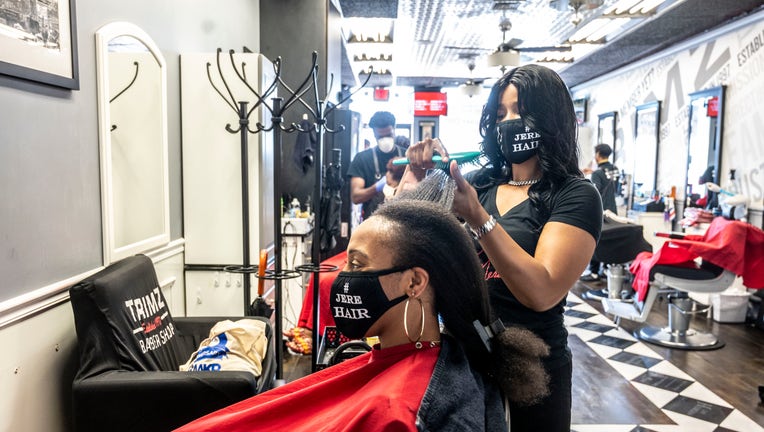 During the pandemic, Corinne Lam and her stylist husband saw the income from their San Diego hair salon slashed by two-thirds while they struggled with unpaid medical bills and an uncertain future.

Now, the 36-year-old said her phone is ringing off the hook and messages are popping up on social media asking for appointments as she prepares to reopen her doors. California Gov. Gavin Newsom said Friday hair salons can resume operations, and she's already booked out at least three weeks.

“Every time we're on the phone, we're getting numerous calls coming in. My email is inundated,” Lam said.

Salotto Salon is one of countless California businesses walloped by the whiplash of closings and reopenings and seemingly ever-changing guidance and rules about how to keep workers and customers safe from the coronavirus.

As the state's coronavirus infections rose, and fell, then soared and declined, Newsom has taken measures to limit what businesses like salons could do. In March, the state shuttered many businesses to brace for the onslaught of the virus, then allowed for reopenings as cases seemed to wane. Many businesses were told they had to close indoor operations in July as infections climbed higher.

On Friday, Newsom unveiled a new process for business reopenings that he said will move much more slowly in an attempt to prevent another spike in coronavirus cases. Hair salons, however, will be allowed to reopen with modifications in all counties, regardless of infection rates and virus transmission.

Earlier in the year, business was booming at Lam’s then-six-station salon, where she and her husband regularly worked 10- or 12-hour days and split schedules and day care responsibilities for their sons, ages 2 and 3.

As the virus crept into a nearby community, Lam said she shut her doors, even before they were ordered to do so. They figured they’d be back in two weeks, and spent the time with their kids at home.

But Newsom grouped salons with other businesses deemed to be higher risk, and Lam started to realize she could face a much longer wait. She worried about her 90-year-old client with head sores and a stylist friend with mental health issues who poured himself into his work to keep going.

Lam said she couldn’t see why stylists who undergo state-mandated training in sanitation couldn’t reopen even when some other businesses could. Her 10 employees — seven stylists and three assistants — were able to collect unemployment, but she didn’t know how long that would last. She could delay her mortgage payments, but personal medical bills from a surgery earlier in the year began to mount.

In May, Newsom allowed some salons to reopen. Lam and her husband scrambled to get ready, training staff to take customers' temperatures and change disposable aprons after each cut. They worked long hours to catch up on the pent-up demand until July, when they were shut down again as infections soared.

“I did not see the second closure coming. It took the wind out of my sails completely," she said.

After some back and forth with state regulators, Lam eventually took some operations outside. They weren't allowed to wash hair, so they were limited to cuts, which is a tiny portion of the business, she said.

But it kept her staff working and the money coming in, so they opened two days a week in the mornings until the weather got too hot.

“We're swapping sweat. Clients are so apologetic — I'm like, ‘I can't tell if it's yours or mine,'” she said.

This week, Lam packed up her outdoor set-up and planned to move back inside the salon. San Diego County had been removed from the state's coronavirus monitoring list, and she said she and her husband decided they had to go inside — permission or not — because it's cleaner and safer.

They have fewer stations than before. Lam said she's leaving a tent up so customers can sit outside while waiting, but styling will occur indoors.

“If we weren’t already doing the legwork to open this weekend, it would be a big scramble,” she said.