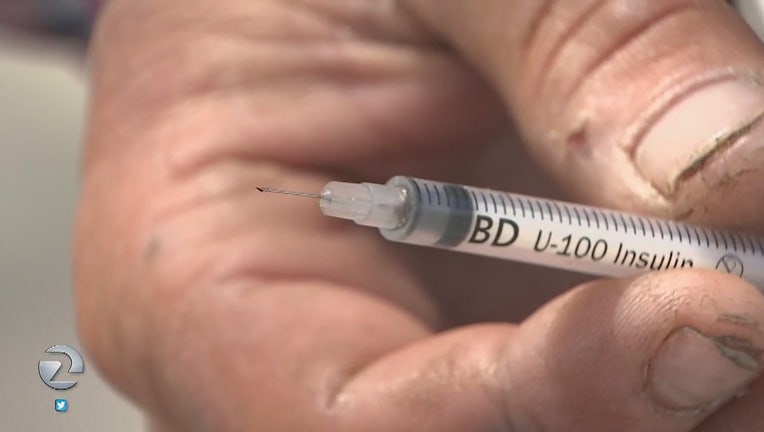 SACRAMENTO, Calif. - Instead of putting opioid-users in jail, a proposal moving through the California Legislature would give them a place to inject drugs while trained staff watch them to make sure they don’t die from accidental overdoses.

The state Senate passed a bill on Thursday by just one vote that would allow the programs in Oakland, San Francisco and Los Angeles County. But the bill must still pass the state Assembly before it can go to Democratic Gov. Gavin Newsom, who would decide whether to sign it into law.

Supervised injection sites have emerged around the world in recent years, part of a movement to rethink treatment for people addicted to powerful opioids — including heroin, fentanyl and some prescription pain killers.

People get very sick when they try to stop taking the drugs, making it hard to stop using them. Overdose deaths have surged nationwide in recent years, prompting debates in state Legislatures about how best to tackle a problem that is rooted in public health and public safety.

These sites are legal in Canada, but illegal in the U.S. The former Trump administration sued to block a proposed injection site in Philadelphia and a federal appeals court sided with the government in January. But supporters are appealing that decision, hoping President Joe Biden’s administration might drop the lawsuit.

"Unlike the Trump administration, President Biden takes a science-based approach to addiction," said state Sen. Scott Wiener, a Democrat from San Francisco who authored the California legislation. "We hope the administration will allow states to pilot evidence-based strategies like safe consumption sites."

In California, 45% of drug overdose deaths involved opioids in 2018, resulting in more than 2,400 deaths, according to the National Institute on Drug Abuse.

Prescription pain killers accounted for about half of the deaths. But the biggest increases in deaths have come from heroin overdoses, which more than doubled between 2012 and 2018. Overdose deaths involving fentanyl, a synthetic opioid, increased more than 800% during the same period.

"Forcing people to use drugs on our streets doesn’t make anyone safer," Wiener said. "Let’s, instead, take a public health approach to drug use, with trained professionals who can provide clean supplies, overdose prevention medication, and access to drug treatment programs."

All Republicans in the state Senate voted against the bill, along with two Democrats. The Senate Republican Caucus said in a statement that the bill would "establish taxpayer-staffed and funded drug dens."

"This is like giving a person struggling with alcoholism a gift card to BevMo," state Senate Republican Leader Scott Wilk said. "There is zero consideration for the neighborhoods in which these sites will operate, the victims of crimes resulting from addicts roaming the streets, or the families of individuals struggling with addiction who are praying their loved one gets treatment rather than drugs."

The California bill would require workers at the so-called "safe injection sites" to try to help these people by getting them into drug treatment programs or referring them to mental health care, social services programs and primary medical care.

Now that Brown is out of office, supporters are trying again this year — hoping that Newsom will be more receptive.

By passing the bill, "the Senate has made it abundantly clear they are committed to doing whatever it takes to save lives," said Jeannette Zanipatin, California state director for the Drug Policy Alliance, a group that advocates for drug policy changes.