ORANGE COUNTY, Calif. - A California school district is investigating a teacher after she posted a video admitting that she encouraged her students to pledge allegiance to a gay pride flag after she removed the American flag from her classroom.

"Okay, so during third period, we have announcements and they do the pledge of allegiance," the teacher, identified as Kristin Pitzen of Newport Mesa School District in Orange County, said in a video posted to social media. "I always tell my class, stand if you feel like it, don’t stand if you feel like it, say the words if you want, you don’t have to say the words."

"So, my class decided to stand but not say the words. Totally fine," she continued in the now-viral video.

"Except for the fact that my room does not have a flag," she said, explaining that she removed the flag during the pandemic and then whispered to the camera, "because it made me uncomfortable."

She went on to say that one of her students asked where they should look during the pledge of allegiance since there is no American flag in the classroom.

"In the meantime, I tell this kid, ‘We do have a flag in the class that you can pledge your allegiance to. And he like, looks around and goes, ‘Oh, that one?'" and points to the pride flag. 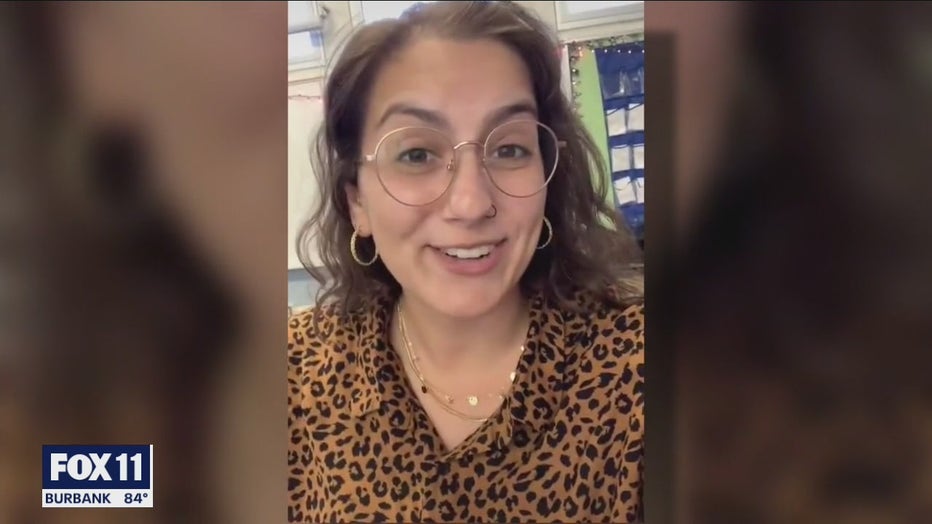 The Newport Mesa School District said the incident is under investigation, but could not provide more details as it does not "discuss employee related matters."

The school district released the following statement, "We are aware of this incident and are investigating. While we do not discuss employee related matters, we can tell you that showing respect and honor for our nation’s flag is a value that we instill in our students and an expectation of our employees. We take matters like this seriously and will be taking action to address it."

The district released an updated statement Monday, stating that the teacher is no longer in the classroom.

"We follow due process and our investigation continues," the statement continued.

The video has meanwhile garnered backlash on social media, including from former acting director of national intelligence Ric Grenell.

"What kind of parent would allow their child to be taught by this wacko? Why are parents turning their kids over to someone they don’t know? I’d like to talk to people who think this is good?!?" Grenell wrote on Twitter, accompanied by the video.