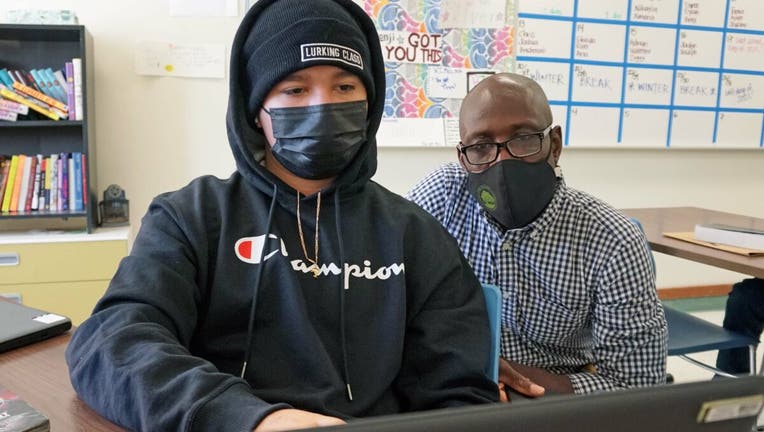 Oakland teacher Michael Obah, right, works with a student on a science assignment. Obah credits his district's teacher pipeline program for encouraging him to get his teaching credential. Credit: Andrew Reed/EdSource

OAKLAND, Calif. - A growing body of research shows that Black students who have at least one Black teacher growing up are more likely to graduate high school and enroll in college than those who don't.

Experts attribute the lack of Black K-12 teachers in California to a number of barriers, including underrepresentation in teacher credentialing programs, as well as workplace discrimination that prompts some to leave the profession.

As America attempts to reckon with racial injustice, some California school districts are adopting teacher pipeline programs specifically targeting potential Black teachers while also making efforts to retain teachers and listen to what might turn them away.

California Department of Education data shows that in the 2018-19 school year, the most recent year available, only 3.9 percent of public school teachers in the state -- around 12,000 -- were Black, according to Ed-Data.

Return to a calling

Michael Obah, a biology teacher at Oakland's MetWest High School, said the lack of Black teachers in California is what inspired him to return to his "calling," leaving behind a well-paid corporate accounting job in San Francisco.

Obah was a high school teacher for five years in his home country of Ghana before immigrating to the United States in 2001.

"The amount of money I was making wasn't what was giving me happiness," Obah said. "I would read the news and see minorities struggling, people who look like me not being able to get jobs, homes, and going through a lot of struggle to be able to achieve in school."

Obah said he was able to pursue the career change because of Oakland Unified's Grow Our Own programs.

The teacher residency program pays student teachers a $15,000 stipend while they earn their credentials and apprentice under a mentor. In addition to the stipend, Obah said he's also received emotional support, job-site support, help with test preparation and interviews, and links with Oakland schools for jobs.

California Department of Education data shows that in the 2018-19 school year, the most recent year available, only 3.9 percent of public school teachers in the state -- around 12,000 -- were Black, according to Ed-Data.

UC Berkeley Graduate School of Education associate professor Travis Bristol, who chairs the state Department of Education's Educator Diversity Advisory Group, said the cost of teacher preparation programs is one of the major barriers impeding the pipeline of Black teachers.

The funding of residency programs indicates "some real focus" by the state on trying to remove that barrier, Bristol said.   Bristol said revenue surpluses in recent years and additional federal funding through the American Rescue Plan have put the state in a good financial position to invest in such programs.

The state is also in a good political position for such efforts.

"There is a policy moment to really move the needle on teacher diversity here in the state," Bristol said.   Oakland Unified's "pipeline" programs are working to attract, grow, develop and retain Black educators in the city, said Sarah Glasband, the district's director of talent development, recruitment and retention. Pipelines are programs aimed at providing underrepresented groups the resources they need to enter specific professions.

Some of Oakland Unified's programs are aimed at substitute teachers and other district employees who want to become teachers.

During 2020-21, Black students made up 22.1 percent of Oakland Unified's enrollment, and Black teachers made up 19.9 percent of the district's teachers.

A long way to go   Obah, the biology teacher, said he saw the underrepresentation of Black teachers firsthand early in the credentialing process.

A December 2020 analysis by TNTP (formerly The New Teacher Project) found that almost every state had higher percentages of teacher enrollees who identified as white when compared with white public school students.

Nationally, enrollees at teacher preparation programs were nearly two-thirds white while public school students were 47 percent white.   Jacob Guthrie, who heads teacher recruitment, selection and retention for Los Angeles Unified's Black Student Achievement Plan, said the underrepresentation of people of color - especially men of color - in higher education prompted the district to create its own in-house credentialing program, which is approved by the state's Commission on Teacher Credentialing.

The program has allowed substitute teachers, paraprofessionals, administrative assistants and even bus drivers to become credentialed teachers while earning a salary and benefits at their original jobs, Guthrie said.

Obah said he shares a special connection with Black students.

"I feel like they relate to me, and I relate to them," he said. "They're curious about Africa, our ancestry alone is a strong bond, and I think they see me in them, and they're able to approach me more."

He's had Black students who say they participate more in his class than other classes.

One day, Obah said, one student came to him in tears, saying he had suicidal thoughts and felt he "wasn't proficient, wasn't worthy." Obah said he "seized the opportunity" and assured the student that there was nothing wrong with him -- that it was up to teachers to present the class contents in a way that he can learn in a stress-free environment.

"I know for sure he bypassed other teachers and didn't break down, but with me, he was vulnerable," Obah said. "He talked to me, and I talked to him and was able to transfer him to a school psychologist who could help. For me, that was a powerful moment, a connection because he was a Black student, and I am a Black teacher."     The toll on Black teachers

Harris said that on multiple occasions he felt his concerns weren't taken seriously and that he was treated unfairly because of his race. He said a series of incidents led him to file a discrimination complaint with the school's human resources department.

One issue was that he was the only teacher in his department who had to constantly move between classrooms, which Harris - who has been teaching for more than a decade - said is typically reserved for rookie teachers.

Adam Clark, superintendent of Mt. Diablo Unified School District -- which encompasses College Park High -- said via email that he and the district's governing board are "committed to ensuring that all students, families and staff members feel safe and welcomed."

MORE:  Stressed-out parents divided over sending kids back to school amid omicron

"We take reports of discrimination seriously and follow board policies in all investigations," Clark said.

If school administrators want to retain Black teachers, Harris said, they need to get serious about providing mental health support. And they need to understand the microaggressions they endure on a regular basis.

"They don't realize the mental toll it takes on a Black educator, day in and day out, in a primarily white institution," Harris said.

One of LA Unified's focuses in retaining Black teachers is addressing what's known as the "invisible tax" on Black male teachers, a concept former U.S. Education Secretary John King wrote about in the Washington Post in 2016.

The invisible tax describes how Black teachers are subjected to stereotypes by non-Black co-workers, such as being assigned to handle disciplinary issues with Black students, or the assumption they want to be involved in athletics.

The district is offering professional development opportunities to principals to address this issue at their campuses and is holding focus groups for teachers to talk about their experiences and share suggestions with district administrators.

Harris said he's committed to staying at the school in part because of his work with the school's Black student union.

He leads the student club, which is composed of about 60 students of different races. Harris keeps his classroom open during lunch for the club, plays music and allows students to filter in and out.

Some Black students tell him that he's the only adult they feel comfortable turning to, Harris said. The students also tell him that some feel racial aggressions, hear the N-word used on campus, and feel the incidents aren't being disciplined appropriately.

"If I could be the African American male those students can look up to or look to for some cultural relevance, somebody who gets them, then I'm glad to do it. It's not a begrudging kind of pressure, it's a good pressure," Harris said. "If it wasn't for them, I would be gone already."