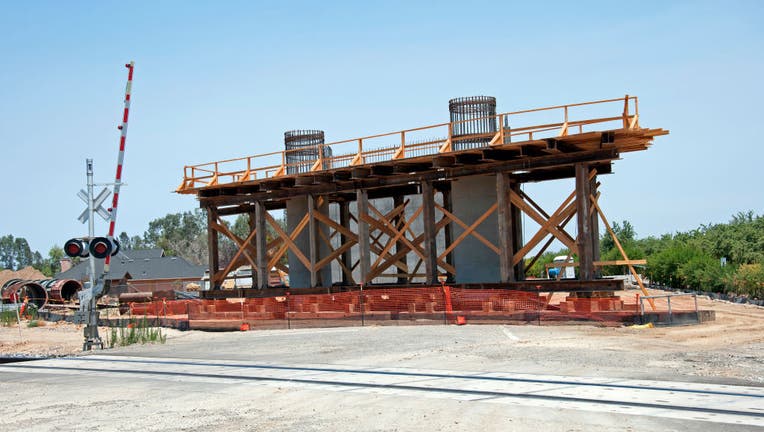 MADERA, CA - JULY 13: (EDITORIAL USE ONLY) In this handout image provided by the California High-Speed Rail Authority, Construction of the north abutment overcrossing that will carry traffic over future high-speed and existing BNSF rail lines outside

LOS ANGELES - A letter from a major contractor blames the state for delays in building California's bullet train, contradicting claims that the line’s construction pace is on target and warning the project could miss a key 2022 federal deadline.

The 36-page letter obtained by the Los Angeles Times alleges the high-speed rail project faces problems including continuing delays in obtaining land for the line and the state’s failure to finalize deals with outside parties such as utilities and freight railroads.

The delays will result in stalled work and layoffs, construction giant Tutor Perini says in the letter.

As of mid-November, construction crews could not build on more than 500 parcels in the Fresno area because the California High Speed Rail Authority still lacks proper documentation, according to the Jan. 4 letter. The company has completed all the work that could be done efficiently and as a result is now operating at other sites at a slower pace, the Times reported.

"It is beyond comprehension that as of this day, more than two thousand and six hundred calendar days after (official approval to start construction) that the authority has not obtained all of the right of way … " wrote Tutor Perini Vice President of Operations Ghassan Ariqat to Garth Fernandez, the contracting chief at the state rail authority.

The conditions described by the letter jeopardize the project’s long-range goals, because it is already struggling to complete even a portion of its original vision of a Los Angeles-to-San Francisco bullet train, the newspaper said. The letter indicates that delays and cost overruns are poised to grow worse.

Rail authority Chief Executive Brian Kelly said in a statement to the Times that the letter "attempts to set out why project challenges are everybody else’s fault."

"As we do with all contractor claims, our commercial and legal teams will evaluate the letter and provide a full response, including an articulation of where the contractor’s claims are mistaken or otherwise in error," Kelly wrote.

Kelly said the authority has worked with Tutor Perini over the last 18 months to achieve a number of benchmarks, including having an average of 344 workers on job sites as of the end of October and completing 92% of the design work for the Fresno segment.

The Times said President-elect Joe Biden can relieve some of the pressure the Trump administration placed on the project, such as amending the 2022 deadline for building structures.

And Biden could release $927 million in grant money that President Donald Trump terminated. But the project would still face the consequences of the delays, the newspaper said.