California Gov. Gavin Newsom kicked off his second and final term on Friday by contrasting his leadership of the nation’s largest Democratic stronghold with that of Republican leaders he branded as "small men in big offices."

SACRAMENTO, Calif. - California Gov. Gavin Newsom kicked off his second and final term on Friday by contrasting his leadership of the nation’s largest Democratic stronghold with that of Republican leaders he branded as "small men in big offices."

"California has been freedom’s force multiplier, protecting liberty from a rising tide of oppression taking root in statehouses -- weakness, masquerading as strength," Newsom said as he stood in front of the state Capitol.

Though he didn’t name names, his targets were obvious. Newsom chose Jan. 6 for his inaugural ceremonies to mark the second anniversary of the violent attack by Trump supporters on the U.S. Capitol, and he’s spent the past year decrying Republican Govs. Ron DeSantis of Florida and Greg Abbott of Texas.

"The ugliness that overflowed on January 6th, 2021, we know this, was in fact decades in the making — fomented by people who have a very different vision of America’s future," Newsom said.

He delivered his remarks after leading a march with his wife and four children through downtown Sacramento. The sun was finally out after days of relentless winds and rain pounding much of the state.

His second term officially began Monday. The outdoor ceremony followed a series of massive storms that brought heavy rain, snow and intense winds across the state. The deluge prompted Newsom to declare a state of emergency and offered a reminder of the bread-and-butter work of governing the nation’s most populous state.

Newsom began his first term in 2019 with Trump as a clear foil in Washington. With Biden now in the White House, Newsom has pivoted his fire toward fellow governors like DeSantis and Abbott.

He continued to draw that contrast Friday, decrying states that "make it harder to vote and easier to buy illegal guns," and that "silence speech, fire teachers, kidnap migrants, subjugate women ... and even demonize Mickey Mouse."

Both Newsom and DeSantis are widely seen as future presidential contenders, though perhaps not against each other. Newsom has committed to supporting Biden if the president seeks a second term, as he currently plans to do. DeSantis, meanwhile, has not ruled out a 2024 run — even as Trump seeks a return to the White House.

Their competing visions of governance — including how best to promote "freedom" — showcase the political polarization that’s taken hold across the nation. In his own inaugural address Tuesday, DeSantis touched on national issues like immigration and inflation, and decried "wokeness."

"They have two starkly different philosophies on how to run a state and that choice will be on the ballot at some point, whether its either one of those two or other folks in their parties," said Bill Burton, a California political consultant who was a spokesman for former President Barack Obama.

The ongoing drama in Washington that has kept GOP Rep. Kevin McCarthy, a fellow Californian, from securing the speakership in the U.S. House also boosts Newsom’s argument that Democrats are better at governing, said Kim Nalder, a professor of political science at the California State University, Sacramento.

"His narrative that he’s trying to create is: Look how much better things could be if Democrats ran the political world," she said.

"Now that California is facing a massive budget shortfall, these crises will only get worse unless the governor changes course and focuses on the issues facing our state. Texas and Florida are doing just fine on their own, and welcoming more Californians escaping our problems each day," Assemblyman James Gallagher, the chamber’s Republican leader, said in a statement.

As Newsom sought to craft California as a beacon for freedom, he also reflected on painful parts of the state’s history, when voters backed measures to limit rights for immigrants and deny gay people the right to marry. 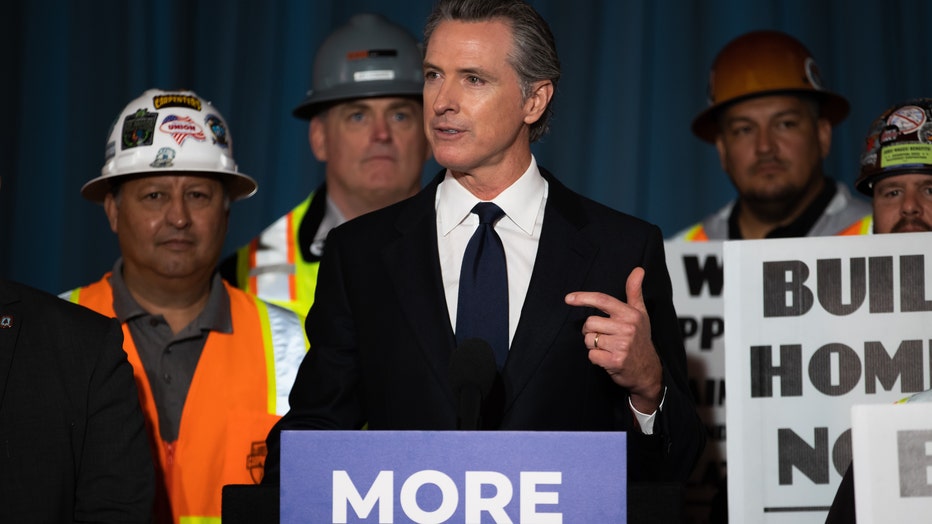 In the end, though, California reversed course with the understanding that "expanding rights is always the right thing to do," he said.

Newsom begins his second term facing headwinds in the form of a budget deficit, an unmitigated homeless crisis and drought that may persist despite the storms. And he’ll go to battle with the oil industry as he pushes lawmakers to impose fines on company profits.

But Californians have twice reinforced their support for Newsom in the past 15 months: first in a 2021 recall attempt that failed and again last November, when he handily won his second term.

Newsom’s first term was dominated by wildfires, a major utility bankruptcy and the coronavirus pandemic, which has killed more than 100,000 Californians, and prompted months-long shutdowns of businesses and schools. But he was also handed a massive budget surplus that allowed him to invest tens of billions in the environment, education, child care and health care.

But he enters his second term with a projected $25 billion budget deficit, which limits what Newsom can spend on and may force budget cuts. He’ll offer his first glimpse at spending priorities next week.

He’s also geared up for a major fight with the oil industry, convincing the Legislature to launch a special session to consider a new fine on oil company profits. Gas prices climbed above $6 per gallon in California, which is well above the national average.

The potential budget deficit in particular may force Newsom to turn more of his attention back home if he hopes to maintain the strong support he’s so far enjoyed, said Sarah Hill, a professor of political science at the California State University, Fullerton, who focuses on state politics.

"If he still is sort of playing this national stage while the state is hurting fiscally and they’re having to make cuts, I don’t think that will play well," she said.