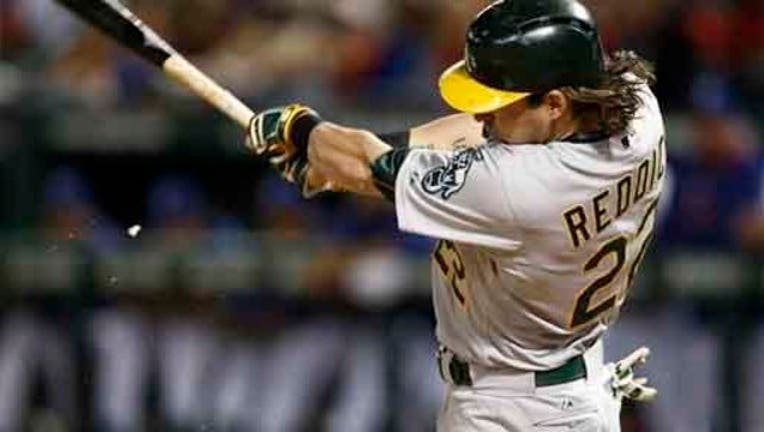 Canha led off the inning with a home run. Brett Lawrie's two-out, two-run double gave the Athletics a 6-5 lead. Canha then singled to score Lawrie.

The Rangers have lost four in a row and seven of their last eight. Oakland had lost its previous two games and six of seven.

In the eighth, Stephen Vogt singled in a run, and Josh Reddick hit a two-run single off Roman Mendez (0-1).

Closer Neftali Feliz gave up the hits by Lawrie and Canha.

Dan Otero (2-1) picked up the win. Tyler Clippard pitched the ninth for his second save in three opportunities.

Canha and Eric Sogard each had two hits for Oakland. Fielder and Adrian Beltre had two apiece for Texas.

The Rangers had only 13 homers in their first 21 games this season, and hadn't hit two in a game since April 15.

Lewis walked two batters and struck out eight, the most by a Texas pitcher this season.

Kazmir allowed three runs on six hits and one walk in six innings. He had entered the game with a 0.99 earned run average.

The Rangers scored their first two runs on leadoff homers by Blanks in the second inning and Fielder in the fourth against Kazmir.

Texas took a 3-0 lead in the fourth on Jake Smolinski's sacrifice fly. The Rangers added two runs in the seventh against Fernando Abad on Leonys Martin's sacrifice fly and Beltre's RBI single.

Athletics: LF Coco Crisp, who hasn't played this season after elbow surgery on April 3, has joined Class A Stockton on a rehab assignment. Manager Bob Melvin said Crisp was scheduled to take batting practice Friday and Saturday, and play in games Sunday and Monday. He could rejoin Oakland on the current trip that includes stops at Minnesota and Seattle.

Rangers: 1B Mitch Moreland, two days removed from elbow surgery, walked past manager Jeff Banister's office and showed him a small bandage above the elbow. Banister said, "He was swinging a sledgehammer, so ."