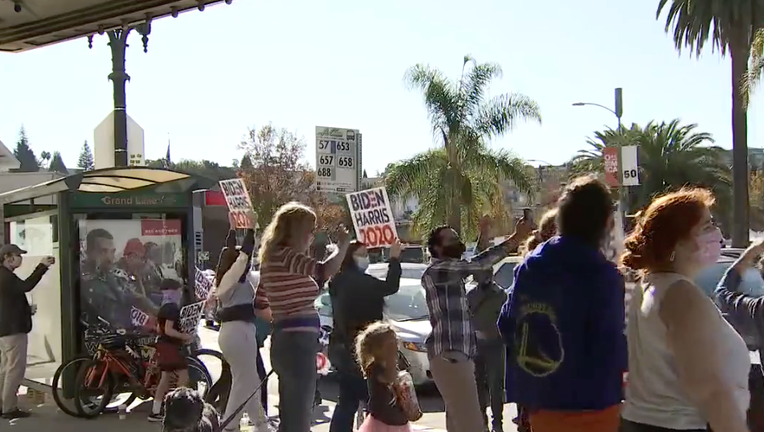 OAKLAND, Calif. - Cars honked. Phones buzzed. And people in the liberal Bay Area on Saturday morning took to the streets with glee.

Chloe Atkins and Erin Flynn donned their rainbow masks and paraded down the streets of Oakland with their dog, Daphne, and small tambourines, less than an hour after Joe Biden and Kamala Harris won the vote count in Pennsylvania, giving him enough electoral college votes to win the presidency and vice presidency, according to major news networks. As of Saturday morning, Biden had 279 electoral college votes. Trump had 214.

"We are out celebrating," Atkins said.

Others out and about on the streets of the Bay Area stood clapping with smiles plastered on their face. A line of folks waiting for pastries outside Market Hall erupted into cheers. "Do it again!" one man shouted. At Lake Merritt, crowds gathered to celebrate. Massive crowds gathered in San Francisco's Castro District. Dozens stood in front of Harris' childhood home in Berkeley. Even surfers catching waves in Bolinas sent up a collective cheer from the Pacific Ocean.

"I just keep refreshing my screen," another man said.

Not everyone in the Bay Area was happy.

"The media doesn’t declare election winners in our country— there is ongoing litigation in multiple states and until the votes are certified, and the electors vote next month, the election is not over... The media call is both premature and irrelevant. The media call is not in the constitution. We will finish counting the ballots and the lawsuits and then once the process is completed, there will be a winner."

However, Dhillon's sentiments were overshadowed by the optimism and hope of Biden-Harris supporters; and the numbers bearing out for the Democratic pair. Even Fox News was among the media networks that called Biden the winner.

Oakland Mayor Libby Schaaf, who is good friends with Harris - who used to be a deputy district attorney in Alameda County before she was San Francisco's District Attorney and California Attorney General -- said:  “Today, America said yes: Yes to decency and compassion. Yes to new leadership that elevates our values of diversity and inclusion. Yes to a Black, Indian-American woman from Oakland, California."

As a city, Schaaf said that Oakland couldn't be more proud to see the "fierce compassion and competence of Kamala Harris enter the White House. Her historic victory arrives at a moment when our deeply divided nation needs her and Joe Biden’s healing vision most."

San Francisco Mayor London N. Breed also was thrilled with the pair of Democrats now in power. And she also gave a nod to Harris, her local roots and diverse background as the nation's first woman, first African-American and first South Asian to sit in the second-highest seat in the land.

This type of background is crucial, Breed said, after years of the Trump administration.

"I am so proud that this country chose leadership, decency, and compassion in our next president," Breed said. "For the first time, millions and millions of Americans chose a Black woman to help lead this country. The pride I feel as a Black woman is hard to put into words. Kamala Harris is a friend and mentor, but most importantly, she is an inspiration to so many of us all across this country. While Kamala’s path to Washington has been her own unique journey, she is just as sure bringing the hopes and dreams of so many little girls with her. I only wish my grandmother, a daughter of slaves and sharecroppers, a woman who raised me to believe that we can all work to make the world a better place, were still alive to see this day." 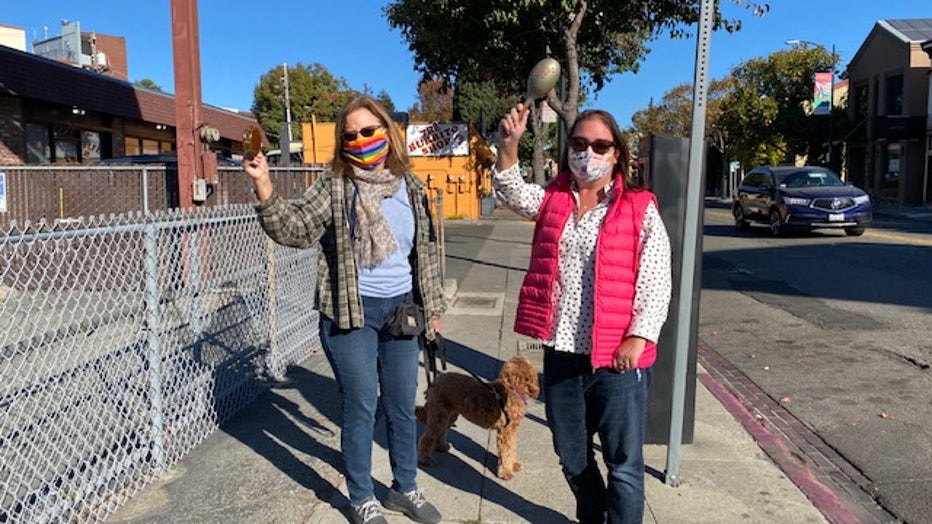 Chloe Atkins and Erin Flynn, with their dog Daphne, cheer in the streets of Oakland after Joe Biden and Kamala Harris are declared the winners of the 2020 Election. Nov. 7, 2020

And the joy wasn't limited to the Bay Area. The good feelings circled around the globe.

In Rome, people gathered in a coffee bar broke out in cheers when media outlets delivered the news. A city official in Berlin said, “After the birth of my son, the election of Joe Biden is by far the best news of this year.”

And throughout the nation, there were at least 74 million Biden-Harris supporters who were feeling pretty good.

Neighbors ran out of their homes in Manhattan and assembled into an unplanned street party, whooping, dancing and high-fiving strangers. In Louisville, Kentucky, Biden supporters gathered on their lawns to toast with champagne. In Harlem, they danced in the streets, banged cowbells and honked their car horns.

“It’s surreal, I feel like I’m free from the clutches of evil,” said Lola Faleit, a 26-year-old human resources manager in New York City. “I feel less worried for my immigrant friends. In 2016, we woke up crying. Today we are celebrating. Look, the sky is clear blue, the sun is out, Mother Nature is celebrating, too.”

Retired teacher and school principal Kay Nicholas, 73, was vacuuming in her home northwest of Detroit when she heard Biden had been declared the winner.

“All I could say is ‘thank God,’” she said, choking up. “It has nothing to do with Democrat or Republican. It has to do with decency. This country has got integrity and hopefully, we can get decency. I think Joe Biden can do it and bring back kindness.”