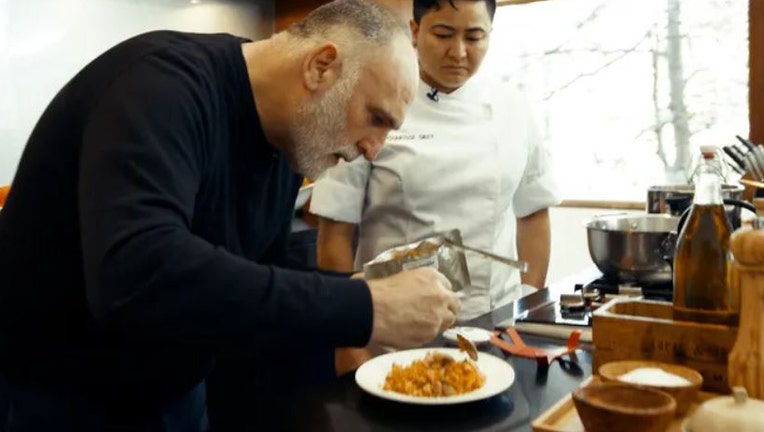 SpaceX is scheduled to launch four men in a Crew Dragon spacecraft to the ISS on April 3 from Kennedy Space Center in Florida. The flight was arranged by Axiom Space and will mark the first time a spacecraft with only private citizens will dock and stay at the space station.

Ahead of the launch, friends and fellow Spaniards López-Alegría and Andrés came up with the idea to bring some of their favorite foods to low-Earth orbit for the private astronauts to share with the NASA, European and Russian astronauts.

"I wanted to provide an homage for traditional cooking around the cooking," Andrés said in a video about the project.

Andrés asked ThinkFoodGroup Director of Research and Development Charisse Grey Dickens to develop the menu and push the boundaries of food.

Dickens said it was challenging to meet the NASA food guidelines, but they were able to use high pressure-cooking methods to create a perfect chicken and mushroom paella recipe for space consumption.

"Food scientists think a lot about calories and nutrition. As a chef, my goal is to meet your palette’s expectations for food," Charisse explained.

Andrés said they chose the dish because it's traditionally eaten from a large pan as a shared family meal.

"I'm so proud because it's going to be eaten, I'm told, for the first time ever by astronauts from different counties and nationalities and backgrounds and they are all going to be eating at once, Paella Valencia, and this makes me so very proud," Andrés said.

Andrés is known for his humanitarian efforts, providing meals to areas worldwide after natural disasters and more recently, the war in Ukraine. The chef is there now with his nonprofit World Central Kitchen.

"In times like these, we need to come together to remember our shared humanity. Believing in longer tables, believing in sharing, remembering we're part of the same planet," the chef tweeted. "That’s the spirit of eating paella from the same pan."

The idea of the wealthy going to space when there are many issues on Earth was not lost on Andrés.

"Some people are going to be saying before we send people to the stars, we should be fixing every problem on planet Earth. I think it's the contrary. I think by dreaming that we can be sending humans to far beyond the stars one day is also what can help us solve many of the problems that we see on Earth today," Andrés said.

Aside from delicious Spanish dishes to be shared by the international crew, the Dragon capsule will also bring science research selected by the private crew that they will conduct while staying on the space station.

The mission will last 10 days, ending with a Dragon splashdown off the coast of Florida.

Get the latest news on this story at FOXWeather.com