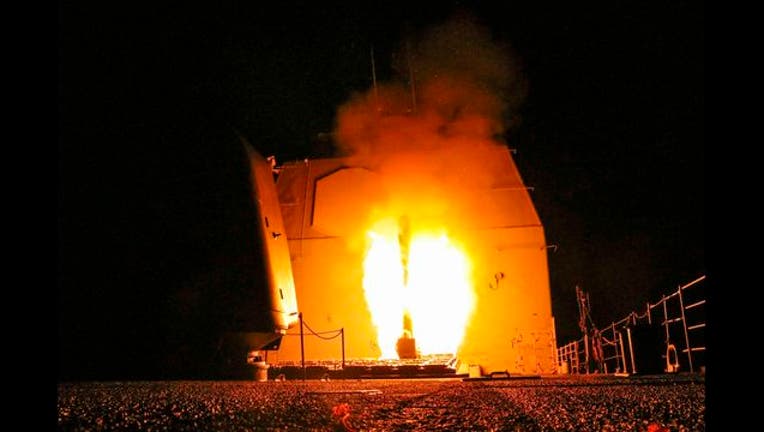 In this handout released by the U.S. Navy, the guided-missile cruiser USS Monterey (CG 61) fires a Tomahawk land attack missile at Syria as part of an allied strike April 14, 2018. (Photo by Matthew Daniels/U.S. Navy via Getty Images)

DOUMA, Syria (AP) - Syrian and Russian authorities prevented independent investigators from going to the scene of a suspected chemical attack, the head of the chemical watchdog group said Monday, blocking international efforts to establish what happened and who was to blame.

The U.S. and France say they have evidence that poison gas was used in the April 7 attack in the opposition-held town of Douma, killing dozens of people, and that Syrian President Bashar Assad's military was behind it.

But they have made none of that evidence public, even after they, along with Britain, bombarded sites they said were linked to Syria's chemical weapons program.

Syria and its ally Russia deny any chemical attack took place, and Russian officials went even further, accusing Britain of staging a "fake" chemical attack. British Prime Minister Theresa May accused the two countries -- whose forces now control the town east of Damascus -- of trying to cover up evidence.

The lack of access to Douma by inspectors from the watchdog group, the Organization for the Prohibition of Chemical Weapons, has left unanswered questions about the attack.

"The team has not yet deployed to Douma," Uzumcu told an executive council meeting of the OPCW in The Hague.

Instead, Syrian authorities offered them 22 people to interview as witnesses, he said, adding that he hoped "all necessary arrangements will be made ... to allow the team to deploy to Douma as soon as possible."

Russian military police were ready to help protect the OPCW experts on their visit to Douma, said Maj. Gen. Yuri Yevtushenko of the Russian military's Reconciliation Center in Syria. Igor Kirillov, a Russian chemical weapons protection expert in The Hague, said the team is set to visit the site Wednesday

Earlier Monday, Russian Deputy Foreign Minister Sergei Ryabkov said the inspectors could not go to the site because they needed approval from the U.N. Department for Safety and Security. He denied that Russia was hampering the mission and suggested the approval was held up because of the Western airstrikes.

"As far as I understand, what is hampering a speedy resolution of this problem is the consequences of the illegal, unlawful military action that Great Britain and other countries conducted on Saturday," he said.

However, U.N. spokesman Stephane Dujarric said the United Nations has "provided the necessary clearances for the OPCW team to go about its work in Douma. We have not denied the team any request for it to go to Douma."

Early Tuesday, the government-run Central Military media reported a missile attack on the Shayrat air base in Homs province. It said Syrian air defenses shot down most of the six missiles fired at the base. It also reported a separate airstrike on the Dumayr air base near Damascus.

It did not elaborate or say who carried out the airstrikes. A Pentagon spokeswoman said there was no U.S. military activity in the area.

Earlier this month, four Iranian military personnel were killed in an airstrike on Syria's T4 air base in Homs. Syria and its allies blamed Israel for that attack. Israel did not confirm or deny mounting the raid.

In Douma, at least 40 people are believed to have died in the suspected chemical attack on April 7. Until Saturday, the city was the last rebel-held town near the capital and the target of a government offensive in February and March that killed hundreds and displaced tens of thousands. Hours after the alleged chemical attack, the rebel faction that controlled the town, the Army of Islam, relented and was evacuated along with thousands of residents.

The Associated Press, during a government-organized visit Monday to Douma, spoke to survivors and witnesses who described being hit by gas. Several said a strange smell started spreading and people screamed, "It's chlorine! It's chlorine!"

The AP visited a two-room underground shelter where Khaled Mahmoud Nuseir said 47 people were killed, including his pregnant wife and two daughters, 18-month-old Qamar and 2 1/2-year-old Nour. A strange smell lingered, nine days after the attack.

Nuseir, 25, said he ran from the shelter to a nearby clinic and fainted. After he was revived, he returned to the shelter and found his wife and daughters dead, with foam coming from their mouths.

He and two other residents accused the rebel Army of Islam of carrying out the attack. As they spoke, government troops were not far away but out of earshot. Nuseir said a gas cylinder was found leaking the poison gas, adding that he didn't think it was dropped from the air because it still looked intact.

Separately, the AP spoke to a medic who was among those who later were evacuated to northern Syria. Ahmed Abed al-Nafaa said helicopters were flying before the attack and when he reached the site, people were screaming "chlorine." He said he tried to enter the shelter but was overcome by a strong smell of chlorine and his comrades pulled him out.

The accounts contradict what the Syrian government and Russia have reported: that there was no gas attack in Douma.

On Sunday, Syria's state-run Al-Ikhbariya TV broadcast interviews with nearly a dozen doctors and medics who said they found no trace of poison gas in Douma. One medic said he heard someone scream "Chemical!" but saw no patients with symptoms. Others said that dust can seep into underground shelters, causing choking and other symptoms associated with chemical attacks.

Both Russia and the Syrian government have welcomed the OPCW mission. The team arrived in Syria on Saturday. The OPCW team does not have a mandate to assign blame for the attack.

Syria's Deputy Foreign Minister Faisal Mekdad has said his country is "fully ready" to cooperate with the OPCW mission. He said government officials met with the delegation several times to discuss cooperation.

Government forces and Russian troops have been deployed in Douma, which is now controlled by the Syrian government. Opposition activists have said the troops might have removed any evidence of chemical weapons' use.

"I can guarantee that Russia has not tampered with the site," Lavrov told the BBC on Monday.

Alexander Shulgin, the Russian envoy at the OPCW in The Hague, said allegations that Russia might destroy evidence reflected Washington's effort to justify Saturday's strikes.

"It's a clumsy effort to find an explanation if the claim of the chemical weapons use in Syria fails to get confirmation," Shulgin said at a briefing. "Our American partners are clearly getting nervous. They are frantically looking for some justification if their claims that served as the reason for the strike don't receive confirmation."

In London, British Prime Minister Theresa May accused Syria and Russia of trying to cover up evidence. She said Syrian officials have been searching evacuees from Douma to ensure samples are not smuggled out.

"A wider operation to conceal the facts of the attack is underway, supported by the Russians," she told lawmakers.

The weekend's airstrikes have increased international tension, as the U.S. and Russia exchanged threats of retaliation.

Russian President Vladimir Putin on Sunday warned that if the strikes continue, "it will inevitably entail chaos in international relations."

NATO Secretary General Jens Stoltenberg said the strikes were a "clear message" to Assad, Russia and Iran that chemical weapons use is not acceptable and that the allies would not stand idle. He spoke in an interview with Turkey's NTV television.
------