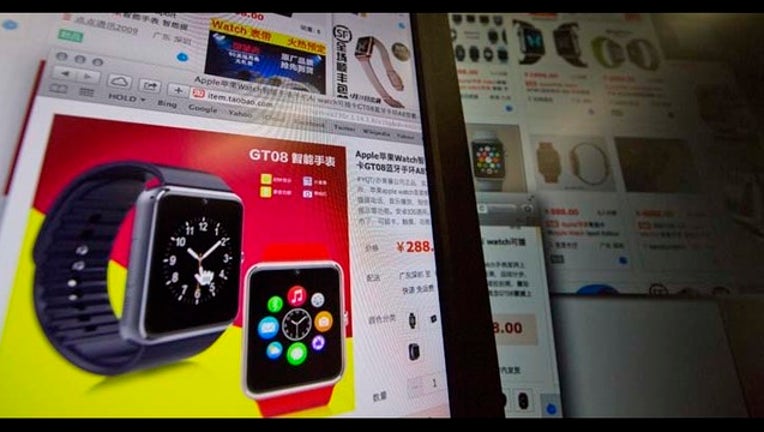 Photos on the vendor's page appear to be the real Apple Watch. It says features on the Chinese version include text messaging and a music player. It starts at 288 yuan ($45), or one-eighth the $349 price of the cheapest Apple Watch.

Alibaba, which listed on the New York Stock Exchange last year after a record initial public offering, has faced criticism in the past for hosting the sale of counterfeit goods. It says it has been taking steps to reduce the problem.

The flood of "me too" smartwatches reflects China's mix of skilled electronics manufacturers and a growing consumer market for bargain-price style.

Most of the world's personal computers and mobile phones are assembled in China. But this country's own companies are only starting to develop design skills and the ability to create breakthrough products.

That has led to the rise of an industry known as "shanzhai," or "mountain forts" — hundreds of small, anonymous manufacturers that quickly copy the design or features of popular foreign mobile phones or other products at a fraction of the price.

At least eight vendors on Taobao advertised watches as "Apple Watch" or "Apple Watch lookalike." Most said they were compatible with Apple's iOS or Google Inc.'s rival Android operating system.

Eight vendors failed to respond to questions from The Associated Press sent through their Taobao accounts.

Asked whether it had taken action against any sellers, Alibaba said in a statement, "Alibaba Group is dedicated to the fight against counterfeits. We work closely with our government partners, brands and industry associations to tackle this issue at its source. We also utilize technology like data mining and big data to scrub our platforms of counterfeits."

In January, a Chinese government agency accused Alibaba of lax oversight and allowing vendors to sell counterfeit goods on Taobao. The dispute was settled within a few days. The agency said its report had no legal force and Alibaba promised to tighten its oversight of vendors.

Apple, based in Cupertino, California, says buyers in China and Hong Kong can pre-order its watch beginning April 10, the same day it takes orders in the United States, Japan, Britain, France and Germany.

Most previous Apple products were released in China weeks or months after other markets. That fueled a trade in iPhones that were smuggled in for sale to gadget fans who were willing to pay a premium.

Apple lookalikes also are on sale in markets in the southern city of Shenzhen, "the mainland's best place to shop for ... hi-tech knockoffs," according to the Hong Kong newspaper The South China Morning Post.