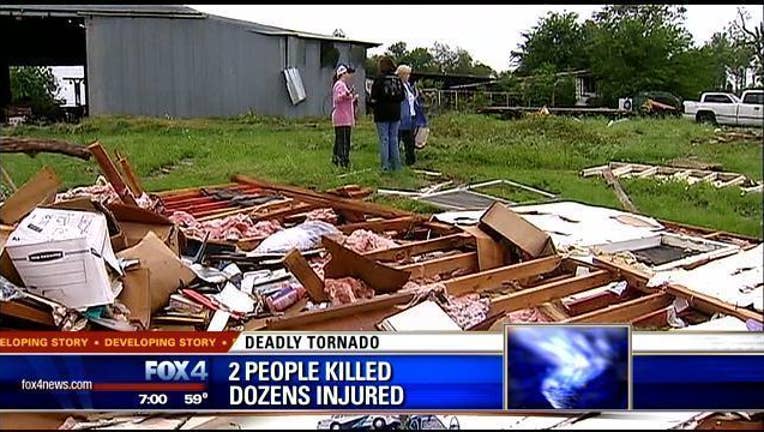 The National Weather Service confirmed it was an EF3 tornado that ripped through Van, a town of about 2,600 residents located 60 miles southeast of Dallas on Interstate 20.

During a press conference Tuesday, city leaders said the path of destruction was about 10 miles long and 700 yards wide. The tornado sustained winds of 140 miles per hour.

The death toll remains at two. David Tapley, a retired Garland police officer, and his wife Brenda were killed in their mobile home.

Two other people remain in critical condition, but dozens of others people who were hurt have been released from the hospital.

Rescuers also found no new victims and all of the people who were originally unaccounted for were found safe, city leaders said.

"We are in much better shape today than yesterday," said Mayor Dean Stone.

The Van Independent School District announced Tuesday it had canceled all classes for the rest of the week.

The district also plans to apply for a waiver that would cancel the remainder of the school year for ages PreK through third grade.

The waiver would also allow the district to postpone STAAR testing for 5th and 8th graders.

The elementary and intermediate schools, along with the school district's administrative building, were heavily damaged in the storm. The roof of the cafeteria serving both schools collapsed, according to Superintendent Don Dunn.

Security fences were set up around the damaged schools and a heavy law enforcement presence kept looters away.

Students who attend those schools will likely have to attend classes on another campus until the summer break.

Utilities companies have restored most of the power to the city.

The American Red Cross continues to provide shelter, food, water and insurance help for many of the people who lost their homes. An estimated 120 houses were damaged or destroyed.

And, donations have been pouring into the town. So far 44,000 pounds of water alone have been donated.