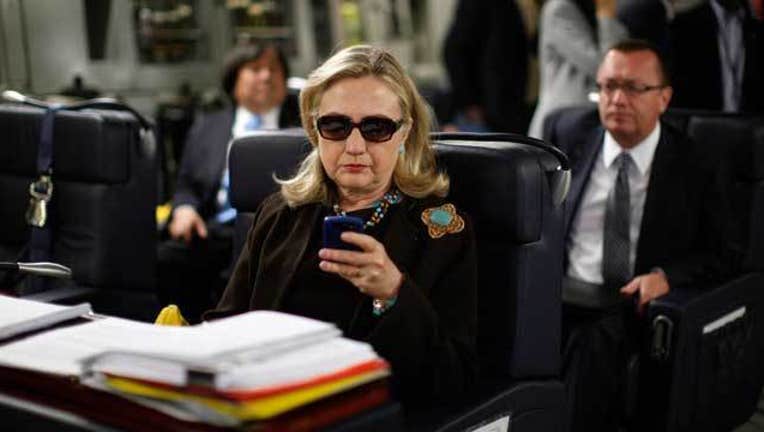 WASHINGTON (AP) — The photo that became an Internet meme — Hillary Rodham Clinton, wearing sunglasses, staring at her BlackBerry — troubles Republicans on the House committee investigating the deadly attacks in Benghazi, Libya, for what they say is an incomprehensible omission.

Chairman Trey Gowdy, R-S.C., wants to know why the panel has no emails from Oct. 18, 2011, the day the photo was taken as Clinton, then the secretary of state, was en route to Tripoli. In fact, the committee says it has no emails at all from Clinton's trip to Libya, which occurred just days before longtime Libyan ruler Moammar Gadhafi was killed.

Gowdy said in an interview that it "strains credulity" to believe that while on a trip to Libya to discuss Libyan policy "there's not a single document that has been turned over to Congress."

The recent disclosure that Clinton, a likely Democratic candidate for president in 2016, relied on personal emails to conduct government business has breathed new life into the Benghazi panel's investigation, which had threatened to stall amid accusations of partisanship on both sides.

In the past week alone, Gowdy has issued a subpoena for Clinton's emails and called for an independent review of Clinton's private email server. House Speaker John Boehner, meanwhile, has not ruled out a vote in the full House to force Clinton to turn over her server, setting up a high-stakes confrontation between the GOP-led Congress and Clinton, widely considered the Democratic front-runner for president.

The House Oversight and Government Reform Committee said it will send a letter Friday to the State Department and Clinton formally requesting answers to a series of questions about Clinton's emails.

Gowdy called the Libyan trip emblematic of "huge gaps" — stretching for months — in documents turned over to the committee by the State Department. "It's not up to Secretary Clinton to decide what is a public record and what is not," said Gowdy, who wants Clinton to appear before his committee at least twice: once to talk about emails and a second time to offer testimony on Benghazi.

Gowdy and other Republicans said the 2011 Libya trip fits within the committee's charter to look at events and policies in Libya that "contributed" to the 2012 attacks, "as well as those that affected the ability of the United States to prepare for the attacks."

Gowdy has said the panel will produce a comprehensive report addressing actions and policies before, during and after the Benghazi attacks.

Gowdy, a former prosecutor, denied claims by some Democrats that he is looking to expand the jurisdiction of the Benghazi committee to focus on Clinton, possibly slowing or derailing her presidential bid.

"It's only about her now because of the new revelations," he said. "To me this is still about Benghazi."

The committee's turn in the spotlight comes just a few weeks after Democrats complained that the Benghazi investigation was moving at a "glacial" pace and that Gowdy was leading the panel on increasingly partisan path. In late January, Gowdy vowed to "ratchet up" an inquiry he said was being hobbled by resistance from the Obama administration.

The inquiry comes after several Republican-led House investigations debunked various conspiracy theories about the attacks. A 2014 report by the House Intelligence Committee determined there was no intelligence failure, no delay in sending a CIA rescue team, no missed opportunity for a military rescue and no evidence the CIA was covertly shipping arms from Libya to Syria.

Military officers told two other GOP-led House committees that there were no "stand-down orders," and the committees' investigations found that incomplete and contradictory information complicated efforts to get Americans out of Libya.

Rep. Elijah Cummings of Maryland, the senior Democrat on the Benghazi panel, called the dispute over Clinton's emails a distraction and said he hopes the Benghazi panel "will return to its purpose of investigating the attacks in Benghazi instead of attempting to impact the 2016 presidential election."

Rep. Adam Schiff of California, the senior Democrat on the Intelligence panel and a member of the Benghazi committee, urged Gowdy and other Republicans to conclude an investigation that "still has no clear scope or objective." Ten months after it was created in May 2014, the GOP-led committee "still has no answer to the question ... just what are we looking for?" Schiff said.

Democrats have only themselves to blame for any uncertainty — and for the renewed focus on Clinton, Gowdy said.

"You can blame House Republicans for a lot of things, but we didn't advise Secretary Clinton to set up a personal email server," he said. "We didn't create the drama."

Rep. Peter Roskam, R-Ill., another member of the Benghazi committee, said the gaps in emails submitted to the committee are significant. As a result, "consequential time periods related to Benghazi remain unaccounted for," he said.

"I'm afraid this committee is really becoming a surrogate of the Republican National Committee, and that's not something that a taxpayer-funded investigative committee has any business doing," Schiff said.