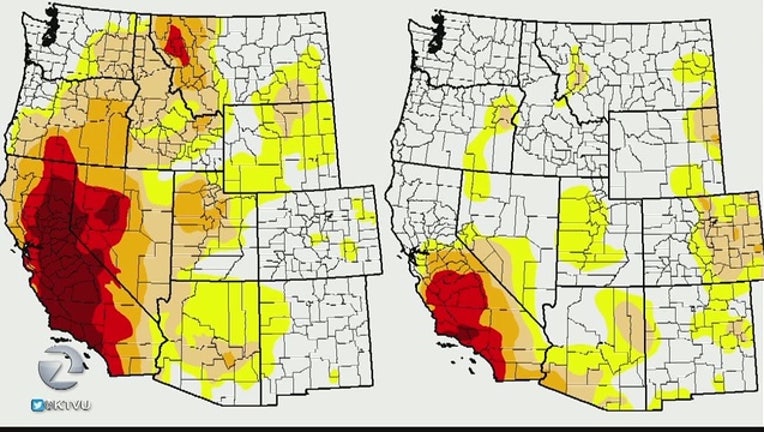 FRESNO, Calif. (AP) - A coalition of state and local leaders is pressing California to lift restrictions on urban water use after the wettest winter for years.

Water regulators in Sacramento on Wednesday will decide on a recommendation to extend the drought rules, uncertain if rain and snow will continue through spring.

Californians heeded the call during the historic drought, taking shorter showers and ripping out their lawns during the five-year drought, but the weather has dramatically changed, which everybody can see, Nielsen says in a letter to the governor also signed by other officials.

"This is an emergency?" Nielsen told The Associated Press. "It's pretty hard to argue to the public, the citizens of California, that we are now in an emergency."

So much rain had fallen in Los Angeles by Monday that the yearly total for downtown hit about 15 ½ inches - exceeding the normal annual rainfall, even though the new rain year won't start until October, the National Weather Service says.

The state, however, is "not yet declaring an end to the drought," California Natural Resources Agency spokeswoman Nancy Vogel said in an emailed statement. The governor's office referred request for comment to Vogel.

Some residents in the San Joaquin Valley still survive on bottled water because their wells are depleted, and swings from wet to dry years is only intensifying with climate change, Vogel said.

Brown declared the drought emergency in 2014 during the driest four-year period in California's recorded history.

He later ordered California's nearly 40 million people to cut water use by 25 percent -the first mandate of its kind in the state's history.

Tracy Quinn, a senior water policy analyst with the Natural Resources Defense Council, wants the state to hold onto its restrictions. She says it's unclear what weather the spring will bring, let alone next year.

She says water districts aren't always motivated by conservation but rather by money, because their revenue is tied to how much water they sell to customers. Many water districts say they've invested millions in water efficiency and don't need the state's oversight.

The healthy snowpack and brimming reservoirs also don't tell the whole story, she said, adding that the drought decimated groundwater supplies and will take years to be replenished.

"This is a long game," Quinn said. "Although we have had a welcomed respite from the drought, we don't know whether this is an aberration in an extended drought."

AP writers Ellen Knickmeyer in Sonoma and Christopher Weber in Los Angeles contributed to this story.

This story has been corrected to say that 40 homes in Marin County flooded Tuesday, not 50.