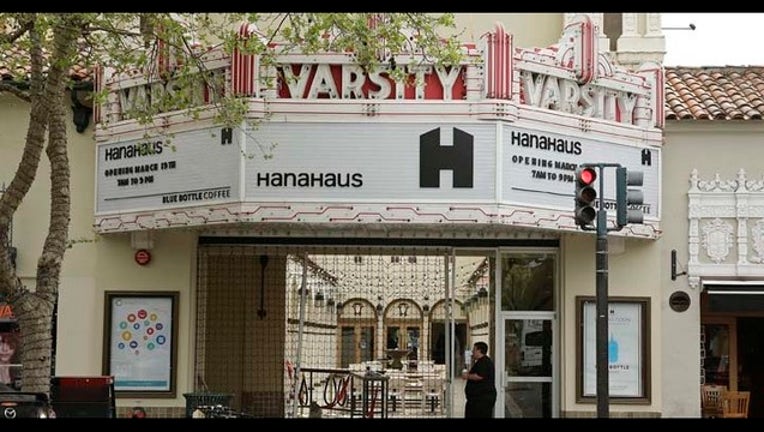 SAN FRANCISCO (AP) — Silicon Valley has no shortage of coffee shops where sleep-starved programmers and eager entrepreneurs sit hunched over laptop computers and talk about ideas for launching the next Google or Facebook. Now a giant tech company is opening its own cafe for the same clientele.

German software maker SAP is hoping to draw a walk-in crowd of techies — and perhaps raise its own Silicon Valley profile — by selling high-end coffee with a side of free Wi-Fi and programming advice. It's opening a cafe this week inside a former cinema in downtown Palo Alto. The spot is not far from a slew of tech startups, Stanford University and the headquarters of Facebook, Hewlett-Packard and several venture capital firms that invest in new companies.

While many companies operate employee cafes, most aren't open to the public. SAP, which sells software to big corporations, said patrons at the new HanaHaus cafe won't necessarily be SAP employees or SAP's usual customers.

Instead, SAP's Sanjay Shirole says he wants to foster a creative environment where anyone can sip coffee, swap ideas or pound their computer keyboards alongside others "who share a passion for technology."

SAP is partnering with gourmet coffee retailer Blue Bottle to sell refreshments. Shirole describes the operation as a sort of community center, with free seating for anyone who buys coffee or food.

The cafe will also offer an auditorium and rentable work space for groups or individuals who want to reserve seats for an extended time. He's also promising a desk where SAP engineers and independent consultants will offer free advice on software design or similar topics.

The cafe seems unlikely to make money for SAP. But veteran tech analyst Rob Enderle said it might help a staid, older company make new friends, especially among startup founders and young programmers who are often heavily recruited by better-known, "hot" companies such as Apple, Google and Facebook.

"It might make them seem a little more fun," said Enderle, who called it an "only in Silicon Valley" idea.

While the cafe won't have SAP's logo on its doors or walls, the name HanaHaus comes from the company's flagship database product, known as HANA.

SAP has about 4,000 employees in Silicon Valley — mostly based in a suburban office park, away from the bustle of downtown Palo Alto.

"We feel we need to be engaged beyond our walls," Shirole said.