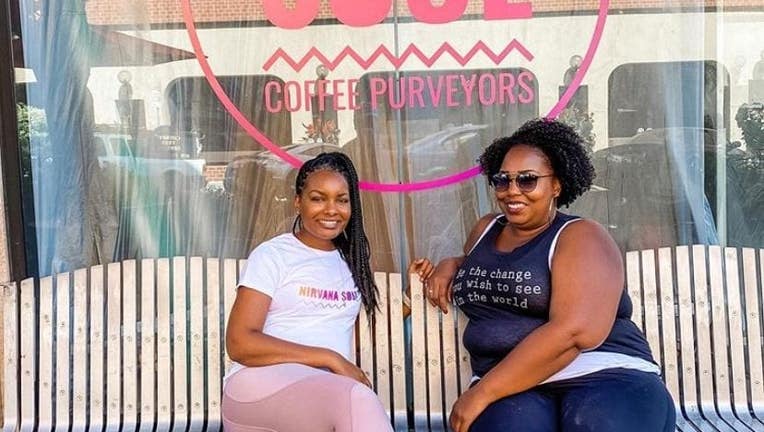 SAN JOSE, Calif. - Coffee shops abound but not many are owned by two Black women who happen to be sisters.

Jeronica Macey and Be'Anka Ashaolu are cofounders of Nirvana Soul, which is opening in downtown San Jose later this month.

Macey said she always wanted to open a coffee shop and now, thanks to her sister's unwavering support, her dream is becoming a reality after 10 years of planning.

"We knew especially with everything that is going on people needed a space of calm, love, and hope. Every new business owner would be somewhat concerned but I am just trying to focus on the positive," Macey said.

"Caffe Frascati reflects the values and culture we plan to continue at Nirvana Soul," Ashaolu said. "It's been a place for artists and coffee lovers alike. When we first envisioned Nirvana Soul, we knew music, poetry and art would be a large part of the experience."

"They're opening at possibly the hardest time there has ever been to open a small business, but their ingenuity, resiliency, design sense and social media presence is going to help give them the best possible platform to launch," he said.

In addition to concerns about coronavirus, the sisters faced many hurdles along the way - not the least of which was repeatedly being denied a bank loan.

"We'd walk into a bank and just because of the color of our skin they'd say, 'No,' without even knowing if we owned a home and had money," Macey said. "It took us a really long time to be approved by the Small Business Administration to secure funding and we got the bare minimum."

Macey said her friends who aren't Black and own businesses were shocked by what the sisters went through to get approved.

"There is injustice," she said. "Things have to change. There is a seat at the table for everybody. I am qualified and I don't want anyone to make me feel that I'm not, and I don't want that for anyone else. We have to help each other to do better and be better."

In pursuit of racial equity, Facebook on June 19 pledged $200 million in support of Black businesses, creators and nonprofits serving Black communities. The company has committed to investing $1.1 billion to aid Black and diverse communities by the end of 2021.

"The COVID-19 pandemic has shed light on the disparities already facing minority-owned small businesses. Enhancing and making MBDA permanent will provide the resources and funding needed for minority-owned businesses to succeed in California and across the nation," Harris said in a report from the U.S. Senate Committee on Small Business and Entrepreneurship.

Ashaolu said she views the struggles as part of their journey. The sisters say they are looking forward to contributing to San Jose's "colorful culture while carving out a unique space for people of color."

"The funny thing is people keep asking us where we're from; like we're outsiders coming in and taking over a beloved community shop," Ashaolu said. "That just goes to show you how rare it is to see Black and women-owned businesses here."

Things are finally starting to turn around for the sisters: painting is almost finished and they've hired their first employee. They're selling merchandise online and have already sold more than 100 bags of coffee. To promote their brand, they're also doing popups on Sunday mornings at Del Monte Park in downtown San Jose.

"Thank God we decided to open a coffee shop. It forces people to take a walk and grab a cup of coffee. People need to go outside, get some air and have a conversation with someone," Macey said. "My hope is that we're playing a part in bringing people together."