A Contra Costa County sheriff’s deputy has resigned after his ex-girlfriend reported to Internal Affairs that he had been texting unprofessional photos from inside the Martinez jail while on duty, KTVU has learned.

MARTINEZ, Calif. - A Contra Costa County sheriff’s deputy has resigned after his ex-girlfriend reported to Internal Affairs that he had been texting unprofessional photos from inside the Martinez jail while on duty, KTVU has learned.

Along with the pictures, which were reviewed by KTVU and confirmed by the deputy's union, Chris Spadaro also called the inmates "dirt balls," "vermin" and "animals" in his texts, and he showed at least one inmate in an ambulance on his way to the hospital, in violation of both sheriff's policy and federal medical privacy laws.

After 18 years with the department, Spadaro is no longer a member of the union and is no longer employed by the Sheriff’s Office, according to Deputy Sheriffs Association President Shawn Welch.

Spadaro resigned Thursday afternoon, following an IA investigation launched at the end of January by his ex-girlfriend, Reshmika Dayal.

As for the inmate going to the hospital, Dayal said that’s a clear violation of the person’s federal HIPPA rights.

“I know they’re in jail for a reason,” she said. “They did something wrong. But they also have a right to their own privacy.”

Dayal said she confronted Spadaro about the unprofessionalism of texting her such photos, and he eventually broke up with her in late January after a series of conversations because of the pressure she said she placed on him. She called KTVU and went to Internal Affairs shortly after that. 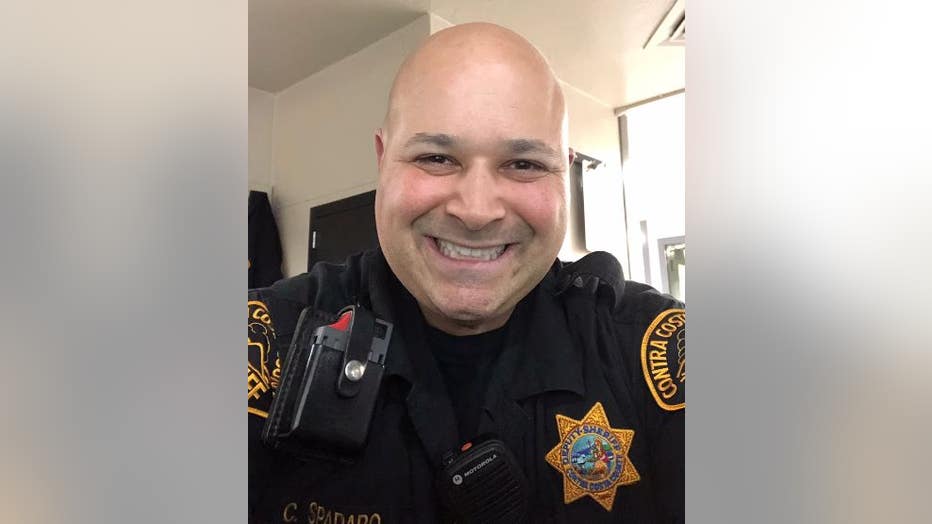 Spadaro did not return two phone calls seeking comment. Lawyers from Rain, Lucia and Stern, the firm that used to represent Spadaro for his past employment troubles, also declined a request for an interview. Jimmy Lee, a spokesman for the Sheriff’s Office, declined to comment on behalf of Sheriff David Livingston.

Spadaro’s resignation comes after KTVU published a story on Jan. 9, revealing that Livingston had wanted to fire him after superiors found he lied about a DUI and was purposely avoiding paying his bridge tolls on his way to work in 2016, public records show.  The 103 pages were released almost a year after SB 1421, a police transparency law, took effect. The law now mandates that police agencies disclose personnel files on officers whose superiors found they lied or committed sexual assault or if they caused great body injury or death. Since Spadaro originaly told superiors he only had one beer, and it turned out his blood alcohol content was .14 percent, the records were eventually unsealed.

Livingston also found Spadaro’s conduct “unbecoming of an officer,” especially since Spadaro acknowledged that he didn’t pay his bridge toll on his way from Vacaville to the Martinez Detention Facility every day for nearly half a year.

Reshmika Dayal looks at her phone.

However, Spadaro was able to avoid getting fired with the help of the Rains law firm. He kept his job as long as he agreed to a brief pay reduction and agreed to be on probation for three years. That period hadn’t yet expired.

In addition, four years after he was hired, Spadaro had been named in a sexual harassment civil suit in 2006. According to the suit, he was not the main perpetrator. But in 2008, the county ended up paying $173,000 to the former female deputy who brought the suit.

Dayal saw the story about the DUI and the bridge tolls and came forward to KTVU in mid-January. She didn't know about Spadaro's past, and when she confronted him, it seemed to her as if her new boyfriend, whom she began dating in late Novemer, hadn't changed his ways despite his assurances to her that he had.

She also had growing concerns over texts he sent her from the jail between November and January.

Dayal provided the texts to KTVU, who cross-checked Spadaro’s phone number with public records. Union president Shawn Welch also confirmed that Spadaro had been under investigation for texting the photos.

One photo shows an inmate going to the hospital in an ambulance. Spadaro wrote, “bad guy to hospital” and “murder suspect” on the message he sent to Dayal.

Another text shows a photo of three inmates inside an open area inside the jail. Spadaro wrote: “They’re getting ready for ‘Commissary.’ The dirt balls order junk food and it comes Thursday nights.”

A third photo shows what appears to be handmade weapons used in a fight. Spadaro texted: “4-5 jumped one, (Black on Black) victim pulled a weapon to defend himself.”

In other texts, Spadaro called inmates “animals,” “vermin” and in another, he wrote to Dayal with a smiling selfie of himself, adding later in the text string: “Serial masturbators on this housing unit.”

It's not just Dayal who thought the texts and photos were not OK.

Jess Jollett, executive director of Lift Up Contra Costa, a racial justice coalition of nonprofits and unions, said this attitude toward inmates shows "a larger culture in our nation and in our county about how we view these folks, who are mostly Black, brown and who are poor." She pointed out that 74% of the incarcerated people in Contra Costa County jails are pre-trial, meaning they have not yet been convicted.

“They’re humans,” Welch said of the inmates. “Dehumanizing people is an extremely poor practice. They are people just like us.”

Plus, Welch added:  “It’s a violation of our policy. It’s not our job to take pictures of inmates and send them to others outside our jobs.”

Spadaro has not been with the department for 20 years and he is younger than 50 years old, so Welch explained his draw on his pension will be less than what it would have been if he had reached retirement age. 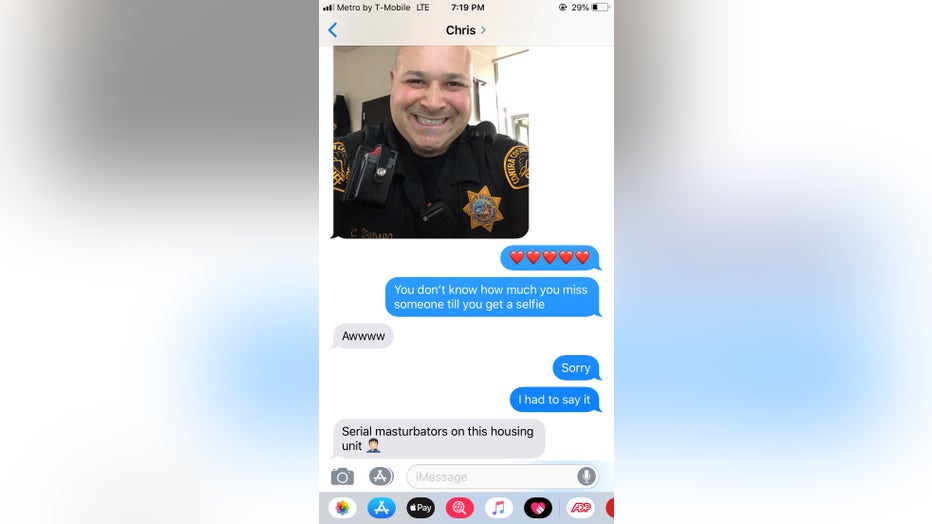 Dayal said it was very hard for her to come forward to Internal Affairs and speak publicly about what Spadaro had done.

Many of her friends have told her to leave well enough alone.

But, she found the photos and texts very “disturbing” and she said she overcame her fears about her own personal safety to make sure that someone who wears the badge is held to the highest of standards.

“I know I’m going to be getting a lot of backlash from people,” she said. “I’m already receiving text messages on my phone that are hateful from friends.”

But, she concluded, she knew what she was seeing wasn’t right.

“What he’s doing is wrong,” she said. “And I’ve been brought up by my mom that if you see something wrong, say it.”

She had hoped her coming forward would mean that Spadaro would lose his job. She was not prepared for the fact that he would resign in the middle of the Internal Affairs investigation.

Dayal said she hoped that by speaking out, other deputies would see that "their job is to protect everybody and that taking advantage of the job, taking pictures, is not something that will be taken lightly.”