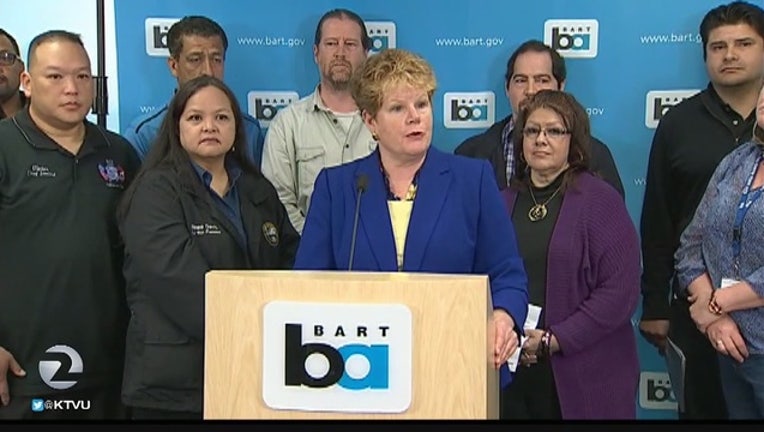 OAKLAND, Calif. (KTVU) - Five years of labor peace and no strikes at BART became official Thursday as the BART (Bay Area Rapid Transit) board ratified new contracts with all its unions.

The nine-member BART Board voted 7 to 2 in favor of the contracts that will expire in mid-2021.

"So we need to bring back to our riders the high quality of service that we've had in the past and I think we can only do that by focusing on all these issues that are coming before us," says Gail Murray, a BART Board Member.

"At a minimum, I feel this Board could have reopened the negotiations and done thorough negotiations rather than just kicking the can down the road extending these bloated benefits and adding wages on top," counters BART Board Member, Zakhary Mallet.

Getting this done now, should eliminate any strike concerns voters may have when they vote on a multi-billion dollar BART bond in November.

"I've heard some people describe us as getting to this agreement as some sort of as gimmick," says BART Board Member Rebecca Saltzman.

BART and its unions deny this, but the bad feelings among many BART riders and voters due to the contentious and disruptive labor war and strikes of 2013 remain.

"We all know that this couldn't have happened if this was a gimmick," says Ms. Saltzman.

For BART riders KTVU met with, long-term stability and reliability are most welcome. "I think it's gonna mean that they'll get to work on time and they'll get home on time and that's what BART is all about. So, I really think it serves the public," says BART rider Allan Jergensen.

"Being on strike was probably the worst prospect for any commuter in the morning going to San Francisco.  So, being that they've made some amends, peace amendments, I'm happy and I think that this will give everybody a sigh of relief who take BART on a regular basis," adds BART rider Alena Bell.

BART says the contracts should not affect or add to already planned fare increases as ridership grows.