BEIJING (AP - As a mysterious new virus enveloped central China's Wuhan early this year, Liu Zhiming mobilized all the resources of his hospital in the city's Wuchang district to deal with the thousands of sick people arriving daily, threatening to overwhelm the local health care system.

That dedication appears to have cost him his life, with Wuhan's health bureau announcing Tuesday that he became infected and died despite “all-out" attempts to save him.

Liu is at least the seventh health worker to die of the COVID-19 disease among the more than 1,700 doctors and nurses who have become sick. His death comes as authorities are cautiously cheering a reduction in the number of new daily cases and deaths, along with the results of a study showing most people who contracted the virus experienced only mild symptoms. 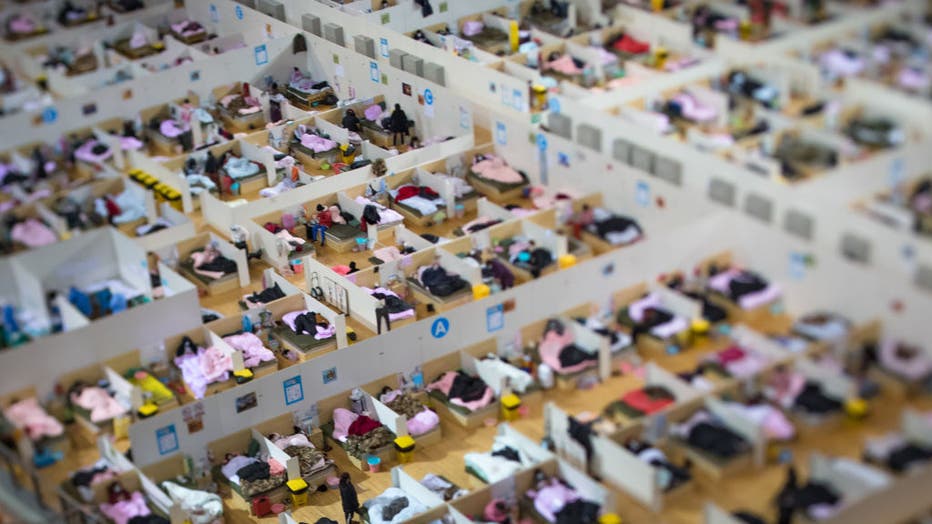 China on Tuesday reported 1,886 new cases and 98 more deaths. That raised the number of deaths in mainland China to 1,868 and the total number of confirmed cases to 72,436.

Japan, meanwhile, announced that 88 more cases of the virus were confirmed aboard a quarantined cruise ship, the Diamond Princess, bringing the total to 542 among the 3,700 initially on board.

The outbreak has caused massive disruptions and China may postpone its biggest political meeting of the year to avoid having people travel to Beijing while the virus is still spreading. One of the automotive industry's biggest events, China's biannual auto show, also is being postponed, and many sports and entertainment events have been delayed or canceled.

Despite strict rules on use of masks and safety suits, medical workers have been prominent among the victims, particularly in the early stage of the outbreak.

In announcing Liu's death, the Wuhan Municipal Health Commission said he had taken part in the battle against the virus from the start and had made “important contributions in the work of fighting and controlling" the virus.

During that process, "unfortunately he became infected and passed away at 10:54 Tuesday morning at the age of 51 after all-out efforts to save him failed," the commission said.

The Hubei native had graduated from Wuhan University's School of Medicine in 1991 and went on to a career as a chief physician, neurosurgeon and administrator.

Earlier this month, public outrage was stirred by the death from the virus of Wuhan doctor Li Wenliang, who had been threatened by police after releasing word of an outbreak of an unusual respiratory illness in December before it had spread widely and the city was placed under quarantine.

Wuhan and its surrounding cities in Hubei province have accounted for the vast majority of infections and deaths, prompting the government to enforce a travel ban that has spread to other parts of the country and now includes a mandatory 14-day self-quarantine period for anyone traveling outside their home district. Two new prefabricated hospitals have been built to deal with the overflow in Wuhan and thousands of medical staff have been brought in from other parts of the country to help.

A study by the Chinese Center for Disease Control and Prevention found more than 80% of the cases studied were mild and the number of new infections seemed to be falling since early this month. World Health Organization Director-General Tedros Adhanom Ghebreyesus said it was too early to know if the reported decline would continue, however. "Every scenario is still on the table," he said at a news conference.

The seeming drop in the number of new cases follows a large spike last week after Hubei province began counting cases by doctors' diagnoses without waiting for laboratory test results. Health authorities there said the change was meant to get patients treated faster.

The Chinese study examined 44,672 cases of the disease that were confirmed in the mainland as of Feb. 11. Severe symptoms such as pneumonia occurred in 14% of them and critical illness in 5%. The fatality rate was 2.3% — 2.8% for males versus 1.7% for females.

The death rate is lower than for SARS and MERS, diseases caused by coronaviruses related to the one that causes COVID-19. But the new virus ultimately could prove more deadly if it spreads to far more people than the others did. The COVID-19 cases include relatively few children, and the risk of death rises with age or other health problems and was higher in Hubei province versus elsewhere in China.

The study warned that while cases seem to have been declining since Feb. 1, that could change as people return to work and school after the Lunar New Year holidays, typically the biggest travel period for Chinese travelers. Beijing and other governments have sought to forestall that by extending the holiday break, encouraging telecommuting and self-quarantines and conducting health checks on travelers.

Travel to and from the worst-hit central China region was associated with the initial cases of COVID-19 confirmed abroad. But Japan, Singapore and South Korea have identified new cases without clear ties to China or previously known patients, raising concern of the virus spreading locally.

The largest number of cases outside China is the 542 among passengers and crew of the Diamond Princess cruise ship quarantined at a port near Tokyo. The infections have led to heavy criticism of the decision to quarantine passengers on the vessel.

The U.S. evacuated 328 American passengers, with most of them placed in a 14-day quarantine at military bases in California and Texas. Thirteen who tested positive for the virus were taken to a hospital in Omaha, Nebraska, and the U.S. Centers for Disease Control and Prevention said any more passengers who show symptoms will be taken to hospitals.