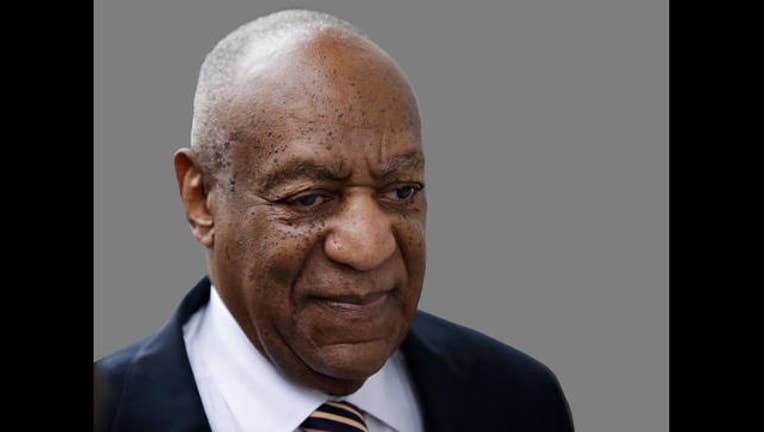 NORRISTOWN, Pa. (AP) -- The woman who accuses Bill Cosby of drugging and violating her more than a decade ago stood by her story at his sex-crimes trial Wednesday, withstanding hours of often ponderous cross-examination that didn't produce the stumbles the TV star might have hoped for.

Calm and composed, Andrea Constand brushed off suggestions she and Cosby had a romantic relationship before the 2004 encounter at his suburban Philadelphia home.

And she explained away the numerous phone calls she made to him afterward by saying she was merely returning Cosby's messages about the women's basketball squad at Temple University, where he was a powerful member of the board of trustees and she was director of team operations.

Constand, 44, left the witness stand after some seven hours of testimony over two days, during which she told the jury that the comedian gave her three blue pills and then penetrated her with his fingers as she lay paralyzed on a couch, unable to tell him to stop.

Constand's mother followed her on the stand and bolstered her daughter's account. Gianna Constand told the jury that she was distraught to learn what Cosby had done to her daughter.

"They were good friends. She viewed him like a father. He is 10 years older than even her own father," the mother testified, breaking down on the stand.

Gianna Constand said she confronted Cosby by phone during a two-hour call in which she said he "surrendered" to her about the sexual encounter and told her he "was sick."

After that conversation, she said, she bought a recording device in hopes that Cosby would again confess to harming her daughter. But she said he kept their next conversation short.

Prosecutors played a recording of the call, in which Cosby offered to pay for Constand's education.

"She could go to school," he said. "If she wanted to do that, then I would be willing to ... pay for the schooling."

Cosby is charged with aggravated indecent assault. The 79-year-old comedian once dubbed America's Dad could spend his life in prison if convicted.

Cosby's lawyers have argued that the sexual encounter with Constand was consensual and have cited phone records showing she called the TV star 53 times afterward, including one call that lasted 20 minutes.

But Constand said she was returning calls Cosby made to her university-issued cellphone about the basketball team.

"She continued to do her job," Constand's lawyer, Dolores Troiani, said outside court. "This man was a trustee at Temple. Of course she was calling him back."

Constand's long-awaited showdown with Cosby's lawyers became bogged down in a painstaking examination of her phone records and police statements, and the defense couldn't budge her off her account of molestation and broken trust.

Constand was direct and polite under cross-examination, even when Agrusa's questioning grew pointed and accusatory. Cosby kept still, looking down at the defense table through most of the morning.

During one exchange, Cosby lawyer Angela Agrusa suggested that Constand once enjoyed a romantic dinner at Cosby's home before the alleged assault.

"You were sitting by the fire. The room was dark. There was a nice mood ...," Agrusa began, paraphrasing Constand's 2005 statement to police.

"I don't know what that means," Constand said.

"The lights were dim and the fire was going," the lawyer continued.

"I don't really remember how dim the lights were, but I did have to eat my dinner," Constand said.

Agrusa also questioned why Constand allowed herself to be alone with Cosby after the comedian had made advances on two occasions -- touching her thigh one time, and trying to open her pants another time.

"So you knew -- you were alone at his home -- that Mr. Cosby was interested in you romantically?" Agrusa asked.

"No, ma'am, he never said a word to me," Constand said. She testified she let Cosby know she wasn't interested in his advances.

Constand said she was going to confront Cosby about the assault during an event he was hosting at his home for high school students. At the same time, Constand said, she was bringing Cosby a gift from a mutual acquaintance.

Agrusa seized on the seeming contradiction: "You were going to confront the man you say assaulted you and you're bringing him bath salts?"

The defense lawyer sought to show that Constand changed her mind about the date of the alleged assault. But Constand perhaps blunted the attack by saying she got confused and initially thought the episode happened in March 2004.

"I was mistaken," she said, unflustered.

Some 60 women have come forward to say Cosby sexually violated them, all but destroying his nice-guy image, but the statute of limitations for prosecution had run out in nearly every case. Constand's case is the only one in which Cosby has been charged. Cosby potentially faces up to 10 years in prison on each of three related aggravated indecent assault charges, although the sentences could be merged, and he could get far less time if convicted.

The Associated Press does not typically identify people who say they are sexual assault victims unless they grant permission, which Constand has done.