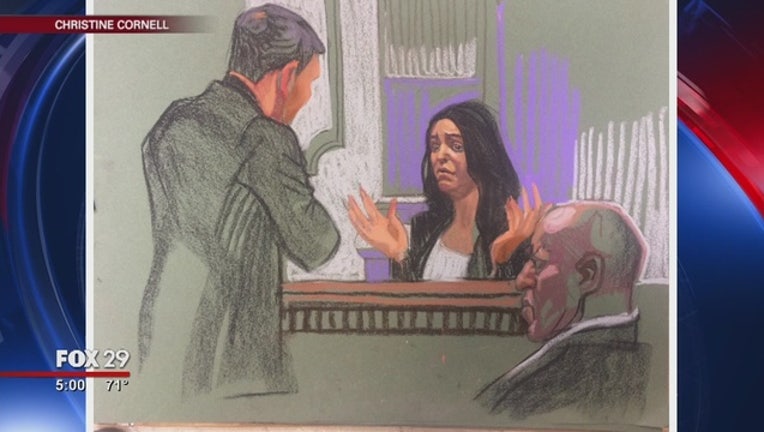 NORRISTOWN, Pa. (AP) -- The jury at Bill Cosby's sexual assault trial heard from the comedian without him actually taking the stand Thursday as prosecutors read into the record his lurid, decade-old testimony about what he said were several sexual encounters with Andrea Constand that culminated in him giving her pills and then reaching into her pants.

Jurors sat riveted and took notes as they heard the TV star say that as he touched Constand's body during one encounter at his suburban Philadelphia home more than a decade ago, "I don't hear her say anything. And I don't feel her say anything. And so I continue and I go into the area that is somewhere between permission and rejection."

Cosby testified in 2005 as part of a lawsuit brought against him by Constand, who said in court this week that she rejected Cosby's advances and would have fought him off again during the January 2004 encounter had the pills not left her paralyzed and semi-conscious.

Cosby eventually settled the case for an undisclosed sum, and his deposition was sealed for years, until a judge released parts of it in 2015 at the request of The Associated Press.

A portion of it was read aloud by a detective Thursday afternoon, with more expected on Friday, including Cosby talking about giving quaaludes and alcohol to women he wanted to have sex with.

Cosby, 79, could spend the rest of his life in prison if convicted of drugging and molesting Constand, a former employee of Temple University's women's basketball program. He has said the sexual encounter was consensual.

Constand, 44, testified this week that Cosby penetrated her with his fingers against her will after giving her pills that left her so limp that she was unable to push him away or tell him to stop.

Cosby, who said recently that he did not intend to testify at his trial, showed little reaction as the deposition was read.

In his testimony, he said he gave Constand three half-tablets of the cold and allergy medicine Benadryl before the "petting" began. Prosecutors have suggested he drugged her with something stronger, perhaps the quaaludes he admitted obtaining decades ago.

It was the unsealing of the deposition that spurred Pennsylvania prosecutors to reopen their investigation and let loose a flood of similar allegations from dozens of women that all but destroyed his nice-guy image from "The Cosby Show" as America's Dad.

Prosecutors on Thursday also read into the record Cosby's 2005 statement to police , in which he gave a similar account of the night in question, saying he gave Constand the Benadryl to help her relax.

Also Thursday, a detective testified that Bruce Castor, the district attorney who decided more than a decade ago not to bring charges against Cosby, shut the investigation down in 2005 while police were still working the case.

"We had been discussing investigative leads and where they were going," Cheltenham police Sgt. Richard Schaffer, a witness for the prosecution, said on Day 4 of Cosby's trial.

Schaffer's testimony could blunt efforts by Cosby's lawyers to exploit the fact that Castor saw no case. Castor, who has long been out of office, is on the list of potential witnesses at the trial.

Castor ended the investigation after four weeks, announcing that Cosby would not be charged because the evidence had shown both parties "could be held in less than a flattering light." He said he was concerned that Constand had stayed in touch with Cosby and waited a year to call police. It was a new set of prosecutors that brought charges against Cosby in 2015.

Castor testified last year that he had talked with Cosby's lawyer before making his decision and that it was intended to let Cosby speak freely at a potential civil deposition -- the same deposition that prosecutors started reading parts of in court Thursday.

Some 60 women have come forward to say Cosby sexually violated them, but the statute of limitations for prosecution had run out in nearly every case. Constand's case is the only one in which Cosby has been charged.

The Associated Press does not typically identify people who say they are victims of sexual assault unless they grant permission, which Constand has done.

For more on Cosby, including trial updates, historical photos, videos and an audio series exploring the case, visit: http://www.apnews.com/tag/CosbyonTrial