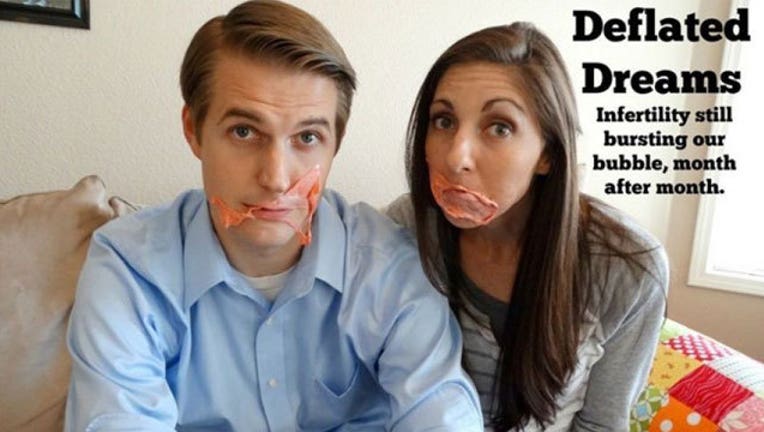 A newscaster in Idaho and his wife are making headlines for their honest “infertility announcements” that have gone viral online.

A spoof of fertile couples’ pregnancy announcements, Spencer Blake and his wife, Whitney, posted a handful of photos on their blog, On an Adventure, including a photo of popped bubblegum on their faces, with the text overlay “Infertility still bursting our bubble, month after month.” The couple, who struggled with infertility but now have two adopted sons, told Fox 9 the images were a way to make light of something that so many aspiring parents struggle with.

"It was just kind of our unique twist to something we see all the time on social media," Whitney told Fox 9.

According to the Centers for Disease Control and Prevention (CDC), 6.7 million, or nearly 11 percent, of women in the United States, are infertile. Typically thought of as just a women’s problem, infertility can also be attributed to the man’s health problems. Studies suggest irregular menstrual cycles can be a risk factor for infertility among women, but lifestyle choices for both men and women, as well as sperm issues among men, can affect a couple’s chances of conceiving.

“Sympathy and empathy go a long way for something that’s that difficult,” Spencer, a newscaster on “Good Morning Idaho,” told Fox 9. “We’ve had times where we’ve received it, so it’s nice if we can give that to other people.”

As media have picked up the couple’s story, men and women who can relate to the Blakes’ plight have commented on their viral photos, and praised the husband and wife for their bravery.

Another set of photos on the couple’s blog has a photo of them in the kitchen, next to the oven, with the text “We spent all the dough…” and “…still no bun in the oven” with Spencer hunched over in a white chef’s hat and an apron-clad Whitney tugging at her hair.

“Absolutely HYSTERICAL! LOVE them!” one commenter wrote on their May 10 blog post. “My husband and I also have been through all the ups & downs and the emotional roller coaster of infertility. Sharing and laughing are the only ways went gotten through also. Thanks for sharing! God bless your family!”