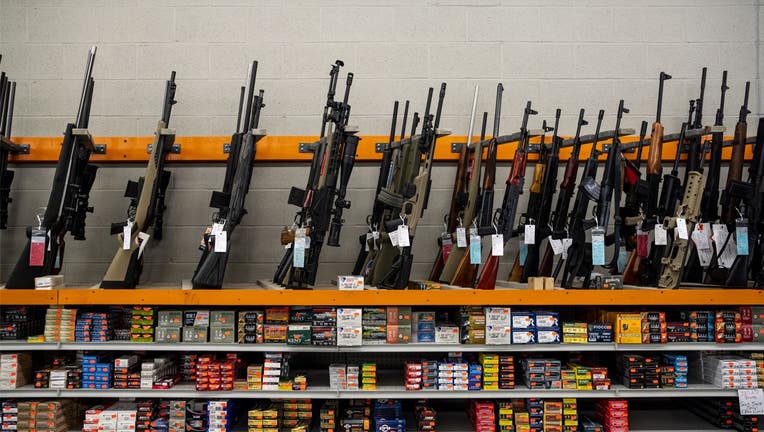 Rifles and ammunition for sale at Knob Creek Gun Range in West Point, Kentucky, U.S., on Thursday, July 22, 2021. Firearm sales have reached a near-record pace of well over 1 million a month, according to Small Arms Analytics & Forecasting. Photo

LOS ANGELES - A U.S. appeals court ruled Wednesday that California’s ban on the sale of semiautomatic weapons to adults under 21 is unconstitutional.

In a 2-1 ruling, a panel of the San Francisco-based 9th U.S. Circuit Court of Appeals said Wednesday the law violates the 2nd Amendment right to bear arms and a San Diego judge should have blocked what it called "an almost total ban on semiautomatic centerfire rifles" for young adults. "America would not exist without the heroism of the young adults who fought and died in our revolutionary army," Judge Ryan Nelson wrote. "Today we reaffirm that our Constitution still protects the right that enabled their sacrifice: the right of young adults to keep and bear arms."

The Firearms Policy Coalition, which brought the case, says the ruling makes them optimistic other age-based gun bans will be overturned.

The ruling was not a total victory for gun rights advocates, who had sought to block the state from requiring a hunting license for purchases of rifles or shotguns by adults under 21 who are not in the military or law enforcement.

The court ruled the license requirement was reasonable for increasing public safety through "sensible firearm control."

Handgun sales to those under 21 were already prohibited, but the stricter age limits for rifles and shotguns were passed in 2018 after some of the nation’s worst mass shootings were committed by young adults using rifles, including the Valentine’s Day 2018 slayings at Marjory Stoneman Douglas High School in Parkland, Florida.