New coronavirus cases are again surging in the United States, including in rural areas across the Midwest and Great Plains, with several states reporting new records in single-day case increases. Experts fear the cold weather sending more people inside could only exacerbate the spike.

Overall, more than 20 states have experienced a growth in new cases over the past two weeks, according to data compiled Oct. 15 by Johns Hopkins University. Nearly 8 million Americans had tested positive for COVID-19 as of Oct. 15, and more than 217,000 people had died.

North Dakota, South Dakota, Montana and Wisconsin lead the country in new cases per capita over the last seven days, CDC data shows. Other states, including Kansas, Nebraska, Idaho and Iowa, were also seeing a growth in new cases. 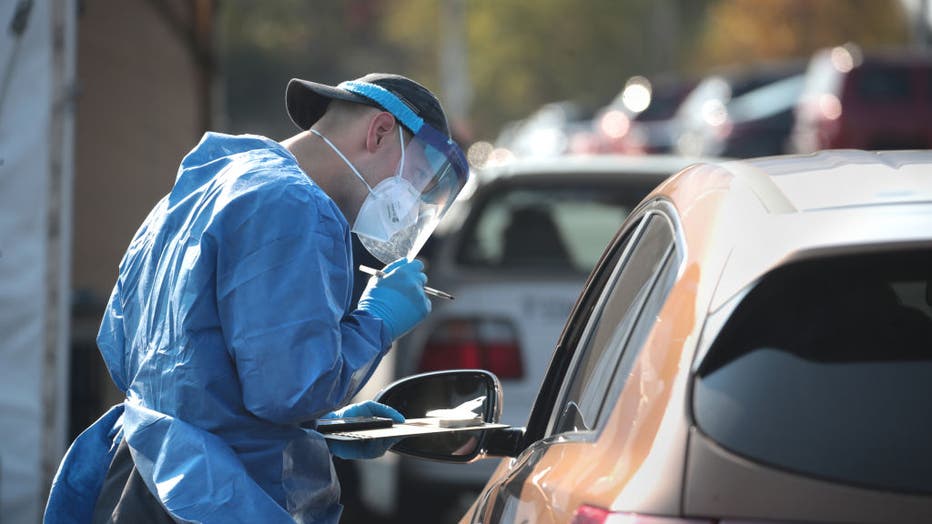 Members of the Wisconsin National Guard test residents for COVID-19 at a temporary test facility set up in the parking lot of the UMOS corporate headquarters on Oct. 9, 2020 in Milwaukee, Wisconsin. (Photo by Scott Olson/Getty Images)

Over the past seven days, the country has averaged more than 50,000 new daily virus cases, data compiled Oct. 14 by the CDC shows. The agency said that’s a 14% increase in new cases compared to the previous week.

Last week, Kansas reported more than 700 cases per day — the state’s highest average number of COVID-19 cases per day in a single week since the pandemic began.

“Many Kansans have worn masks, social distanced, and avoided mass gatherings this year. I appreciate your commitment to keeping your neighbors safe and our economy open. But now is not the time to let up,” Gov. Laura Kelly said of the spike.

Other states reported single-day record highs on Thursday, including 2,532 new COVID-19 cases in North Carolina and 4,015 new cases in Illinois.

While testing is more widespread than it was in April, experts say the resurgence can be seen in the test positivity rate and the number of hospitalizations. The test positivity rate is an important indicator because it can provide insights into whether a community is conducting enough testing to find cases, according Johns Hopkins University.

The World Health Organization has said countries that are conducting extensive testing for COVID-19 should remain at 5% or lower for at least 14 days.

Across the U.S., test positivity averaged 5.1% over the past week, according to Johns Hopkins data. But several states show a percentage above 10%, including Kansas, Montana, Nebraska, Nevada, South Dakota, Wisconsin and Wyoming.

Dr. Anthony Fauci, the nation's top infectious disease expert, said this week at an event hosted by the College of American Pathologists that the higher percentage in some states is “highly predictive of a resurgence of cases, which historically we know leads to an increase in hospitalizations and then ultimately an increase in deaths," according to a transcript by CNN.

As U.S. daily cases rise, hospitalization numbers are following the trend, according to data from the COVID Tracking Project. As of Oct. 14, there were more than 37,000 people hospitalized with the virus — the highest count since late August.

Health experts have sounded the alarm about the potential for upward trends to continue this winter, as people spend more time indoors and plan social gatherings around the holidays.

CDC Director Robert Redfield warned governors on a call this week that small gatherings are increasingly becoming a source of COVID-19 infection around the U.S., according to audio obtained by CNN.

“What we're seeing as the increasing threat right now is actually acquisition of infection through small household gatherings," Redfield said. "Particularly with Thanksgiving coming up, we think it's really important to stress the vigilance of these continued mitigation steps in the household setting."

Ohio Gov. Mike DeWine, whose state also reported record new cases in one day this week, warned of “a tough winter ahead.”

“Things will get better, but in all likelihood, things will get worse before they get better. This virus is sneaky and cunning and won’t give up. It has a mind of its own,” DeWine wrote on Twitter.

“We must remember - we can control and mitigate a lot of this. We have done it before. We can do it again,” DeWine added.

RELATED: 'You may have to bite the bullet': Dr. Fauci cautions against large Thanksgiving gatherings