President Joe Biden on May 26 ordered U.S. intelligence officials to redouble their efforts to investigate the origins of COVID-19, including any possibility that the virus may have emerged from a Chinese laboratory.

WASHINGTON - Dr. Anthony Fauci, the U.S. government's top infectious disease expert, believes China should release any medical records that could help resolve the debate surrounding where the COVID-19 pandemic originated, according to an interview he did with the Financial Times on Friday.

Back in February, the World Health Organization visited the Wuhan Institute of Virology, which has been the subject of speculation surrounding the origin of COVID-19.

The medical records Fauci points to concern three researchers at the Wuhan institute "who reportedly became sick in November 2019, and six miners who fell ill after entering a bat cave in 2012," according to the Financial Times.

The researchers from the Wuhan institute were collecting bat samples from inside the cave and three of the six miners ended up dying, the Financial Times reported. 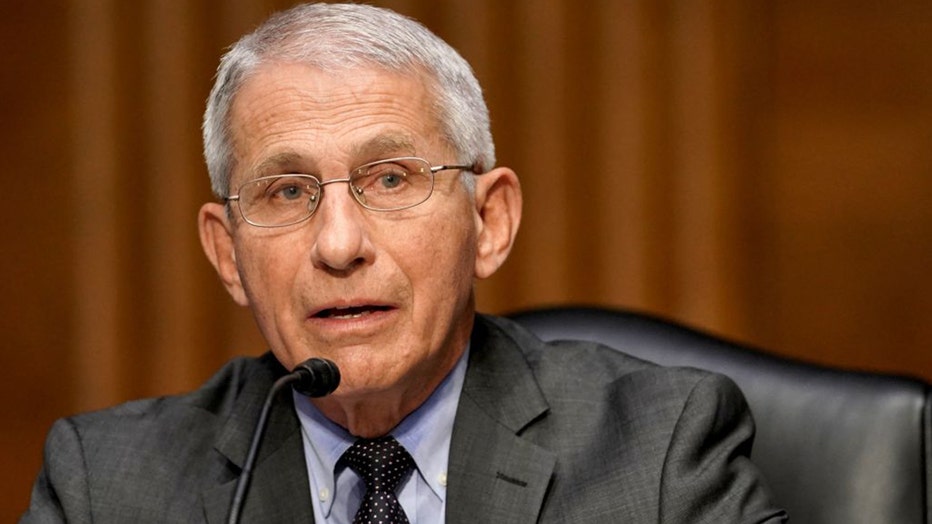 FILE - Dr. Anthony Fauci, director of the National Institute of Allergy and Infectious Diseases, speaks during a Senate Health, Education, Labor and Pensions Committee hearing to discuss the on-going federal response to Covid-19 on May 11, 2021.

The virology institute in Wuhan is one of China’s top virus research labs. It built an archive of genetic information about bat coronaviruses after the 2003 outbreak of Severe Acute Respiratory Syndrome, or SARS.

Shi Zhengli is a renowned virologist, best known for her work with bat coronaviruses at the Wuhan Institute of Virology. She discovered the natural bat reservoir for the SARS pathogen that spread in southern China from 2002 to 2003.

Rumors in mid-April of 2020 claimed that Shi had been "muzzled" by the government following the initial outbreak.

Shi has been under heavy scrutiny amid concerns that the virus had originated from the Wuhan lab. On Feb. 2, 2020, Shi posted that "I promise with my life that the virus has nothing to do with the lab" in a response to an article about the pandemic's origins.

Despite Shi’s claims denying her lab had anything to do with the outbreak, Fauci said he believes further investigations are warranted.

"I would like to see the medical records of the three people who are reported to have got sick in 2019," Fauci told the Financial Times. "Did they really get sick, and if so, what did they get sick with? The same with the miners who got ill years ago... What do the medical records of those people say? Was there [a] virus in those people? What was it? It is entirely conceivable that the origins of Sars-CoV-2 was in that cave and either started spreading naturally or went through the lab."

Fauci’s position comes after President Joe Biden asked U.S. intelligence agencies in May to "redouble" their efforts to investigate the origins of COVID-19.

The Biden administration joined in on worldwide pressure for China to be more open about the outbreak, aiming to head off complaints that the president has not been tough enough as well as to use the opportunity to press China on alleged obstruction.

RELATED: COVID-19 death toll could be 2 to 3 times higher than recorded, WHO reports

Some critics, including former President Donald Trump, have promoted the theory that the virus emerged from a laboratory accident rather than naturally through human contact with an infected animal in Wuhan, China.

Biden in a statement said the majority of the intelligence community had "coalesced" around those two scenarios but "do not believe there is sufficient information to assess one to be more likely than the other." He revealed that two agencies lean toward the animal link and "one leans more toward" the lab theory, "each with low or moderate confidence."

"The United States will also keep working with like-minded partners around the world to press China to participate in a full, transparent, evidence-based international investigation and to provide access to all relevant data and evidence," said Biden.