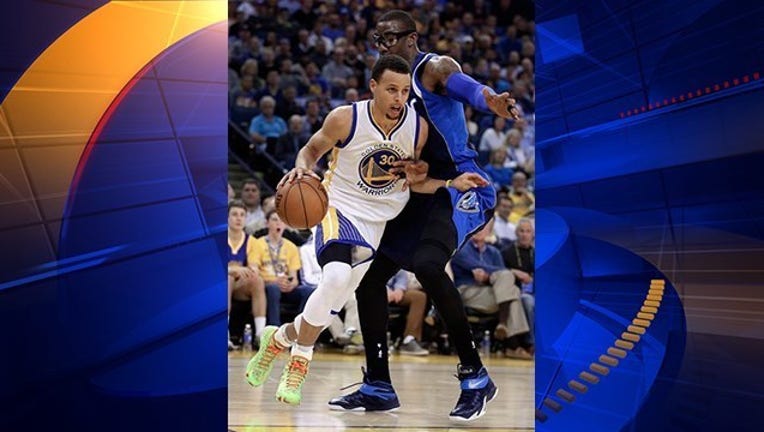 Curry wasn't as dominant as he was earlier this year when he scored a season-high 51 points against the Mavericks, but Golden State's All-Star point guard was still effective. He scored 16 points in the first half when the Warriors (48-12) began to pull away and finished with five of his team's 11 3-pointers.

Draymond Green added 18 points and nine rebounds, and Shaun Livingston had 10 points and 10 rebounds off the bench for Golden State.

The West-leading Warriors have won 48 games in back-to-back seasons for only the second time in franchise history.

Rajon Rondo had 14 points and six assists for Dallas.

The Mavericks (40-24) didn't have Rondo when Curry torched the Mavs in February, though it hardly mattered. Rondo struggled keeping up with the quicker Curry and had trouble fighting through Golden State's multiple screens.

Even when Dallas closed out to stifle Curry, he kept the Warriors rolling by finding teammates cutting the lane or waiting to shoot from the perimeter.

Golden State led by as much as 27 in the fourth quarter, then coasted to its NBA-leading 34th double-digit win.

Dallas, playing the second half of a back-to-back, couldn't keep up. The Mavs did early, but ran out of gas down the stretch.

They also lost their cool a few times. Dirk Nowitzki and Tyson Chandler were hit with technical fouls, both for arguing foul calls.

Curry scored Golden State's first eight points. He also went 4 of 7 from beyond the arc in the first half to help the Warriors to a 52-40 lead at the break.

The Warriors pushed their lead to 74-55 on Thompson's baseline drive midway through the third.