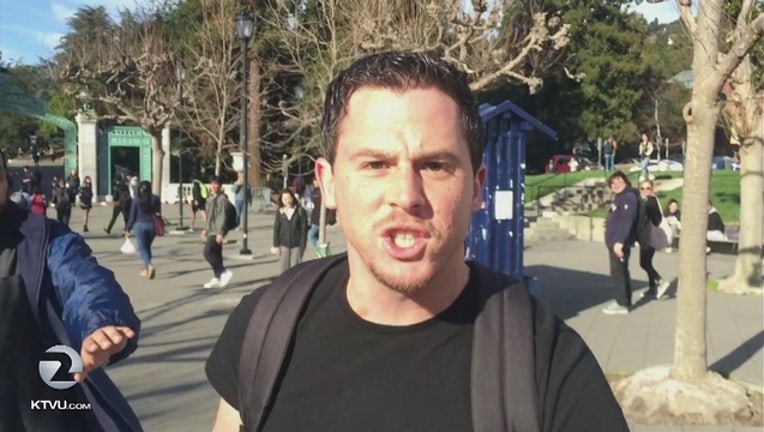 Zachary Greenberg, 28, is charged with assault with force likely to produce great bodily injury, battery with serious bodily injury and criminal threats for his alleged attack on Hayden Williams, an organizer with the conservative group Turning Point USA, while Williams was manning a table at Sproul Plaza on Feb. 19.

Greenberg, who was arrested Friday but is now free on bail, also is charged with misdemeanor vandalism causing less than $400 in damage.  He's scheduled to be arraigned at the Wiley Manuel Courthouse in Oakland at 9 a.m. Wednesday.

UC police said that on Feb. 19, Williams was "tabling" for Turning Point when two men approached him, an argument started and a physical confrontation ensued when one of the two men slapped the phone out of the victim's hand.

Police said the suspect, later identified as Greenberg, then knocked over the table Williams was at and the two men struggled over the phone.

During the struggle, Greenberg allegedly punched Williams several times, causing injuries to his eye and nose, according to police.  Videos of the incident went viral after being shared by conservative groups who alleged that the assault was a leftist attack on students' free speech.

However, UC Berkeley has said Williams and Greenberg aren't students at the school.

President Donald Trump took note of the incident and brought Williams onstage at the Conservative Political Action Conference on Saturday and encouraged him to sue UC Berkeley and the state of California.

UC Berkeley issued a statement on Sunday saying that much of the reporting and commentary on the case is "willfully distorted and inaccurate."   The university said critics who alleged that the delay in
arresting and charging Greenberg was due to the imputed political beliefs of the campus administration "willfully impugned the integrity and independence of the excellent officers of the UC police, who seek to uphold the law regardless of who the perpetrators are, or what they happen to believe in."

UC Berkeley also said allegations that it doesn't support free speech for all of its students, regardless of their perspectives, are "absurd" and "have no basis in fact."

The university said that in the last year alone it has spent more than $4 million "to ensure that our conservative students could safely and successfully hold events on campus and invite speakers of their choice to these events."

UC Berkeley said, "Our commitment to freedom of speech and belief is unwavering and no amount of incomplete, distorted news coverage is going to change that."