Dead fish washing up in Lake Merritt and parts of bay

Thousands of fish and other sea life are dying in the Bay Area. Experts say warm water, sunlight, lack of nutrients and rain water are contributing factors to the "big bloom" leading to the deaths.

For days, the toxic problem has gotten worse as scientists try to figure out what specific conditions may have triggered the fish kills.

"This is unprecedented," said senior scientist Jon Rosenfield with San Francisco Baykeeper. "That’s a sign that something is very wrong in our ecosystem and it suggests that we need to respond with some urgency."

Regular monitoring of the die-offs and water quality is ongoing, but it’s unclear what may have caused this algae bloom to spread so quickly.

Warm water, sunlight, lack of rain and nutrients from wastewater could all be contributing factors to the bloom, according to Rosenfield.

"That treated sewage has high levels of nitrogen and phosphorus compounds in it," he said. "That’s fertilizer for these algae."

Experts say the algae uses more oxygen as it grows and expands, essentially suffocating the fish if conditions are just right. 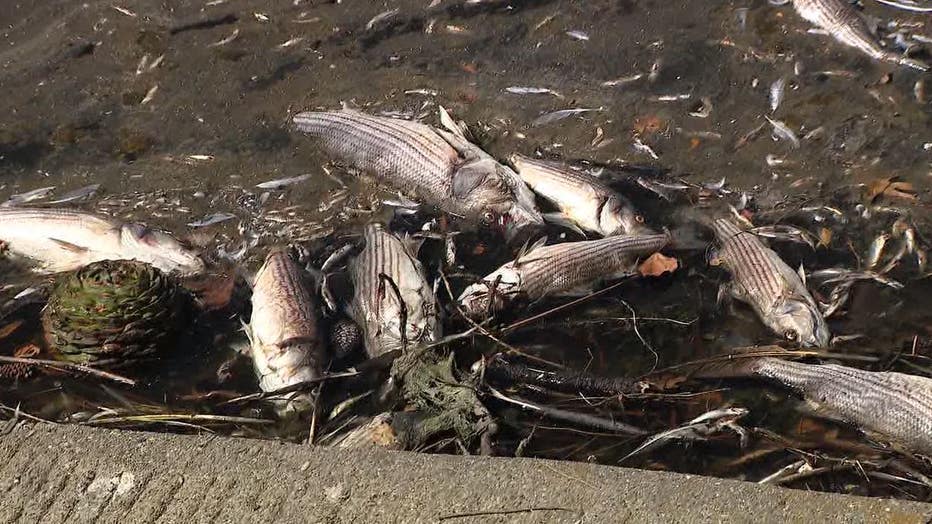 But the effects have been dire, including dead sharks, bat rays, sturgeon and other marine life, stretching from Santa Clara and San Mateo counties north beyond Marin County.

More than a month ago, many reported muddy and murky water in the Oakland Estuary, concerned for fish and wildlife.

"Right now we have no birds here," said Thomas Charron who has lived on the Alameda side of the estuary for nearly three decades. "This is very unusual."

He quickly noticed over the weekend a large number of small, silvery fish washing up by the hundreds.

Dead fish washing up in Lake Merritt and parts of bay

Thousands of fish and other sea life are dying in the Bay Area. Experts say warm water, sunlight, lack of nutrients and rain water are contributing factors to the "big bloom" leading to the deaths.

The stunning sight has also created a stinky smell, especially at Lake Merritt, where large fish piled up on the shore by the thousands this week.

The city of Oakland hired contractors who spent all day Wednesday scooping up and bagging the dead fish. One worker says 28 oversized drums were packed full of rotting fish both big and small.

"We’re working with contractors to get it cleaned up as fast as possible," said Sean Maher with Oakland Public Works.

While a lack of oxygen is suspected of causing the die-offs, excess wastewater may be making it worse.

The city did repair two fountains that help pump oxygen into the lake, but it’s not expected to make a difference or prevent additional fish kills.

"The only way we can get control of this problem is to reduce the amount of nutrients that we’re pouring into the Bay," Rosenfield said.

Nonprofit groups along with state and regional agencies have been studying the problem for years to better understand what’s happening. 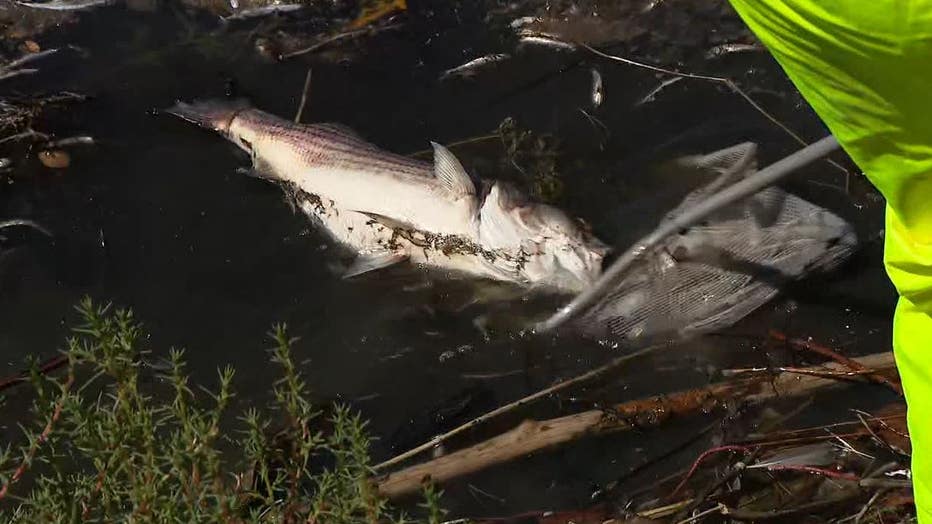 The San Francisco Regional Water Quality Control Board said it is discussing, if necessary, new requirements for sewage treatment, if it proves to prevent future blooms.

But it comes with a warning.

"We don’t take that decision lightly," Executive Officer Eileen White said. "We want to make sure it’s based on sound science because for the wastewater utilities in the Bay Area to have to treat nutrients is very expensive. It would cost billions of dollars."

That would means a rise in residents’ sewage bills to pay for those increased costs.

For now, it’s a wait and watch approach to identify patterns and allow nature to take its course. The algae blooms could last for weeks, especially with the heat wave anticipated for the weekend.