The murky and muddy mystery about what's in the Oakland Estuary water has been solved. Tests show harmful algae blooms or "red tides" are present in the estuary, as well as the Bay side of Alameda, and in Lake Merritt.

OAKLAND, Calif. - People and pets are urged to stay out of the Oakland Estuary and away from Alameda’s shoreline after potentially harmful algae blooms were discovered, following several water tests.

For weeks, the water has looked muddy and murky, prompting those who live on or near the water to question the unusual, dark brown color.

"It’s so thick, it looks like just when you’re stirring up your hot chocolate or something," said Michael West who lives on the Oakland Estuary. "Whatever it is, you wouldn’t want to find it in your refrigerator."

At times, a green slime or sludge appears near the surface of the water.

Water samples were taken by several agencies following KTVU’s questions and reports about the water quality. 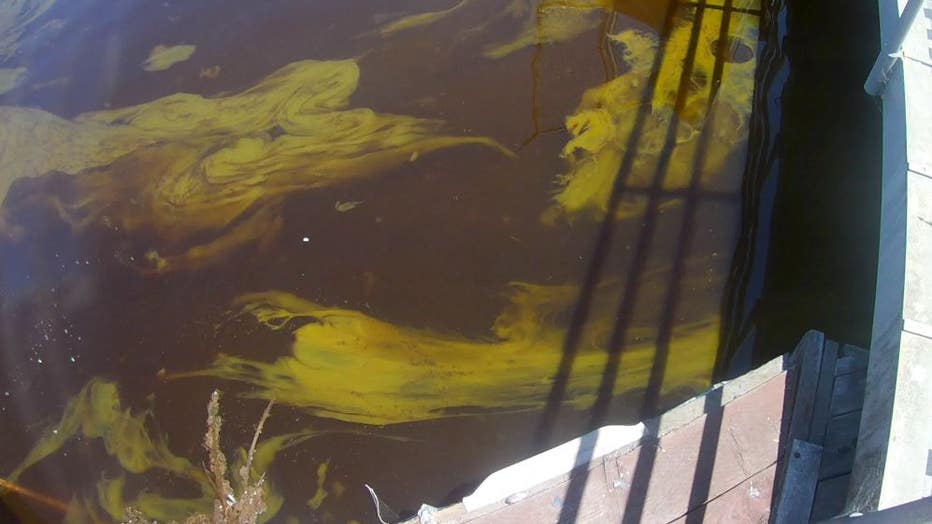 While there isn’t a huge risk to humans if they come in contact with it, water and health officials said it could cause skin irritation, rashes, and burning eyes. The algae and tainted water is also considered harmful to pets, especially dogs.

"It’s a naturally occurring phenomena and a lot of it is probably related to climate change," said Eileen White, executive officers of the regional water board. "We’ve had the driest January through March on record. We’re in the middle of a drought, and it’s summertime so it’s not uncommon to see these algae blooms."

It is highly recommended that people and their pets stay out of the water until the blooms dissipate.

But the algae problem persists beyond just the Oakland Estuary.

For more than three decades, Jeff Frankel and his wife have lived on the San Francisco Bay side of Alameda, in the Ballena Bay community who said they’ve never seen anything like this.

"It’s sort of baby poop brown and with about six inches of visibility," Frankel said. "I’m very disappointed I can’t be swimming right now because of this."

Test results show the harmful algae blooms known as "red tides" is there, too.

Officials said the algae is toxic to fish and aquatic life, accounting for some changes neighbors are seeing including fewer fish.

"All of the birds that eat fish are gone," Frankel said. "The only birds that are left are pigeons."

For now, scientists and water quality experts say the only solution is to let nature take its course, which could take several days, weeks, or longer.

"This has manifested because it produced cysts that are in a resting stage and the germination of these cysts can lead to blooms," White said. "They can be transported by tides and currents and that’s what looks like has happened."

Several agencies report the harmful algae appearing on both sides of Alameda, in the Oakland Estuary, and in Oakland’s Lake Merritt, which connects to the estuary. Warning signs have already been posted around Lake Merritt to deter people and animals from going near the water.

The water board said there is an ongoing collaboration among government agencies, environmental groups, and utilities to fund scientific studies aimed to better understand what causes these red tides. Additionally, there are efforts to determine what if anything can be done to prevent the water from becoming harmful.

"I’d love to get back in the water as soon as it’s clean," Frankel said. "I’d like that to happen as soon as possible."