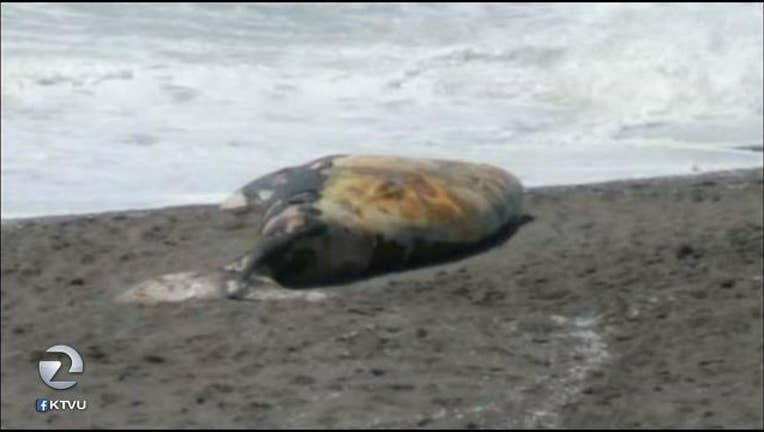 A young, 28 foot gray whale washed up on Portuguese Beach, between Jenner and Bodega Bay.

"It does seem we have a spate of whale mortalities washing up on various beaches," Mary Jane Schramm told KTVU. Schramm is with the Gulf of the Farallones National Marine Sanctuary.

"The fact that we're seeing so many in such a small geographic area is setting off some alarms," she acknowledged.

From Fort Bragg to Santa Cruz, at least eight dead whales have been discovered during the past two months.

They are different species, with differing causes of death, but the spike has experts intrigued.

"At this point we're not seeing any one unifying principle giving us an indication there's one thing that's causing it," observed Schramm.

The deceased whales include a forty foot long gray whale found rolling in the surf off Half Moon Bay, and another gray stranded off the Mendocino coast as well. Pacific gray whales are the most common in the region.

"They have not fed appreciably since they left Arctic waters last fall, so they're on an empty tank of gas," explained Schramm, describing how gray whales are finishing their annual migration from Alaska to Mexico and back.

"When they are underweight and malnourished, that can open up a whole array of malnutrition related diseases," she added.

Ship strikes are a common cause of death, and since the body of a 42 foot humpback found in Pacifica had blunt force trauma, she likely collided with a ship.

A 48 foot sperm whale, also found in Pacifica, is believed to have died of old age based on the amount of wear on its teeth.

And one of two gray whales found in Santa Cruz last month, was apparently killed by an orca. It had killer whale teeth marks on its body.

Many of the scientists who would be analyzing the whale deaths have shifted their attention to Santa Barbara, where an oil spill is affecting marine life.

It's estimated that for every one whale that's washed up, ten others die at sea and are not discovered.

This season's spate of deaths, then, may simply be a case of more whales than usual washing up in populated areas.