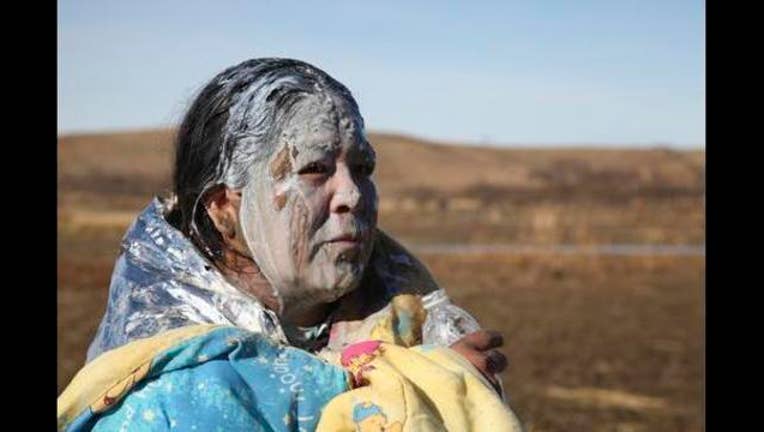 Tonya Stands recovers after being pepper sprayed by police with other protesters hoping to build a new camp to block construction of the Dakota Access Pipeline, near Cannon Ball, N.D., Wednesday, Nov. 2, 2016.(AP Photo/John L. Mone)

The camp has existed since August and at times has housed thousands of people who supported the concerns of Sioux nations that the $3.8 billion pipeline to carry North Dakota oil through the Dakotas and Iowa to a shipping point in Illinois threatens the environment and sacred sites. Dallas-based developer Energy Transfer Partners disputes those claims.

With flooding expected this spring, the Corps on Feb. 3 told the few hundred people remaining in camp that they must take their possessions and leave by 2 p.m. Wednesday.

Camp leader Phyllis Young said rain Monday hampered that effort, and that Native Americans also took time out for traditional ceremonies related to the weather. Frozen ground also is making it difficult for people to remove tent stakes, she said.

Corps Capt. Ryan Hignight confirmed that people in camp sought an extension on the deadline to move. But he said the Corps is focused on people's safety and on the environment.

A schedule for emptying the camp, released late Wednesday, calls for the first bus to arrive at 9 a.m. to take those willing to leave to a "transition center" in Bismarck to get a change of clothes, medical screening and hotel and bus vouchers.

The schedule's entry for 2 p.m. says: "Certain individuals in the camps would like to experience a ceremonial arrest which will occur at this time."