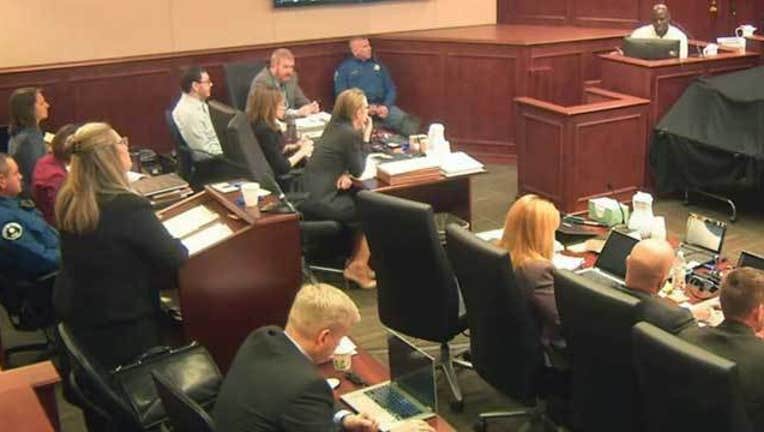 CENTENNIAL, Colo. (AP) — The defense in the Colorado theater shooting trial rested its case Friday after trying to show James Holmes was legally insane when he carried out the deadly 2012 attack, suffering from delusions that each person he killed would increase his self-worth.

Holmes' public defenders presented two weeks of testimony that featured a pair of psychiatrists who examined the gunman and found he was insane.

Earlier in the trial, two court-appointed doctors testified for the prosecution that they concluded Holmes knew the difference between right and wrong at the time of the killings and therefore was sane under Colorado law.

The defense highlighted Holmes' sometimes bizarre behavior after the shooting — from playing with paper bags put over his hands to preserve gunshot residue, to running into walls head first four months after the massacre.

Holmes' lawyers contended from the start that he was in the grips of a psychotic episode when he killed 12 people and injured 70 at a Denver-area movie theater.

Their task was to raise reasonable doubt over whether Holmes was sane and show he should not be held accountable for his actions because of his depleted mental state.

In Colorado, prosecutors have the burden of proof in insanity cases. Most states and the federal system place that burden on defendants.

The defense made its largely clinical case in about a quarter of the time that prosecutors took to present emotional and sometimes gruesome testimony from shooting survivors and investigators, which included photos of wounds and video of carnage inside the theater.

Its star witness, schizophrenia expert Dr. Raquel Gur, said Holmes showed signs of schizophrenia even before he began post-graduate neuroscience studies in Colorado in 2011, and that he was emotionless in 28 hours of interviews over two years.

Holmes' psychosis rendered him incapable of knowing right from wrong at the time of the shooting, she declared flatly.

Gur, head of neuropsychiatry at the University of Pennsylvania medical school, said Holmes still suffers bizarre delusions that preoccupied him before the shooting, including his belief that killing others would increase his own self-worth.

Holmes' attorneys also referenced a family history of disorders, including an aunt of Holmes who had schizophrenia and a grandfather who was institutionalized.

Holmes did not take the stand during the 2 ½ month trial. When asked by Judge Carlos A. Samour whether he would Thursday, Holmes replied "I choose not to testify" in a clear, firm voice.