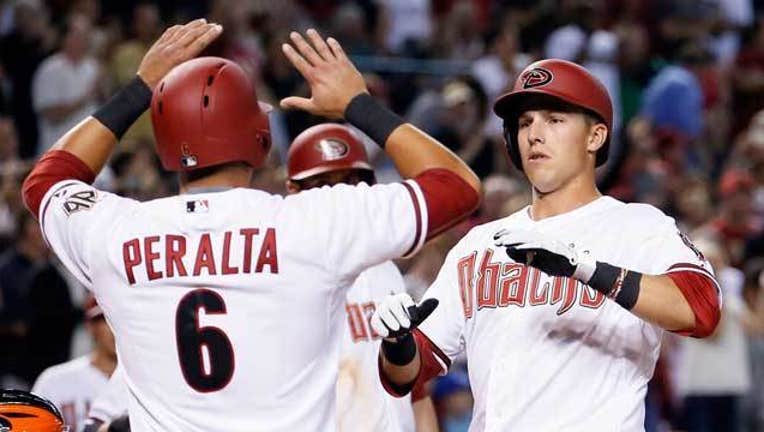 PHOENIX (AP) — Jake Lamb and David Peralta each hit three-run homers to power the Arizona Diamondbacks to a 7-6 win over the San Francisco Giants on Tuesday night.

All seven runs were charged to Giants starter Ryan Vogelsong, who allowed six hits in 4 2-3 innings. He walked four and struck out five.

Buster Posey and Brandon Crawford homered for the Giants. Posey had a two-run shot in the first inning off Diamondbacks starter Rubby De La Rosa, who allowed six runs and eight hits in 5 1-3 innings.

The Diamondbacks' Paul Goldschmidt went 2 for 2, walked twice and stole a base.

The Giants tied the game on Brandon Belt's RBI single in the fourth and Joe Panik's sac fly in the fifth before Lamb's homer in the bottom of the inning made it 7-4.

Crawford's homer in the sixth cut it to 7-5 and Hector Sanchez added an RBI double to make it a one-run game.

De La Rosa, making his Diamondbacks debut after being acquired in a trade with Boston in the offseason, earned the win.

The Diamondbacks' bullpen combined for 3 2-3 scoreless innings. And Addison Reed earned a save with two strikeouts in the ninth.

GONZALEZ TO BE HONORED:

Former Diamondbacks star Luis Gonzalez will be inducted into the Arizona Sports Hall of Fame in a ceremony on Wednesday. Gonzalez, a star of the 2001 Diamondbacks' championship season, is in his sixth season as special assistant to the president and chief executive officer of the club. He spent 19 seasons in the major leagues and leads the Arizona in games, home runs and RBIs.

Giants: Starting pitcher Matt Cain was placed on the 15-day disabled list before Tuesday's game with a right forearm injury, and will miss his scheduled start on Wednesday. He could be out another two or three weeks. ... Another starter, Jake Peavy, was scheduled for a bullpen session before Tuesday's game as he deals with a back problem. Peavy is in line to start on Sunday at San Diego if he is cleared by medical staff. ... Belt left the game with one out in the bottom of the fourth inning. He suffered a strained groin, it was later announced, and was replaced by Joaquin Arias.

Giants: Right-hander Chris Heston, called up from Triple-A Reno before Tuesday's game, gets the call against Arizona on Wednesday night. Heston appeared in three games for the Giants last season.

Diamondbacks: Jeremy Hellickson makes his Diamondbacks debut on Wednesday after arriving in a trade with Tampa Bay in the offseason. He has never faced the Giants in the regular season.