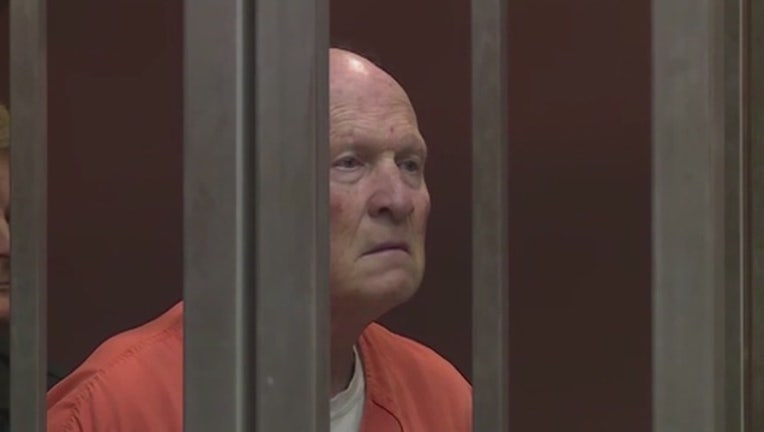 TULARE, Calif. (AP) - The man accused of being California's Golden State Killer has been cleared of involvement in the 1975 murder of a 14-year-old girl in the Central Valley, prosecutors said Tuesday.

DNA testing excluded Joseph DeAngelo as a suspect in the murder of Donna Jo Richmond and - along with other evidence - indicates that another man was rightfully convicted of the slaying, according to a conviction review.

The girl vanished on Dec. 26, 1975 while bicycling from a friend's house to her home near Exeter. Her body was later found in an orange grove. She had been strangled, beaten and stabbed 17 times.

A convicted sex offender, Oscar Clifton, was convicted of kidnapping, attempted rape and murder. He was sentenced to life in prison and died there in 2013.

DeAngelo has been charged with 26 counts of murder and kidnapping. Prosecutors believe that he killed 13 people and raped dozens of others in six California counties in the 1970s and 1980s. The rape cases happened too long ago to be prosecuted, so prosecutors brought 13 related kidnapping counts. He is on trial in Sacramento County but hasn't entered a plea.

Among other killings, DeAngelo is charged with the murder of a college professor who was shot in 1975 at his Visalia home by an intruder who tried to kidnap his teenage daughter. Visalia is only about a dozen miles from Exeter.

DeAngelo also had been a police officer in Exeter in the 1970s. His arrest last year prompted prosecutors to review the Clifton conviction.

"I am again confident, just as this office was the previous times we reviewed the case, that the countless hours of report analysis, evidence evaluation, court transcripts, and DNA evaluation solidifies that Oscar Clifton tragically and violently ended the life of Donna Jo Richmond in an orange grove the day after Christmas in 1975," District Attorney Tim Ward said in a statement.

The conviction review said a partial DNA profile, developed from semen on the teenager's body, was consistent with Clifton's profile but not that of DeAngelo.

The review also noted that Clifton's invoice book was found near the girl's abandoned bicycle and that items of the girl's clothing were found along the road leading to his home and on a side road. The review also mentioned trial testimony that shortly before the killing, Clifton had made crude sexual remarks to another 14-year-old girl and had exposed himself to a woman. He was convicted of child molestation and indecent exposure for those crimes.