The surgical masks that most people buy in response to epidemic outbreaks are not designed to seal around the mouth and nose, which means airborne germs can still come in through the sides and top.

LOS ANGELES - As more cases of the new coronavirus spring up across the globe, more people are turning to face masks for protection — but are they actually effective at keeping you healthy?

While medical professionals will often wear a face mask when dealing directly with sick patients, there isn’t any significant data to back up the idea that generally wearing a surgical face mask in day-to-day situations — on public transit, for example — has any protective benefits for wearers.

“I don’t think there’s any evidence that wearing a surgical mask has any benefit to protect someone in general from exposure, or from being infected,” Dr. Jeffrey Klausner, Professor of Medicine and Public Health at University of California, Los Angeles said. “We usually recommend people who are ill wear surgical masks to prevent transmission [to others].”

“That being said, in an epidemic setting, I think masking is a way that people can be reminded that there’s an ongoing respiratory disease epidemic,” Dr. Klausner hypothesized. “I surmise it might help people remember to wash their hands, to not shake other people’s hands, to cover their mouth when they sneeze or cough.”

“So it may be kind of an awareness tool, but in terms of its direct benefits, there’s no data,” Dr. Klausner added.

Dr. Klausner explained that the kind of surgical masks that most people wear during infectious disease outbreaks aren’t manufactured to create an effective seal around the mouth and nose, and therefor airborne germs can still come in through the sides and top of the mask. 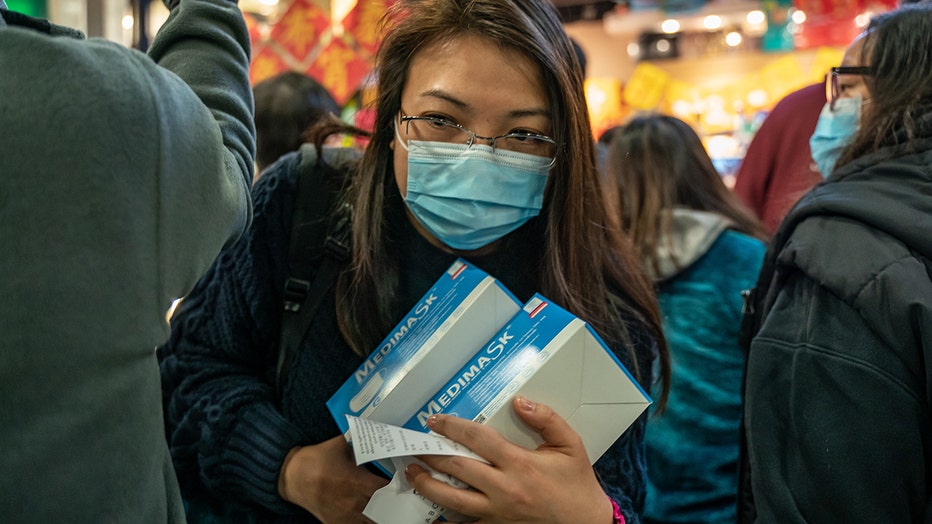 The U.S. Centers for Disease Control and Prevention takes a similar stance and recommends that those who are already sick wear a face mask when they come into contact with others to limit the spread of their own disease. If the sick person cannot wear a face mask, then people who live in the same household should wear a face mask while in the same room, the agency added. However, the CDC makes no mention of the effectiveness of generally wearing a face mask as a preventative measure.

“When someone talks, coughs, or sneezes they may release tiny drops into the air that can infect others,” says the San Francisco Department of Public Health. “If someone is ill a face mask can reduce the number of germs that the wearer releases and can protect other people from becoming sick.”

A 2008 study published in the Journal of Infectious Diseases found that masks are highly effective in preventing the spread of viral infections when used properly by people who are in close quarters with the infected. Family members of children exhibiting flu-like illnesses were 80 percent less likely to catch the illness themselves if they simply wore a face mask around the patient.

Another study published in the Annals of Internal Medicine in 2009 found that the family members of flu patients lowered their risk of becoming infected if they both washed their hands frequently and wore surgical masks.

Unlike the flu, the novel coronavirus (2019-nVoC) is not yet fully understood, and health officials aren’t entirely sure how it is transmitted.

“It’s important to note that how easily a virus spreads person-to-person can vary. Some viruses are highly contagious (like measles), while other viruses are less so,” the CDC says.“There is much more to learn about the transmissibility, severity, and other features associated with 2019-nCoV and investigations are ongoing,” the agency added. “While CDC considers this is a very serious public health threat, based on current information, the immediate health risk from 2019-nCoV to the general American public is considered low at this time.”

In response to the recent coronavirus outbreak (2019-nCoV), the CDC recommends the following preventative hygiene actions to keep yourself healthy:

While the unknown nature of a new infectious outbreak such as the 2019-nCoV can be panic-inducing, Dr. Klausner says that risk to Americans is relatively low right now. For anyone in the United States worried about getting sick, he suggests focusing preventative measures on a more prevalent threat.

“The best thing they can do is make sure they get their flu shot. While the flu shot isn’t protective against coronavirus, at this point, it’s thousands of times more likely someone will be exposed and infected with influenza than with coronavirus,” Dr. Klasuner said.

“And while the flu shot is not 100 percent effective, it is effective at preventing severe illness and preventing mortality,” he added. “Public health officials, researchers — we still strongly recommend influenza vaccination.”

Coronaviruses are a large family of viruses, and the novel strain 2019-nCoV was identified in Wuhan, Hubei Province, China at the end of last year.

The new virus causes cold- and flu-like symptoms, including cough and fever, and in more severe cases, shortness of breath and pneumonia. It is thought to have spread to people from wild animals sold at a Wuhan market. China on Sunday temporarily banned trade in wild animals and urged people to stop eating meat from them.

On Tuesday, Director-General of the World Health Organization Tedros Adhanom Ghebreyesus met with Chinese leader Xi Jinping to discuss the latest information on the outbreak and reiterate their commitment to bringing it under control, WHO said in a news release.

“The National Health Commission presented China’s strong public health capacities and resources to respond and manage respiratory disease outbreaks,” the release said.It said discussions focused on ways to cooperate to contain the virus in Wuhan and other cities and provinces and studies that could contribute to the development of medical countermeasures such as vaccines and treatments. Other WHO experts will visit China as soon as possible, it said.

“Stopping the spread of this virus both in China and globally is WHO’s highest priority,” Tedros said.

The source of the virus and the full extent of its spread are still unknown. However, WHO said most cases reported to date “have been milder, with around 20 percent of those infected experiencing severe illness.”