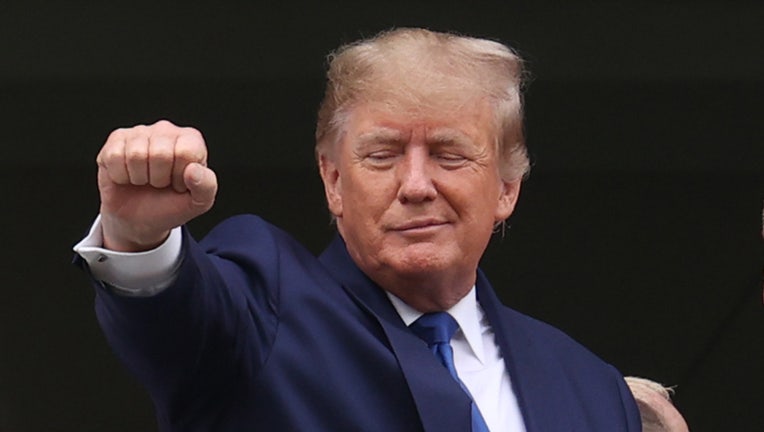 Former United States president Donald Trump acknowledges the fans from Millionaires Row before the148th running of the Kentucky Derby on May 7th, 2022, at Churchill Downs in Louisville, Kentucky. (Photo by Brian Spurlock/Icon Sportswire via Getty Ima

NEW YORK - A New York judge says he’s close to releasing Donald Trump from a contempt finding, but only if the former president meets certain conditions, including paying $110,000 in fines accrued for failing to turn over documents in a state civil investigation.

Judge Arthur Engoron said Wednesday he will conditionally lift Trump’s contempt finding if, by May 20, Trump submits additional affidavits detailing efforts to search for records and explaining his and his company’s document retention policies, a company he hired to aid the search completes its work, and he pays the fines.

The judge found Trump in contempt of court in April.

New York Attorney General Letitia James, a Democrat, had asked the court to hold Trump in contempt after he missed a March 31 court-imposed deadline to turn over documents.

Trump appealed the ruling and his lawyer said that no documents that have not previously been turned over were found in new searches.

Trump, a Republican, has been fighting James in court over her investigation, which he has called a politically motivated "witch hunt."

Trump was initially ordered to produce those documents by March 3, 2022, but OAG agreed to accommodate his request for additional time and extended the date to March 31, 2022.

The attorney general says that Trump agreed to this timeline and never sought to challenge this aspect of the order on appeal. However, on March 31, 2022, Trump raised a new round of objections to the document requests in the subpoena and stated that he would not produce any documents responsive to OAG’s subpoena.

Also Wednesday, a state appellate court is scheduled to hear oral arguments in Trump’s appeal in another subpoena matter: Engoron’s Feb. 17 ruling requiring him to answer questions under oath in James’ investigation.