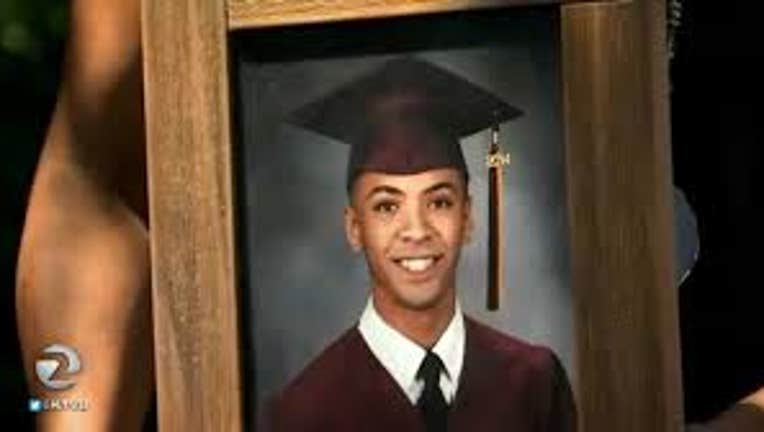 WALNUT CREEK, Calif. - Walnut Creek police officers who were called to help a family worried about the mental state of their 23-year-old son had a well-laid-out plan to address the situation that didn't involve using guns.

But they ended up breaking from their plan and shot Miles Hall to death despite their objectives, according to documents released this week under a California Public Records Act. Officers said they felt their lives were in danger when they pulled out their weapons on June 2, 2019.

Hall had been carrying a metal pole, which he wouldn't put down. The family said the pole was a gardening tool that neighbors gave him so he could pull out root vegetables alongside his grandmother. When he was in a schizophrenic state, he believed he was Jesus and the pole was a "staff of God."

The revelations underscore the tension between the danger police feel in dynamic situations and the growing cry to change the way the country handles mental health calls with a non-law enforcement response. That's because even when there are thoughtful plans and training, having guns involved can change the course of the call forever.

The release of documents also coincides with Assemblymember Rebecca Bauer-Kahan's (D-Orinda) "Miles Hall Lifeline Act," a bill that would create call centers to connect people calling or texting 988 with trained counselors and dispatch mobile crisis support teams – instead of police officers – to help a person in crisis.

"They had a plan, a good plan," said Ben Nisenbaum, a civil rights attorney who represented Hall's family. "And then they just forgot the plan. It makes no sense. It kills me that they didn't use it."

Hall's parents, Scott and Taun Hall, went a step further, saying that the officers acted recklessly and should be criminally charged. They said the police version of events is "distorted" and what their son, who was in the throes of a mental health crisis, needed that day was compassion, not lethal force.

Taun Hall said that her son was simply scared and not charging at police. If only the officers had just stepped back and let him pass through to return home, she said. He used to play football at Los Lomas High and was a pro at zig-zagging to dart way from his opponents, his family said.

Hall had no criminal history but police had been to his home before. His mother had intentionally befriended police to let them get to know her African-American son with schizoaffective tendencies when she moved to the mostly white city.

Adam Bercovici, a best practices police expert who used to be a lieutenant for the Los Angeles Police Department, does not know the particulars of Hall's case.

But in general, he said that police can't always be held to plans because: "A good plan never goes according to plan."

However, Bercovici also said that in most cases, police don't have to pull out their weapons as Plan B, either. There are many steps to try before that, he said, including in this case, where officers could have stepped back, creating a wider perimeter.

"There's nothing wrong with a tactical retreat," he said.

According to a partial release of records under the police transparency law SB 1421, the officers called to help were told by a sergeant to use less-than-lethal force including a bean bag shotgun and a Taser.

The sergeant had a rifle just in case, but she had no plan to use it, according to the documents released by Walnut Creek police.

New body camera video, just released to the public, shows the deadly encounter between a young man and Walnut Creek police. The man was shot and killed by officers on June 2nd. KTVU's Alyana Gomez reports.

On this day, Hall's grandmother had told police he was having a "mental health episode" and that he had shattered the sliding glass door and was armed with a pole, going to other homes and banging on front doors. Sgt. Holley Connors said she believed his "aggressive behavior was escalating."

The documents released show prosecutors from the Contra Costa County District Attorney's Office questioning the four police officers involved about what happened and why they felt firing a gun at Hall was the appropriate thing to do. The officers said they feared for their lives.

Aside from Connors, the other officers at the scene were KC Hsaio, Matt Smith and Melissa Murphy.

Officer Tammy Keagy had not yet arrived at the scene, but her colleagues had been waiting for her because she knew Hall and was being sent to his home to establish a "rapport" with him. Keagy was a 17-year veteran of the police department who was on its Mental Health Evaluation Team. She was also the one whom Taun Hall had befriended three years bfore her son was shot.

Like Keagy, several of the officers who also were called to help had backgrounds in mental health.

For example, Connors is a 12-year-police veteran and part of the department's crisis negotiation team. She also has a bachelor's degree in psychology and worked with mental health patients, including those severely disabled because of psychiatric illness. She was the supervisor that day.

Connors asked Keagy to come so she could establish rapport and possibly calm Hall.

Keagy had already been talking to Hall's family on the phone, but they told her "we've never seen him like this before," the reports indicate.

When Connors arrived at Orchard Lane, she made a plan and assigned each officer to a role: Officer Smith was to use the bean bag gun, Officer Murphy should use the Taser and Officer Hsaio would carry a shield. Connor armed herself with a patrol rifle. But there was no plan to use that.

They were all waiting for Keagy to arrive.

Connors told the group that if Hall didn't listen to Keagy, the bean bag gun would be used. A Taser would be used next. She never said that anyone should resort to a gun.

Hall then appeared at the far end of Orchard Lane with a red shirt on his head and was carrying a metal pole and "acting aggressively, was an immediate danger to residents," Connors told prosecutors.

Keagy was still two minutes out.

Connors used the black SUV to move her team closer to Arlene Lane.

Hall was holding a large pry bar in his hand and he was walking toward officers. He took off his sandals and threw them at the police, the documents state. Then he ran toward the officers with the raised pole over his head. Connors said it was at this point that officers fired their pistols.

Connors said she was five feet away and saw Hall drop to the ground. She chose not to fire because she told investigators that her rifle rounds could have penetrated an officer standing on the other side of Hall.

Officer Melissa Murphy has been an officer since 2018 and holds two master's, one in psychology. And she was the first officer on scene.

She said that Hall was carrying a "Posseiden" stick and would not put it down.

Her colleague fired her bean bag round at him, but it didn't affect him. And since Hall still kept coming at officers, despite commands to drop the pole, Murphy said she fired a round from her Glock 17 9mm pistol. She fired again and stopped when she saw Hall go down.

She said she thought Hall was going to harm her.  She said she felt he would have stabbed her colleagues if she didn't shoot him.

She also told prosecutors that she thought she had her body camera on but she did not.

She was represented by Don Nobles of the Rains firm. No one responded for comment.

When Officer Hsaio was questioned about why he fired, he said he shot two or three rounds at Hall because he felt the young man was going to use the crowbar against his partner.

But Nisenbaum said that in his opinion, the prosecutors didn't press hard enough trying to find out why officers felt they couldn't have resorted to a Taser if the bean bag didn't work.

In a deposition last year that has never before been made public, Nisenbaum showed his line of questioning to Officer Hsaio.

"As you sit here now, is it fair to say that you have no idea why Officer Murphy did not follow her assignment with the Taser? Correct?" Nisenbaum asked in that deposition on July 9, 2020.

Walnut Creek police did not respond to questions regarding the job status of the officers. All were working at the department at the time of the deposition except for Keagy, who had left to work for BART.

Police also did not answer questions about whether the Internal Affairs division conducted its own review of the case or issue any findings of reprimand or discipline.

No charges have been filed against any of the officers, according to DA spokesman Scott Alonso. He said a decision would likely be made "this spring."

Since his death, Hall's family was awarded a $4-million settlement which they plan to use on mental health and racial equity programs for the community. At the same time, they have created the Miles Hall Foundation where they advocate for non-police responses to mental health calls.

The family also has been pushing for Contra Costa County and Walnut Creek to create a mental health response team similar to the CAHOOTS program run out of the White Bird clinic in Eugene, Oregon.

The program has teams made up of one crisis worker and one paramedic who are dispatched 24/7 through the 911 system to respond to crisis calls. They handle about 30,000 calls a year and require police backup in fewer than 1% of cases. No one has been seriously injured in three decades, said White Bird spokesman Tim Black.

"It’s been our experience that just the fact that we are showing up instead of police can really go a long way to de-escalate a situation and get that buy-in from the patients we’re trying to serve," Black told KTVU in a prior interview.

Black said that precisely because the clinical staff do not carry weapons, they arrive at a scene with a "different skill set and different resources," which means that the outcomes will be different, too.