The California Highway Patrol said a possible shooting on the I-580 freeway in Oakland led authorities to close all westbound lanes near the interchange with Highway 13 on Sunday afternoon.

OAKLAND, Calif. - The California Highway Patrol said a possible shooting on the I-580 freeway in Oakland led authorities to close all westbound lanes near the interchange with Highway 13 on Sunday afternoon.

"This guy sat on the door, put his arms up over the hood, and very clearly I saw what looked like a couple of semi-automatic weapons, certainly sounded like it," said the driver, a father of two, whose identity KTVU is concealing for his protection. "I could very clearly see the windows breaking on this car. I could see shells hitting the ground."

It happened three cars in front of him as he was passing the MacArthur Boulevard exit in Oakland on Sunday just before 4 p.m.

"My first thought is, number one I’ve got two little boys in the back seat. I don’t want them to be in the line of fire of this, so I’m trying to back off," said the driver.

The California Highway Patrol has not released much information about the possible shooting. "No details regarding the original call have been confirmed at this time and the investigation is ongoing," CHP's Oakland division said on its Facebook page.

However, a car riddled with bullet holes on its passenger side was visible to a KTVU reporter. 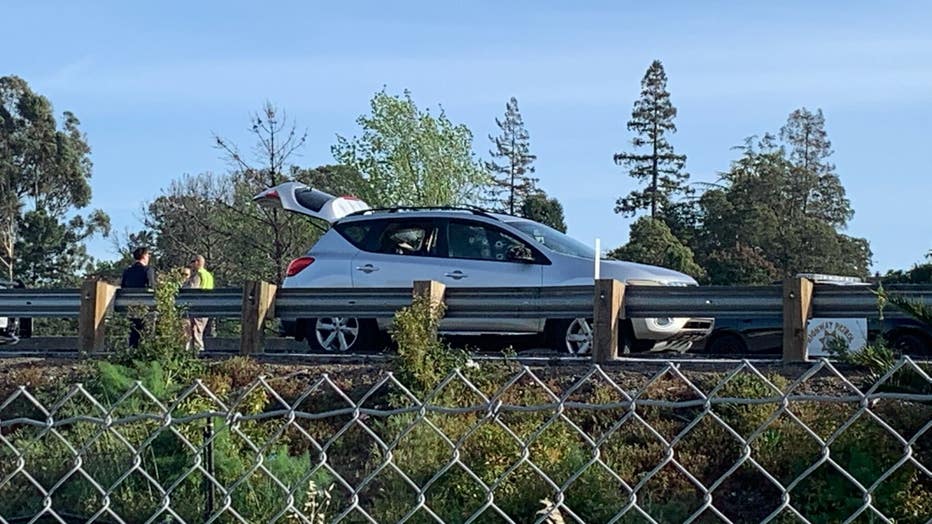 The apparent gunfire, echoed through a nearby neighborhood. A nearby homeowner said he heard a spray of about 20 bullets.

"I kind of hid behind the boat for a second in case there's some cross action," said David Erdelyi. "You know I even told one of the CHP officers that that must have been automatic gunfire because there was a lot of bullets being shed in less than three seconds."

The apparent interstate shooting is just the latest in a series of highway shootings to hit the Bay Area. Gunfire was reported on I-580 in Livermore on Thursday.

I-580 is now back open to traffic. CHP has not indicated if anyone was injured during Sunday's possible shooting or whether a suspect has been identified.