After the dry winter, some residents of the Moraga-Orinda Fire District are preparing to go door-to-door to spread the word about fire safety as part of a new pilot program.

ORINDA, Calif. - Some residents in the Moraga Orinda Fire District are preparing to go door-to-door to spread the word about fire safety.

It’s part of a new pilot program the district has launched to try to reach people on a personal level.

With tinder, dry conditions throughout the state, fires have already started cropping up.

If a fire does occur, this program is aimed at helping people do the preventative maintenance necessary to stop a fire from getting out of control.

In Calaveras County, a 160-acre wildland fire had been threatening property, but mandatory evacuations have now been downgraded to a warning. 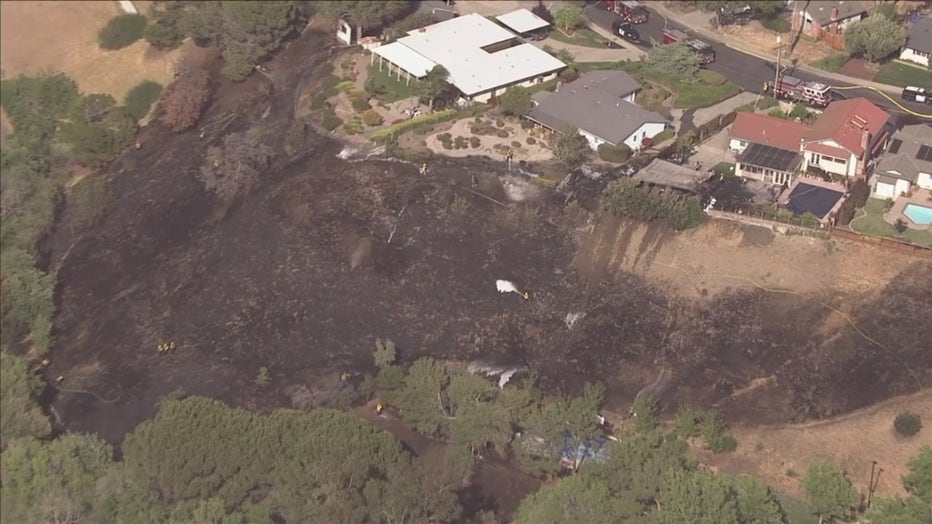 A fire burned near homes Thursday afternoon in Pittsburg.

And in Pittsburg Thursday, a two-acre wildfire climbed a steep hill threatening homes before it was snuffed out.

"We’re preparing for a bad fire season. In addition to those events you listed, two days ago down in Lake Castaic down the grapevine they had a 650-acre fire and the crews on it said it burned like it was the end of August," said Chief Dave Winnacker of the Moraga Orinda Fire District.

A group of them were training in Orinda Friday, preparing to go door-to-door to educate homeowners about specific tasks they can do to make their property safer.

Hammon says he’s learned details he can now pass on to others, like Steven Michelson, a homeowner who got a landscaping tip.

"They were helpful in letting me know some resources in finding plants that I could replace the junipers with that would still provide some privacy but are less fire-prone to ignition," said Michelson.

Volunteer Cristine Hilsinger says many residents don’t seem to be aware of the other costs associated with living in fire-prone areas.

"We actually lost our insurance a few years back and last year mine was doubled so there's that impetus as well," said Hilsinger.

For months, the fire district has been doing controlled burns and removing dry fuels, but realizes it can’t do everything necessary without the public’s help.

So they’re hoping the knowledge they’re passing on through the ambassadors can help prevent something terrible from happening here.

"If we can harness the community's interest and bring it into a system that we understand, and ensure the message is coordinated with our other efforts, that seemed like a really good idea and a win for everybody involved," said Winnacker.

Fire officials say they plan to have volunteers out doing this work through the bulk of the fire season.

They’ll decide later in the year whether it makes sense to make the program permanent.