BROOKLYN, Miss. - It was a homecoming moment that nobody expected but will always remember. A high school senior was being celebrated for a selfless act of love and compassion toward a fellow classmate brokenhearted by loss. 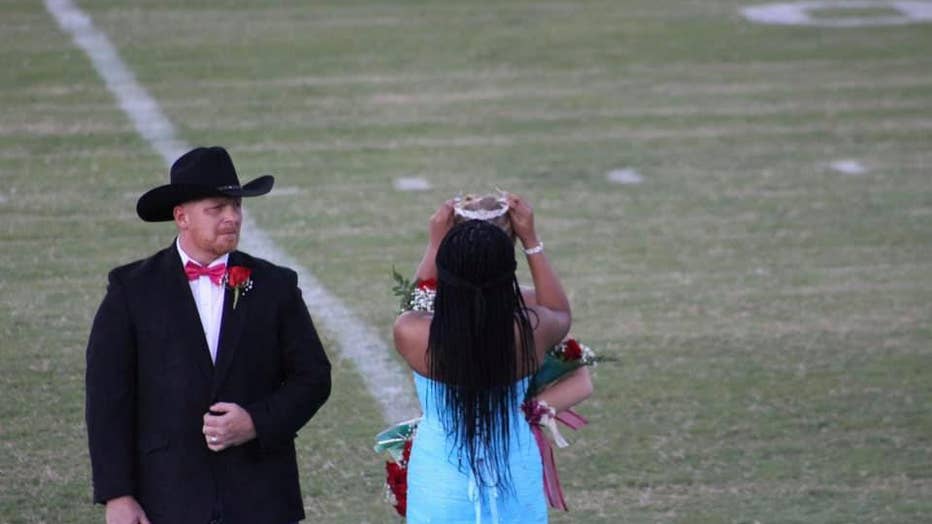 High school senior Nyla Covington, who was voted homecoming queen at Forrest County Agricultural High School on Sept. 24, 2021, hands over her crown to Brittany Walters, who lost her mother to cancer that morning.

Last month, when Nyla Covington was voted homecoming queen by her school, she didn’t think twice before she gave the crown away to another nominee on the homecoming court, a classmate, who just hours prior, had lost her mother to cancer. 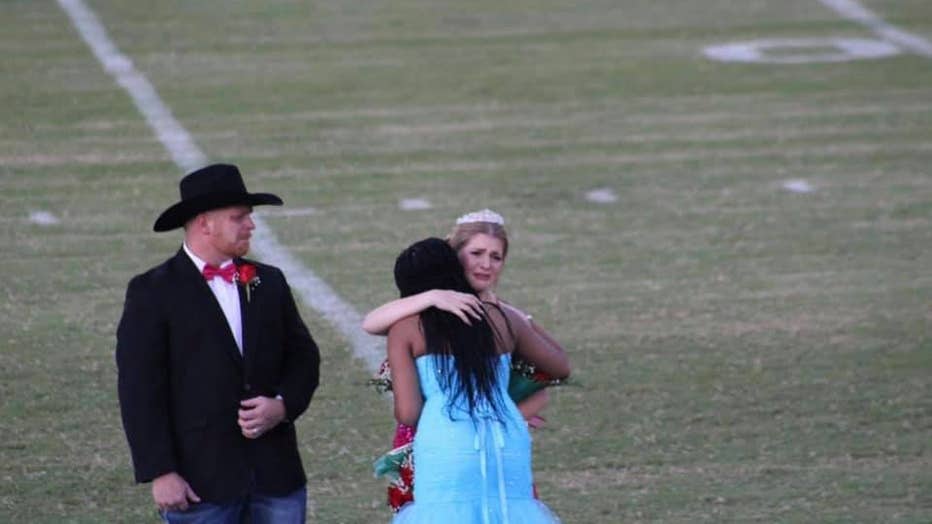 Nyla Covington, who was voted homecoming queen at Forrest County Agricultural High School on Sept. 24, 2021, hands over her crown to Brittany Walters, who lost her mother to cancer that morning.  (Tyra Willamor-Idom)

Photos show Brittany Walters dissolving into tears as Covington turned to her to place the crown on her friend.

"I think she mumbled something along the lines of, ‘I think your mother would want you to have this,’" Tyra Willamor-Idom recalled of the moment during the homecoming for Forrest County Agricultural High School in Brooklyn, Mississippi on Sept. 24. "The entire crowd was shocked and crying," Willamor-Idom added.

FLASHBACK: Teen who lost both legs in crash goes to homecoming, as her inspirational story goes viral

Just minutes prior, after learning that she’d won, Covington was seen walking over to the school’s principal and superintendent asking if she could relinquish her crown. 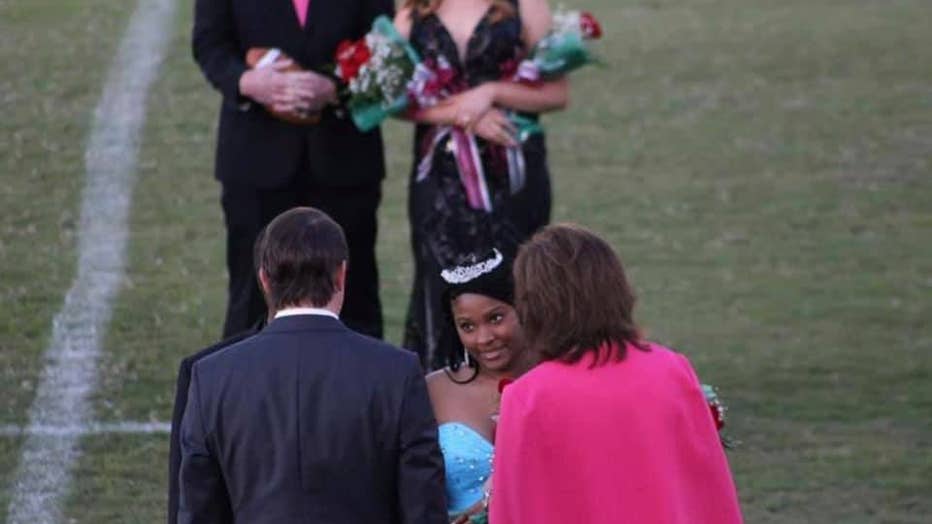 After being named homecoming queen on Sept. 24, 2021, high school senior Nyla Covington asked school administrators she could give away her crown. (Tyra Willamor-Idom)

Assistant Principal Benton Holder said that nobody knew what Covington had planned, in the event she was chosen queen but that her actions were demonstrative of the person she is.

"She's an outstanding student," Holder told KTVU. "I'm not really surprised. It's one of the most selfless things that I've ever seen in my life… There wasn't a dry eye in the stadium."

It was an emotional day for the entire community, which was mourning the loss of Brittany’s mother A.J. Walters, who had died from cancer that same morning. Walters was not only a parent at the school but was also a part of the school staff, working in the office as secretary.

Willamor-Idom, a longtime family friend of the Walters, said that the incredible moment and show of love by Covington was a culmination of a whole community coming together for a family that was hurting.

"It was like everything we wanted but more. The community rallied to get Brittany there even though her mother died hours before," Willamor-Idom explained. "It was actually her mother’s last words before she passed… A.J.'s last wish was to cheer for her daughter on that field."

At one point, Willamor-Idom said that family and friends had all hoped they could somehow get Brittany’s mother to attend herself. In the end, the dying mother had made her husband promise to walk their daughter across the field for the homecoming event.

Willamor-Idom said that the community also rallied together in other ways to help fulfill her friend’s wish for her daughter.

"Crazy part is, Brittany almost never went to homecoming!" Willamor-Idom said. In the weeks prior to the event, A.J. Walters was receiving treatment in Texas at MD Anderson Cancer Center and couldn’t accompany her daughter to get her ready for homecoming, so Willamor-Idom reached out to folks on social media for help.

The call for help received a resounding response, as she was able to raise more than $800 to cover the cost of a homecoming dress and prep, including hair and makeup. The money even helped pay for Brittany Walters’ senior portraits, which her mother was able to see just hours before she died, according to Willamor-Idom.

"Kindness never stops, it creates this beautiful moment that none of us could have DREAMED of," she said.

Willamor-Idom couldn’t help but feel her friend’s presence on the field that day. Photos of Brittany Walters prior to receiving the crown showed her walking beside her father, their arms linked, both their faces overcome with sorrow and grief. But there in that moment, they got to experience a reflection of the mother's presence and the way she lived her life. 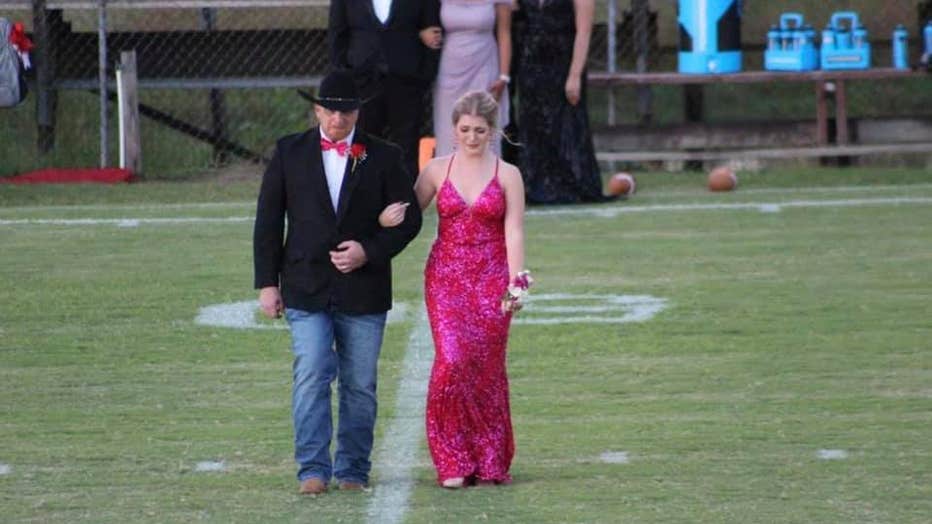 Hours after losing her mother, high school senior Brittany Walters walked arm in arm across her school field for homecoming on Sept. 24, 2021. Friends say the mother's "last wish was to cheer for her daughter on that field."  (Tyra Willamor-Idom)

"I think A.J. was there that day and working through Nyla," Willamor-Idom recalled. "A.J. was a beam of light, she loved people and always showed everyone love. Nyla just listened to her heart and gave selflessly… there was some definite work from a higher being, God meticulously planned all this out weeks ago and made that night just perfect."

This story of friendship, compassion, community and love has reached far and wide, being shared across the country. Through all this, Willamor-Idom said that Covington and her family, who weren't on social media, were unaware of all the attention the teen’s touching act of kindness had received.

"Two very sweet girls who deserve every moment to shine. The world needs to see more of that," Willamor-Idom said. "You know there's always that saying that real queens fix each other's crowns, but the truth is real queens give up their crowns to let other queens shine."