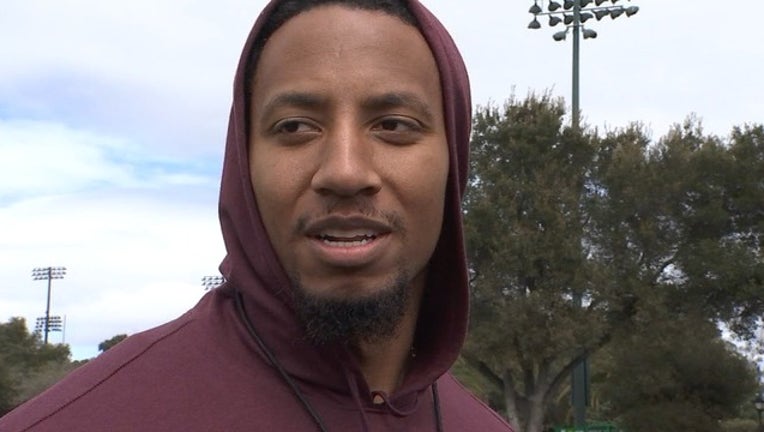 STANFORD, Calif. (AP) - Free agent safety Eric Reid said Thursday he is not planning to protest during the national anthem this upcoming season.

Reid has been among the NFL's most visible protesters since former San Francisco teammate Colin Kaepernick decided not to stand for the national anthem in 2016.

Reid continued the protest of racial injustice and police brutality against minorities by kneeling during the anthem last season as Kaepernick was unable to find a job. But Reid said he will take a different approach in 2018.

"We understand you have to change with the times," he said after watching his brother, Justin, take part in his Pro Day at Stanford.

"I'm not saying I'm going to stop being active because I won't. I'm just going to consider different ways to be active, different ways to bring awareness to the issues of this country and improve on the issues happening in this country. I don't think it will be in the form of protesting during the anthem. I say during because it's crazy that the narrative changed to we were protesting the anthem and that wasn't the case. I think we're going to take a different approach to how we're going to be active."

Reid has gotten no contract offers more than a week into free agency despite a record of strong play on the field and versatility that many teams usually covet.

San Francisco general manager John Lynch said the team is monitoring the market for Reid but the Niners are mostly set at safety with Jaquiski Tartt, Jimmie Ward and Adrian Colbert under contract.

Reid said his agent has heard from a "couple" of teams but money hasn't been discussed and he is still awaiting an opportunity. Reid has said that he understands his activism could affect his employment, especially after watching Kaepernick go unsigned for more than a year.

"I said before, I stand by what I've done," he said. "I know why I've done it. My faith in God is the reason. I can go to sleep at night confident that I did what I was taught to do. I'm just going to stay positive, keep training, keep staying in shape and we'll see what happens."

Reid was a first-round pick by the 49ers in 2013 and made the Pro Bowl as a rookie. He has been a strong player throughout his career, playing strong safety, free safety and even some linebacker last season when San Francisco was short-handed at the position.

He has 10 interceptions and 36 passes defensed in 70 career games.

"Eric played and played well for us last year," Lynch said. "I think he's kind of stuck in a safety market that's been quiet. I would anticipate things starting to shake for him. We'll see."

While Eric Reid looks for a team, he spent Thursday helping his brother prepare for his Pro Day. Justin Reid is considered one of the top safeties eligible for the draft and will likely get picked on the first two days of next month's draft.

Justin Reid said he has visits planned with Minnesota, Philadelphia, Pittsburgh, Detroit, Seattle and Carolina. He also met with 29 teams at the combine but said no one has asked him about his brother or if he would protest during the anthem.

Justin Reid said he's prepared for those questions if they come and that he won't protest.

"We each have our own beliefs," he said. "He felt like that's what he needed to do. I have my own ways that I feel like I'm going to go about it. I'm not as much of a vocal person in that situation. I don't really like drama. I don't want to deal with that."